Photo: Lynnville-Sully's Max Mintle takes his opponent down hard in the highly-contested match against Devin Schall of Martensdale-St. Marys in the 145-pound bracket. Max M. won and finished in first at the sectionals meet held at Colfax to advance to districts.

The Hawks returned to Colfax on Saturday, Feb. 6, for the second consecutive week, this time for sectionals. Freshman Maxwell Mintle earned a first-place finish, while sophomore Gentry Walston and junior Miles Mintle had second-place finishes, and all three advance to districts next week in Pleasantville. The Hawks finished in fifth place.

Maxwell M. (145) started the day with a bye before taking down Clayton Leslie of Collins-Maxwell in a fall in 41 seconds. In the championship round, it was Maxwell M. over Devin Schall of Martensdale-St. Marys in a fall in 2:17, keeping his season alive and advancing to districts. 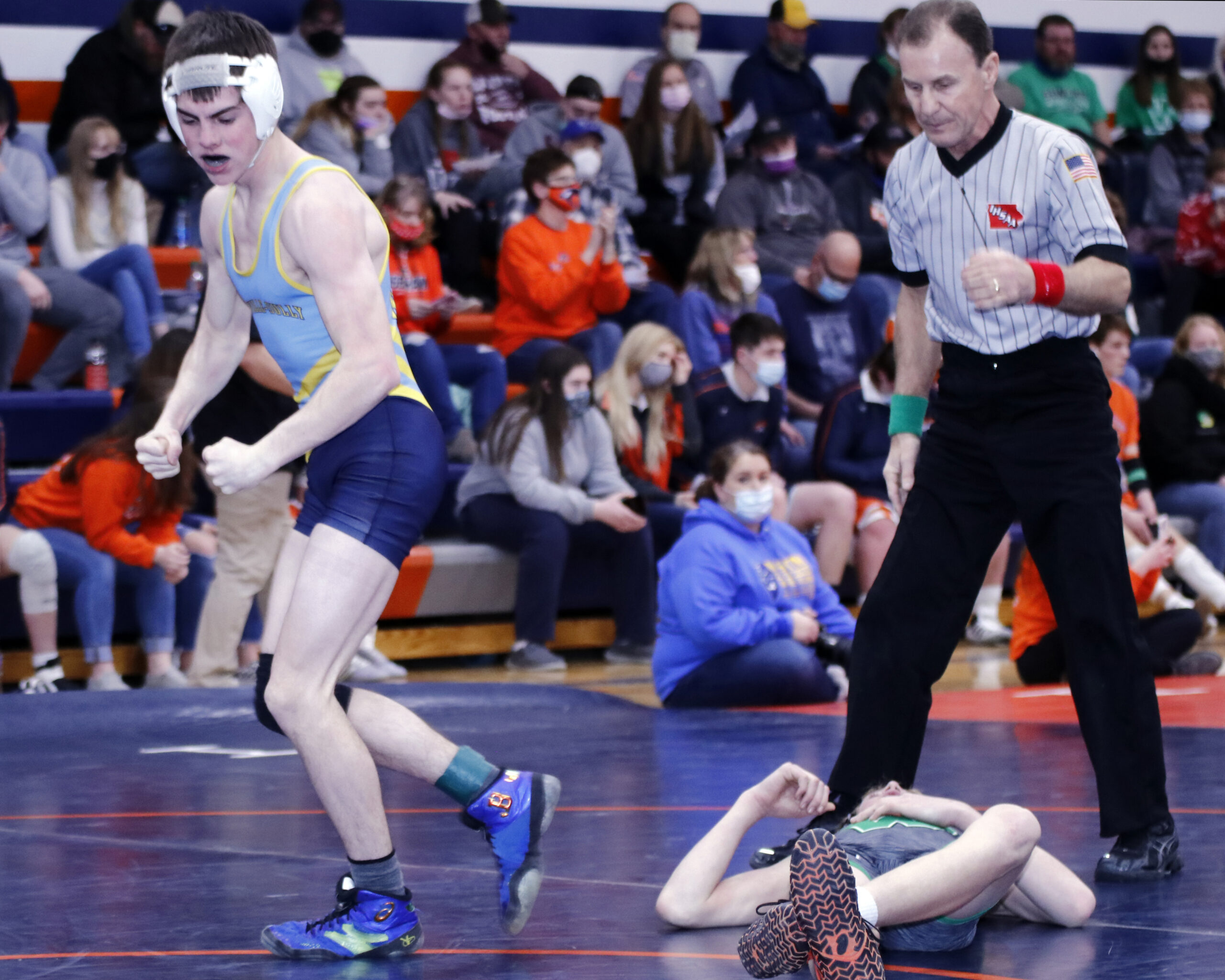 After a bye in the quarterfinals, Walston (113) pinned Ian Schneider of Southeast Warren/Melcher-Dallas in 3:05 in the semifinals. In the finals, Walston fell to Noah Strohmeyer of Colfax-Mingo by decision, 16-7.

He finished the day by defeating Schneider again to claim second place and advance to districts. 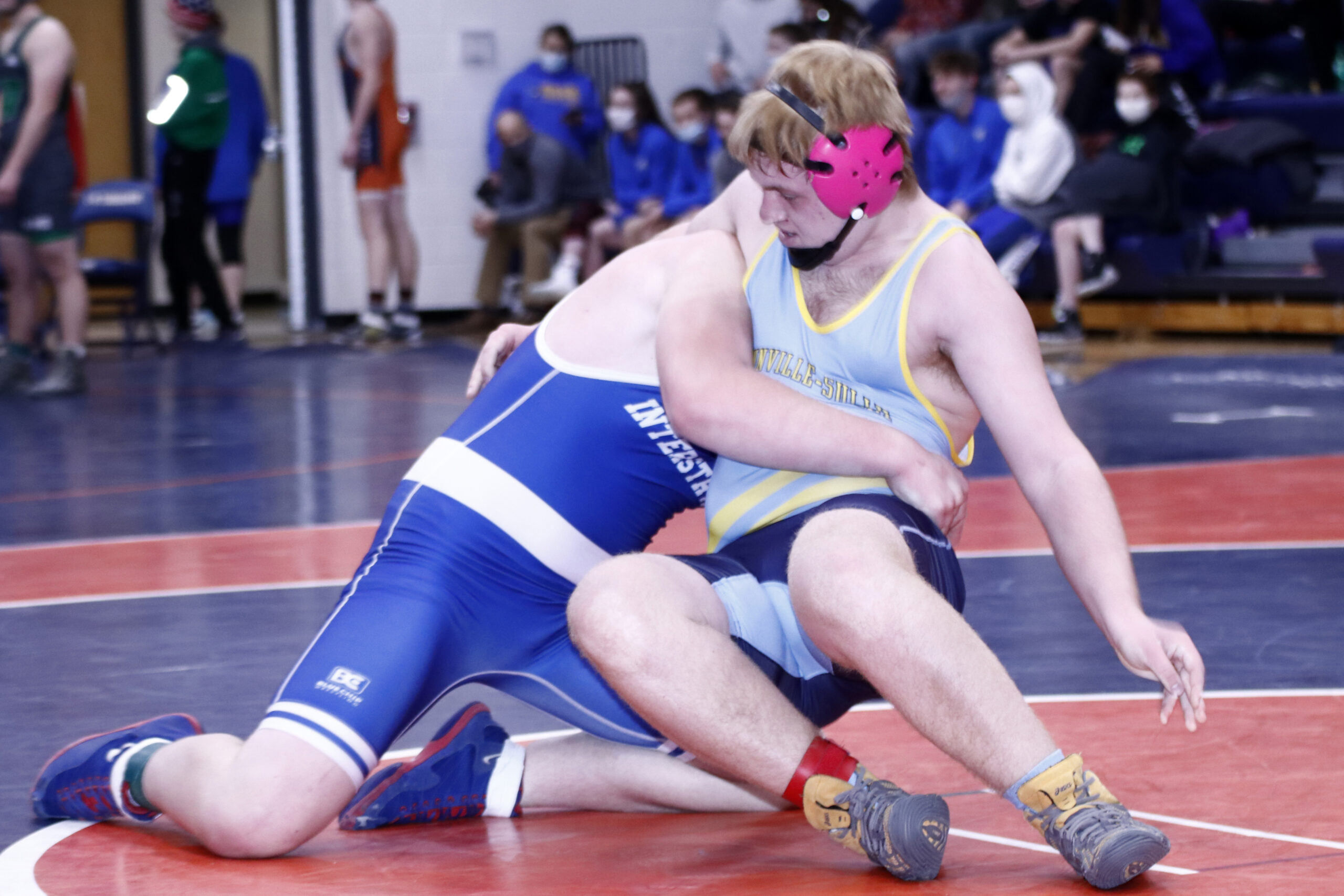 Miles M. (195) received a bye in the first round and took down Gus Mease of Interstate 35 by fall in 2:25 in the semifinals. In the first-place match, it was Logan Montgomery of Southeast Warren/Melcher-Dallas over Miles M. by fall in 2:20. Miles M. bounced back and won by no contest over Mease, to claim second place and advance to districts.

Many L-S wrestlers fell just short of advancing to districts, earning third or fourth. Senior CJ Snethen (138) had a quarterfinal win over Cavan Magnuson of Colfax-Mingo in 1:20. He moved on to the semifinals where he suffered a loss to Nick Steinlage of Interstate 35 by a 16-0 technical fall in 3:08. In the battle for third, Snethen bounced back with a win over Sampson Henson of Martensdale-St. Marys in 1:48.

Sophomore Reese Dunsbergen (152) earned a quarterfinal victory over Melany Vry in 0:46. Dunsbergen fell to Eli Green of Interstate 35, landing him in a third-place match against Johnnie Cassidy of Martensdale-St. Marys, where Dunsbergen emerged victorious in 4:40.

Junior Ty Jones celebrates a win in the third-place match at the sectional meet.

Junior Ty Jones (160) also earned third at sectionals with a win in 3:09 over Ben Wickett of Southeast Warren/Melcher-Dallas in the third-place match, after a bye in the quarterfinals and a semifinals loss to Hunter Stevens of Colfax-Mingo.

Sophomore Caleb Rea (132) had a fourth-place finish at sectionals. In the quarterfinals match, it was Rea pinning Josephine Wearmouth of Martensdale-St. Marys in 1:53, where he suffered a loss in the semifinals to Reuben Smith of Interstate 35. He fell to Nate Dunbaugh of Collins-Maxwell in 2:29.

At 170 pounds, sophomore Kyle Squires fell to Logan Wearmouth of Martensdale-St. Marys by a 6-4 decision in the quarterfinals and received a bye in the consolation semifinals. Squires went on to pin Trystin Anderson of Colfax-Mingo in 4:40 to claim fifth place.

“Everyone wrestled really well on Saturday,” said L-S Coach Jason Walston. “We are sending three to districts who have a really good chance to make it on to state. We also put six of eight wrestlers on the podium, which is great.”