Three starters return to the L-S varsity girls basketball team this year and look to lead the Hawks to a solid season on the court.

The Hawks ended their 2016-17 season with a record of 21-3 and were one game from the state tournament. The team graduated two seniors, Brenna Lanser and Jelissa Rozendaal. 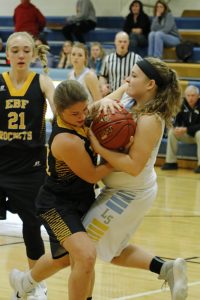 L-S sophomore Janelle Rozendaal fights for possession of the ball with an E-B-F Rocket.

This year’s varsity squad is made up of 12 girls, including four returning seniors: Jataya Meyer, Christine Nikkel, Camryn Russell, and Mariah Vos. Russell and Vos are returning starters, along with junior Carson Fisk.

“I’m really excited for this year because of the players we have returning this year,” Russell said. “We have experience and athleticism. We have a lot of great things going for us this year, and we are looking forward to getting started.”

This will be L-S Coach Jerry Hulsing’s 27th year coaching at Lynnville-Sully.

“I’m excited about our athleticism and our ability to play fast,” he said. “We will play an up-tempo style of basketball.”

The team is looking to improve on last season by making an appearance at the state basketball tournament at Wells Fargo Arena. They came up one game short from the state tournament last year, losing to Bellevue Marquette Catholic, 53-46. 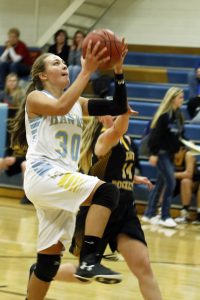 Senior Mariah Vos goes up strong for a layup against the Rockets. Vos scored two points and had one rebound in the half game.

“I’m super excited for this year’s team,” Fisk said. “Our goal as a team this year is not just to make it to the state tournament, but to focus on being strong defensively and winning ugly games. This year’s team is going to be focused on a lot of teamwork, trust, and accountability. We’re not just a team, we’re family, and I’m ready to push myself and each and every girl out there.”

JAMBOREE HALF GAME VERSUS E-B-F

The Hawks opened their 2017-18 basketball season with a jamboree at Sully on Monday, Nov. 13. In a half game against Eddyville-Blakesburg-Fremont,

L-S dominated, 34-11. Coach Hulsing saw the jamboree game as a good start to the season.

“We started a little slow, but once we started communicating on defense, we were able to get some turnovers and ran the floor well, leading to some easy baskets,” he said.

The coach would like to see his team’s half-court offense move the ball better to help his players get good looks at the basket.

As a team, the Hawks had 21 rebounds compared to E-B-F’s 18. Cunningham pulled down four on the boards, and Fisk had three. 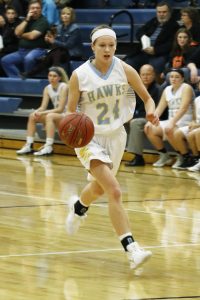 Junior Carson Fisk brings the ball up court for the Hawks in the half game against E-B-F on Monday, Nov. 13. She was the leading scorer.

The girls’ first official game of the year is this Friday, Nov. 17, at home versus Iowa Valley. The next game will be at Baxter on Tuesday, Nov. 21, before they take a break for Thanksgiving.