Twenty years after a run at the state tournament title, members of the 1995-96 Lynnville-Sully girls basketball team returned to their home court on Friday, Jan. 22. The eight players present as well as coaches Jerry Hulsing and Duane Brand were recognized and thanked during half-time of the varsity boys basketball game.

As one of the most accomplished girls basketball teams in school history, the 1995-96 team reset the standard of excellence at L-S High School. Competing in the Des Moines River Conference in the conference’s final year of existence, the Hawks ran the table, en route to the conference title and an undefeated 17-0 mark. With their signature man-to-man defensive pressure setting the tone, the girls went on to secure a ticket to the state tournament – the third such trip in school history. 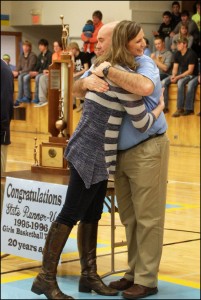 Gena (Fiihr) Schmidt embraces L-S Head Coach Jerry Hulsing, who led the 1995-96 girls basketball team to the state tournament during his fourth season with L-S. Schmidt’s experience at state that year was marred by a broken nose in the opening tip-off of the semi-final game. PHOTOS BY TAYLOR PHOTOGRAPHY.

After two wins at state, the Hawks entered the title game with a perfect 23-0 record and faced a talented Winfield-Mount Union team. The two championship-caliber units slugged it out for 32 minutes, with the Hawks falling just points short of their ultimate goal.

Overall, team chemistry and focus were exceptional all season. The Hawks led the state in defensive scoring average at 32 points/game. A supportive community followed the team faithfully.

Members of the 1995-96 state basketball runner-up team are listed below: