Lynnville-Sully’s Mary Kate Shaver is headed to state after edging herself into the top 15 at the state-qualifying meet in Ottumwa last Thursday, Oct. 19. The senior also helped lead the girl’s team to a solid fifth-place finish out of 11.

Shaver got out with the top 10 early in the race, crossing the one-mile mark in 12th.

“She understood what it was going to take to make that top 15 and get to state,” said L-S Head Coach Darin Arkema. 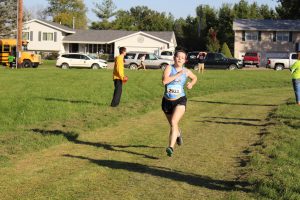 Senior Mary Kate Shaver gives her all at the state-qualifying meet last Thursday. Shaver punched her ticket to state by placing 15th. Overcome by heat, Shaver passed out a few minutes after her race, but quick thinking by L-S parents and a few strangers got ice and water to her to cool her down and revive her.

With 400 meters to go, Shaver was in 15th with a runner trying to catch her. Giving it all she had, she sprinted to the end and punched herself a ticket to state in a time of 22:19.

“After I had learned that I qualified for the state meet, I was ecstatic,” said Shaver, who is new at L-S after moving to the area from Illinois. “It felt as though all my hard work had paid off, and since it is my senior year, my qualification felt even more rewarding.”

The L-S girls earned fifth, two spots from qualifying for state. A highlight for them was beating conference champ Colfax-Mingo.

“The girls’ race had some of the top teams and individuals in the state. We couldn’t be focused on just Colfax-Mingo,” Arkema said. “I was proud of the girls for how they responded, getting out in the race and in position to challenge other teams and themselves.” 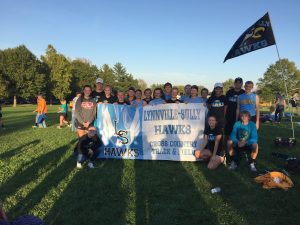 The L-S cross-country team at the state-qualifying meet.

Freshman Megan Van Zante was just five places from a spot to go to state. Van Zante placed 20th and crossed the finish line at 23:13 after a tremendous final kick over the last 150 meters. Behind her was sophomore Abby Gruver in 35th, running the race in 24:13.

Senior Haley Breeden ran the last race of her career, placing 55th with a time of 26:08.

The top school in the girls’ race was Hudson, followed by Denver, Pekin, and GMG. 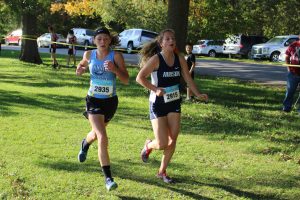 “I am very proud of the girls for their strong fifth-place finish,” Ar-kema said. “Those four teams in front of us tonight have some great runners and have worked really hard to make themselves better. We will say goodbye to a number of seniors, but those returning next season have seen what it takes and hopefully have the desire and commitment to continue working to bring our program to that level.”

Like he has done all year, senior Josh Dunsbergen led the L-S boys team and ended his career after a hard-fought race. Despite getting caught in the middle of the pack early on, Dunsbergen earned himself a time of 19:37, placing 40th.

“I cannot say enough about how Josh has been there as a leader for our team the last two years.” said Arkema. “He was beginning to understand himself and his capabilities as a runner.” 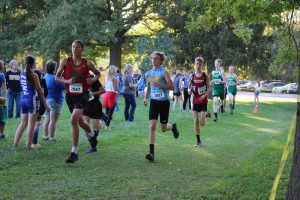 Junior Joseph Anderson ran his best race of the season in 20:33 and placed 52nd. Not far behind him was freshman Mason Jansen in 20:48, earning 58th. Sophomore Blaize Kuhlmann also ran one of his best races of the season, placing 76th in 21:47. Freshman Luke Kramer finished strong in 25:15 and placed 111th.

“All of those guys who could be returning next year learned a tremendous amount this season, Arkema said. “They all could be so much better next season by getting the full summer training in. They need to see their potential as individual runners and as a team and show just how improved and good they can be next year.” 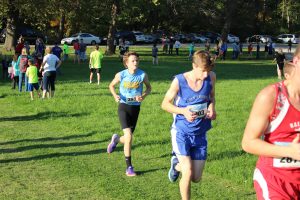 Junior Joseph Anderson puts up his best race of the season at the meet last Thursday.

Now that the season has come to a close for all but one, the focal point of the team shifts to supporting Shaver at state. She will run at 2 p.m. on Saturday, Oct. 28, at Kennedy Park by Fort Dodge.

“I am a little nervous for the meet on Saturday, but my excitement greatly outweighs any nerves I have entering into the race,” Shaver said on Tuesday. “I am so happy to be ending my high school cross-country career at the state meet.”