The Lynnville-Sully boys picked up a couple of conference victories last week but ended the week with a loss to Class 2A Albia on Saturday.

The boys went on the road for another win against the Braves on Tuesday, Jan. 16. Showing their dominance for the second time this year, the Hawks triumphed over conference opponent Montezuma, 55-45. 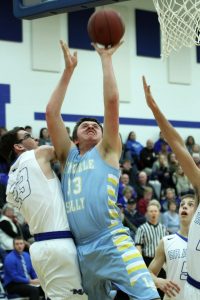 The Hawks led throughout the game, up 10-7 after the first and 28-23 at the half, but the Braves were always close and even outscored L-S in the third quarter. In the fourth quarter, the Hawks broke away and finished the game up, 55-45.

"We struggled to get things rolling offensively, but the guys found other ways to get it done. We fought hard defensively and on the boards," said head coach Nick Harthoorn. "When they fouled us, the guys stepped up to the line and knocked them down."

Together, the boys totalled 41 rebounds, five blocks, and four steals. They were 16-of-49 from the range and an impressive 21-of-22 from the free-throw line.

In their second SICL game of the week, the Hawks hosted North Mahaska on Friday, Jan. 19. The boys easily defeated the Warhawks with a final score of 68-31.

“We got off to a good start in the first quarter,” L-S Coach Harthoorn said. “When the guys bring the energy on the defensive end, good things happen for this group. Hopefully, we can continue to take care of the basketball and share the basketball on the offensive end.” 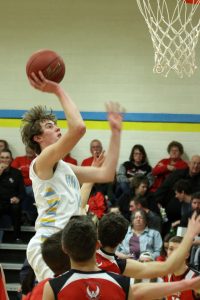 “We started off playing really good offense and defense,” said Van Wyk. “We kept the pressure up the entire game, preventing the Warhawks from getting a lot of easy baskets. The team was able to drive and make easy points, allowing us to score so much.”

The leading scorer of the night was James with 15 points. Senior Hansen scored 11 points, and senior Tanner Foster scored 10 points. Van Wyk put up nine points for the team, and Vander Linden had seven points. Altogether, the team had 36 rebounds and 15 assists.

“Coach says that good defense will lead to good offense. When we played North Mahaska, we brought good defense with us,” Foster said. “We were also able to find the basket that night, and that led to us scoring a lot of points on our end.”

A short day later, the boys suffered a loss while hosting Albia on Saturday, Jan. 20. The Hawks were at a disadvantage early on in the game, behind 18-13 after the first quarter. They made up ground in the second and third but were unable to catch up, taking the loss, 65-57.

"Albia played a nice game tonight. They had some guys step up for them," commented Harthoorn. "We didn't bring the defensive intensity early on, and that allowed them to get it rolling."

Free throws were important as the teams totalled 40 fouls; L-S had 21 of those fouls, 15 of them coming in the second half. The Hawks were 13-of-18 from the free-throw line. The team shot 19-of-51 from the range and totalled 30 rebounds. L-S was able to limit their turnovers to eight and had four steals.