Lynnville-Sully’s first trip back to the UNI Dome since 1986 is a memorable one as the Hawks clawed their way back from a 14-0 deficit and tied it up, 14-14, going into the fourth quarter

Resilient. Tenacious. Battle-tested and proven - all words to describe the players and coaches of the Lynnville-Sully football team that put forth a tremendous comeback and fell just short on the final drive of the Class A football semifinals held at the UNI Dome on Thursday, Nov. 10. The Hawks faced top-ranked and defending Class A champs West Hancock, and the two teams battled to the final seconds in one of the most memorable semifinals game in Iowa High School state football history. The Hawks put up 14 unanswered points in the third quarter to tie the game going into the final 12 minutes of play, but fell just short, 22-14, to end Lynnville-Sully’s phenomenal season.

Lynnville-Sully Hawks’ memorable football season came to an end after an impressive comeback fell short in the Class A state semifinals game. The Hawks fell, 22-14, to top-ranked and defending champs West Hancock in front of a large crowd of loud and proud L-S fans at the UNI Dome on Nov 10.

The Hawks had a rough start – three and out with only three yards gained – and was forced to punt. Senior Conner Maston booted the ball 32 yards, which was returned to Hawks’ 35-yard line. West Hancock charged ahead and put the first points on the board after just six plays. L-S denied the two-point conversion, but were down by six early.

Senior Kyle Squires returned the Eagles’ kickoff six yards to start a drive at the Hawks’ 34-yard line. After consecutive false starts, the Hawks found momentum with a 33-yard run by junior Corder Noun Harder, who utilized his blockers, speed, and skill to cross midfield. That momentum was shortlived when an interception gave the ball back to the Eagles. West Hancock was moving down the field with ease until a fumble forced by Maston slowed the progress. Noun Harder then had a tackle behind the line of scrimmage to send the Eagles back three yards. On third and 10, the Eagles decided to air it out. Maston leaped for the interception at the seven-yard line to halt the Eagles’ seven-play drive. L-S then moved the chains on consecutive run plays by Noun Harder, who gained 32 yards, and senior Kyle Squires with a 12-yard gain. L-S got another first down on a 10-yard carry by Squires. The Hawks bailed themselves out of a third-and-13 situation when sophomore quarterback Lannon Montgomery connected with Maston on a 14-yard reception to move the chains. West Hancock’s defense stepped up, and the Hawks turned it over on downs shortly before the first quarter closed.

West Hancock’s skilled quarterback was tough to stop all game, and he let his legs do the work on the Eagles’ next scoring drive. With 8:24 left in the half, the Eagles scored again to go up, 14-0.

The Hawks’ next drive was highlighted by 17- and 20-yard gains by Noun Harder, but stalled at the 26-yard line. L-S attempted to get on the board as the first half closed out, but the 42-yard field goal off the foot of junior Lucas Sieck missed. West Hancock came charging back, and its quarterback was like a freight train moving the ball up the middle. Squires and junior CJ Nikkel broke through the line and got a tackle for a four-yard loss, followed by Squires teaming up with senior Jacob Fogle to send the Eagles back three more yards. At third and 17, senior Caleb Rea picked off a West Hancock pass and ran the ball 26 yards to the 28-yard line. The Hawks were moving the ball ahead before two false start penalties halted progress. The Hawks were trying to claw back from third and 20 when time ran out. L-S went into halftime trailing, 14-0.

Both teams traded fumbles to start the second half. Senior Lane Fisk forced a fumble that was recovered by Rea, but then L-S fumbled on its next drive. Lynnville-Sully’s first scoring drive in the third quarter started with senior Tyson Jansen recovering an Eagles’ fumble forced by Squires at the line of scrimmage. A short gain on the run followed by a quarterback sack for a seven-yard loss put the Hawks at third and 16. Montgomery connected with Noun Harder, but L-S was still short of the first down. The Hawks were set to punt when an encroachment penalty gave L-S the first down at the 14-yard line. The Hawks capitalized – Maston caught a 14-yard pass from Mont-gomery and lunged across the endzone for the first Hawk touchdown of the game. The two-point conversion failed, but the Hawks put six points on the board with 4:50 left in the third quarter and felt a renewed spark.

With momentum on its side, Lynnville-Sully defense played big and got a big stop on third down to force West Hancock to punt. The Hawks’ pressure was relentless, and Maston  blocked the punt, which was recovered by senior Mathias Torres. With great field position near midfield, the Hawks strung together their second and tying scoring drive with nine seconds left, but not without adversity. An incomplete pass was followed with yet another false start on the Hawks to put them behind the sticks. Montgomery looked for Maston again on the next play. Maston hauled in the short pass and sprinted to the endzone for a 59-yard touchdown that put the Hawks within two points as time ran out in the third. 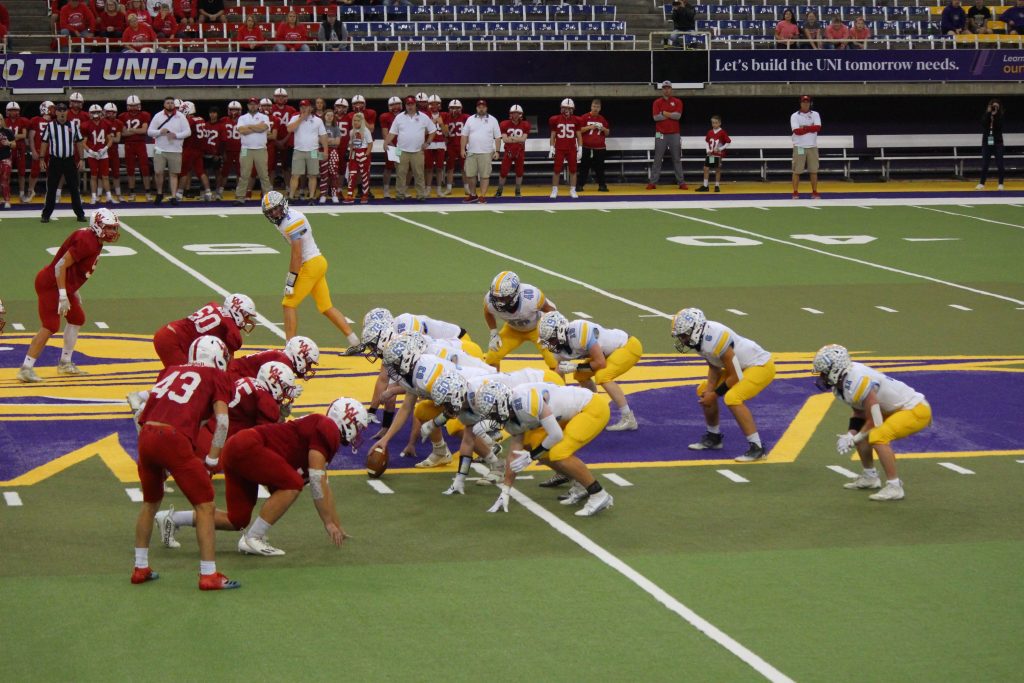 The Hawks line up in the Class A semifnals at the UNI Dome on Thursday, Nov. 10. The Hawks found themselves in an early defecit, 14-0, but put together a thrilling comeback to tie the game going into the fourth quarter. L-S had one last shot at the endzone, but an interception in the final seconds put the game out of reach in the 22-14 loss.

The Hawks needed the extra two points to tie the game up, and the L-S coaches dialed up a play. Montgomery lobbed a high pass into the corner of the endzone and Maston made a spectacular one-handed catch to tie the game. The play sent the Hawk crowd wild and on its feet as the teams were now even.

The fourth quarter started with the Hawks tied 14-all with the defending champs. The Eagles responded by eating up much of the fourth quarter on a 75-yard, 13-play scoring drive that ended with a late touchdown.

With the clock winding down, the Hawks set forth on a 16-play drive. Rea and Noun Harder received consecutive short passes, but the Hawks were still short of the first down. On fourth and three, the Hawks went for it, scrambled, and Montgomery passed to Rea for the first down. A 10-yard run by Noun Harder was called back on a holding penalty. Rea hauled in a 12-yard pass followed by a good run by Squires to move the chains. On second and 10, Noun Harder weaved through traffic for a first down. Nikkel gained five yards on a run before Squires found a hole in the middle to move the chains. Two plays later, Squires fought hard for another first down. There was no running room for Noun Harder on first and 10, and on the next play, he was sacked for a loss looking to pass. The Hawks took a timeout with 41 seconds left in the game to draw up a play. Their final play on third and 20 ended with a pass thrown into heavy coverage and intercepted at the goal line. The Hawks’ comeback fell just short in the 22-14 season-ending loss.

For just over two hours on Thursday, every member of the team gave it their all and left everything on the field. Coach Mike Parkinson said, “It was a really special game, and the effort that was put into making a comeback will never be forgotten. The guys played their hearts out and came so close to achieving yet another goal. It was very evident our team bond was strong even when down.” The Hawks were down 14 points at halftime and dominated the third quarter to tie it up, all to the delight of Hawk fans who filled the visitor’s side of the stadium. “It was a great experience for our program and team, and we are very grateful for the chance to play in the Dome. It is a memory they will never forget. Thank you to all of the parents, students, and community members who showed their support at UNI; it helped push ourselves to the end,” said coach Parkinson.

Lynnville-Sully netted 189 yards on the ground and 151 yards in the air. Montgomery went 12 for 21, throwing two touchdown passes and two interceptions. Noun Harder, despite being keyed on, led the team in rushing with 155 yards on 25 carries. Squires averaged 5.4 yards per carry and finished with 44 hard-fought yards. Nikkel had one carry for five yards.

Maston put together an impressive five-minute stretch in the third where he caught two passes, scored twice, and blocked a punt. He was the Hawks’ leading receiver with 87 yards. Rea caught four passes for 33 yards, Noun Harder hauled in two for 23 yards, and Squires had an eight-yard catch.

Squires, one of the Hawks’ leading tacklers, made more noise at the Dome with a game-high 10.5 tackles. Noun Harder and Maston played tough with 10 and nine tackles respectively. Fisk was credited with 8.5 tackles and forced a fumble. Maston forced a fumble, blocked a punt, and intercepted the ball, and Rea also had a pick. Fumbles were recovered by Rea and Jansen.

The feats accomplished in the 2022 season cannot be overshadowed by the Hawks’ loss one game short of the championship title game. L-S, led by 11 seniors, set high goals and was relentless in their pursuit of the District champs title, an undefeated regular-season record, host of three playoff games where they outscored opponents 131-49, and playing in mid-November at the Dome...all goals teams dream of, L-S accomplished them.