Lynnville-Sully sent three runners to the state cross-country meet – the most since 2013 – and L-S Coach Darin Arkema couldn’t be prouder of their performances at the Saturday, Oct. 30, meet held at Lakeside Municipal Golf Course in Fort Dodge.

“It was a gorgeous day to conclude the season,” said coach Arkema.

The gorgeous day included picture-perfect weather of sunny skies, light winds, and seasonal fall temperatures for the trio of L-S juniors to wrap up cross-country seasons among the best in Class 1A. Greenlee Smock, James Gruver, and Zach Morningstar took advantage of the great conditions and relied on a season’s worth of conditioning for their final races of 2021. 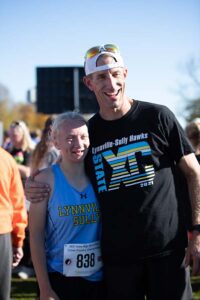 Junior Greenlee Smock, running in her third state meet, gets a hug of congratulations from Lynnville-Sully's head cross-country coach, Darin Arkema, following the race. Smock's 13th-place state finish was her third top-15 placement and all-state honor in as many years.

Lynnville-Sully’s trio of junior cross-country stars – Greenlee Smock, James Gruver, and Zach Morningstar – took advantage of a gorgeous Saturday afternoon on Oct. 30 at the state cross-country meet at Lakeside Municipal Golf Course in Fort Dodge. The three runners proved why they are leaders of their team and sport.

Smock, a three-year veteran of the state meet, ran a nearly identical race as she’s done in the past at state. “She just keeps pushing herself and works her way up into the top 15,” said L-S Head Coach Darin Arkema. “She trusts herself and that strategy.”

Her strategy paid off, and she cruised to a 13th-place finish in Class 1A in a time of 20:09. Her top-15 placement in a field of 150 runners earned Smock all-state honors, the third such recognition of her high school career. Looking ahead to Smock’s senior season next fall, coach Arkema said, “There is no doubt she will be looking to finish her career next season with the same honor.”

Gruver and Morningstar were among 156 other Class 1A runners fighting for position in the boys’ state race on Saturday. 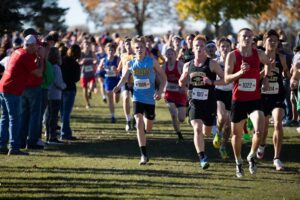 James Gruver got off to an agressive start and ran his way to a new personal best time, shattering his old PR by 16 seconds.

Gruver got out to an aggressive start, putting himself near the top-15 by the first-mile marker. Gruver at one point was running in the 11th-place spot. He couldn’t quite maintain the top-15 pace, but that aggressive start meant he shaved 16 seconds off his previous best time to finish in 30th place with a time of 17:30. Saturday’s race marked Gruver’s second state cross-country appearance – last year, he finished in 61st place at the state meet. As a junior, Gruver’s finish was 42 seconds faster and 31 places better than in 2020. “Just a tremendous improvement by him from last season,” said coach Arkema. “Hopefully he has a little more fuel to work for even more in his final high school season next year.” 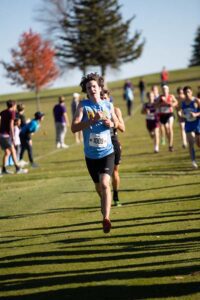 Zach Morningstar placed 89th to finish in the top two-thirds of finishers with a time of 18:35.

Morningstar was running in his first state cross-country race of his career on Saturday. The junior found himself with little room to maneuver at the start of the race as he was running congested with a swarm of other competitors. Morningstar kept his composure, despite getting tripped up and slipping to the ground, not even a mile into the race. He showed his strength over the second half of the race to finish in 89th place with a time of 18:35. “He finished in the top two-thirds,” said coach Arkema. “I know he will be ready to work for an even faster time and higher finish next year.”

Reflecting on the day of his athletes’ great performances, coach Arkema said, “It was just a great day for these three and our program to cap off the season. This experience will hopefully not only encourage the three of them, but each of their teammates to want more and to give more of themselves between now and next season to be better.”

Callista Hackert was the only graduating senior on this year’s cross-country squad. For the girls, Arkema should have a solid core of runners returning next fall, including Smock, juniors Kinsley Tice and Kendra Fikse, sophomore Brooke Conover, and freshmen Olivia Norrish and Corrina Rozendaal. Along with Gruver and Morning-star, the boys team this year consisted of juniors Evan Fikse and Gentry Walston, and freshman Vance Scholten.