Last week’s schedule for the Lynnville-Sully girls basketball team was not just busy, it was challenging as well. The Hawks fell to two ranked teams from Class 1A who also happen to be conference rivals. The girls were able to shake off the losses for a 31-point win over Albia to finish the week.

The week started at No. 9-ranked Montezuma on Tuesday, Jan. 16, for a rematch against the Bravettes. In the first go-around earlier in the year, the Hawks took a loss, 50-25. Despite hard efforts and a change in defense this time around, the Hawks were unable to come out victorious, 58-36. 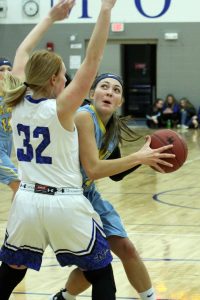 L-S started the game well and went into halftime behind by just six, 23-17. Defensively, the Hawks took a different approach than their standard man-to-man, instead forming a 2-3 zone. L-S moved into the third quarter down 39-31 but lost control in the fourth, ending the game behind, 58-36.

"We were close for three quarters but had too many defensive breakdowns, and we didn't rebound well in the fourth quarter," said head coach Jerry Hulsing. "Then we stopped attacking the rim on offense so we stopped scoring."

"We did some nice things in the game early but need to figure out how to maintain it for four quarters against a good team," commented Hulsing.

A devastating third quarter hurt the L-S girls as they hosted North Mahaska on Friday, Jan. 19. The Hawks were looking to avenge a 52-43 loss to the Warhawks from Dec. 1 but ended up falling, 69-57.

L-S came out fast and started very well playing with sound defense and winning the first half. They led 13-10 after the first quarter and extended their lead to eight by halftime, 28-20. North Mahaska came out with a vengeance, however, and outscored L-S in the third quarter, 32-8. L-S bounced back by outscoring North Mahaska 21-17 in the last quarter, but it wasn’t enough to regain the lead. 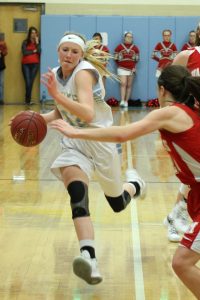 “We came out really strong in the first half,” said Russell. “We were confident, comfortable, and ready to play. The second half, we ran out of steam and couldn’t dig ourselves out of the hole.”

One of the biggest differences in the loss was North Mahaska going nine-of-12 from behind the arc, scoring 27 points on threes alone. The Hawks only made one three the whole night, coming from Cunningham.

Vos led L-S in the scoring column with 21 points, with Cunningham next at 11. Russell had seven points.

The Hawks had 37 rebounds total, led by Van Dyke’s 10. Behind her were Vos and Cunningham with six apiece.

“The first half might be as good as we had played all year; we didn't rebound the ball very well, but we played good defense and offense,” noted Hulsing. “In the third, we got tentative and stopped attacking, and NM could not miss. I was very proud of the girls on how they responded in the fourth, coming back and winning the quarter. It shows what great character they have and desire to compete because a lot of teams would have quit competing. I am really proud of their efforts.”

The next day, the girls hosted 2A Albia. They had no trouble beating the Blue Demons, 50-29. L-S started strong, gaining a 28-12 advantage at the half. The Hawks were outscored in the third, 12-11, but maintained the upper hand and came out with another win.

"The girls played well tonight even being short-handed and playing some different roles," said Hulsing. "I was really happy with our defensive rotations tonight, and we boxed out pretty well."

Cunningham made two-of-three three-pointers to contribute to her 16 points. Vos had a double-double night, scoring 12 points and pulling down 11 rebounds. Classmate Jataya Meyer chipped in nine points, and Russell put up five.

L-S outrebounded Albia 39-27 and showed their aggressiveness with 12 steals. The team was five-of-14 in threes and seven-of-13 from the free-throw line.