For self-described “running nerd” Alexa Vander Leest, competing in the 2018 Boston Marathon was a “dream come true” on Monday, Apr. 16. That says a lot about how much the race meant to the 22-year-old, considering conditions on race day were downright miserable.

As if running 26.2 miles wasn’t enough of a challenge, participants in the 2018 Boston Marathon also had to battle extremely wet, cold, and windy conditions. That included a temperature reading of 38 degrees at the start of the race. Vander Leest, however, soaked in the experience and relied on the training she had done throughout the Iowa winter to prepare her for the race.

A December 2017 graduate of Calvin College with a bachelor’s degree in graphic design, Vander Leest currently lives at home in Lynnville. That’s where she operates Alexa Karen Photography & Design, her own photography and brand design business, doing work across the Midwest. 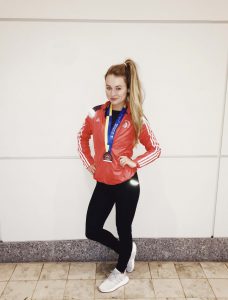 While the 2014 Lynnville-Sully alum has experienced her fair share of competitive running events, nothing could compare to the Boston Marathon.

“I knew this was a big race, but I didn’t understand just how big until I actually got into it and was surrounded by runners for as far as I could see on the road ahead of me,” Vander Leest said. “Between the thousands of runners, the iconic course lined with dedicated, screaming fans, and the absolute pouring rain, the environment was electric – to be honest, it felt a bit like a movie!”

Running has been a part of Vander Leest’s life for a long time. She ran competitively in junior high and high school at Lynnville-Sully and went on to run a year at the collegiate level as well.

After that, Vander Leest took on the challenge of a marathon for the first time, completing the Grand Rapids Marathon in 3:30:37 in October 2016. That time qualified her for the 2017 Boston Marathon, but registration for the event had already closed. That meant she had to wait nearly a year before she could register for the 2018 Boston Marathon.

“The registration for Boston is super competitive because there aren’t enough spots in the marathon for everyone who qualifies; they take the fastest qualifiers in each age division until the race is full,” Vander Leest said. “So when I got the email in the early weeks of October (2017) that I had made it into the 2018 Boston Marathon, I literally jumped around for a few minutes because I was so happy.” 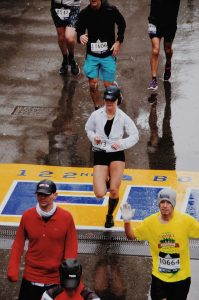 Vander Leest crosses the finish line of The Boston Marathon after more than 3.5 hours of running.

According to “Runner’s World” – a magazine Vander Leest has subscribed to since she was 13 – it was much harder to get into the 2018 Boston Marathon than it has been in previous years: “For the fifth year in a row, achieving a Boston Marathon qualifying time wasn’t fast enough to actually enter the race. Runners accepted into the 2018 edition had to be 3 minutes and 23 seconds under their age-group standards in order to toe the starting line...”

When she found out she was officially accepted to run the 2018 Boston Marathon, Vander Leest was just weeks away from running her second marathon in Grand Rapids in October 2017. There, she ran an even faster Boston qualifying time of 3:27:16.

As winter rolled around, Vander Leest began her training for the Boston Marathon.

“Boston was my third marathon, but it was the first that I had to train for over the winter, which was a whole new ballgame and definitely a test to my dedication, especially on those frigid, Iowa winter days,” Vander Leest said. “However, I’d say training in not-ideal weather conditions all winter was great preparation for when the extremely wet, cold, and windy race day rolled around.”

When Monday, Apr. 16, dawned, Vander Leest was more concerned about getting to the right place at the right time for the start than she was about the rain forecasted for the day.

“I had been thinking about this race for so long that I was super ready to get across the starting line and finally press go on my running watch,” she said.

Thankfully, Vander Leest made it to the start line in time and was finally able to begin her run toward a dream come true. Right away, the crowded running conditions stuck out to her and were something that took a bit of getting used to.

“Compared to Grand Rapids, (at Boston) I felt like I was always very close to other runners, constantly weaving in, out, and around my competitors, trying not to break my stride,” she said. “I had just crossed the halfway point when someone actually ran into the back of me, causing me to fall flat out on the ground and into a puddle. I only ended up with skinned knees and was already soaked to the bone anyway, so thankfully it didn’t faze me much and was able to get right back up and into the race!”

Despite the fall and not being able to run freely like she had trained on rural Iowa highways, Vander Leest said she really enjoyed running the race with so many others and it helped the marathon go by quicker, even though she didn’t run her fastest marathon time.

Though she didn’t reach her goal of setting a new personal best marathon time, that wasn’t her real focus in running the race. 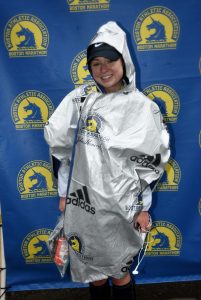 Minutes after crossing the finish line, Vander Leest tries to warm up.

“I played it a little safe the first half of the race, not being familiar with the course and not knowing exactly how the weather would affect my body this time,” Vander Leest said. “However, I felt really strong and fresh the second half of the race, so I probably should have pushed it a bit harder early on. Although I didn’t beat my personal record, the time I ran at Boston ended up being another Boston Marathon qualifying time, and it was the time of my life regardless, so I definitely couldn’t have asked for more.”

On top of being a long-time dream fulfilled, the Boston Marathon gave Vander Leest a whole new love and appreciation for the running community.

“Pre-race pep talks and advice from strangers, talking race goals and making new friends from around the world in my starting corral, and numerous people using some of their energy to say ‘you go girl’ as I got back up after my fall, it really made me feel like I was part of something bigger and more important than myself,” she said.

Though she just finished one marathon, Vander Leest is already looking ahead to her next. She’s considering doing a marathon this fall, perhaps in Des Moines, just to “stay fresh.” Because with her qualifying time of 3:27:16 from Grand Rapids last year, Alexa has set her sights on the next Boston Marathon. It’s a sign that the rain, cold, wind, and accidental tripping at the 2018 Boston Marathon can’t overpower her love for running and the fun of experiencing such a prestigious race.

“I’m incredibly grateful to have had the unique opportunity to run in Boston,” she said. “The all-around experience surpassed my expectations and is something I will always cherish.”