What does it take to build a state championship team? Dedication, diligence, hard work, faith, and support from many, many people. Just ask Emory Stewart, the coach who led Lynnville-Sully to its first and only state football title 30 years ago this week.

In reflecting back on the 1986 season, Stewart remembers the first time he learned of the Class of 1986’s desire for a state title.

When the seniors on the ‘86 team were sophomores, they traveled to the UNI-Dome as a team to watch the state championship games.

“I will never forget the conversation I had at the end of the day in the Dome with the underclassmen,” Stewart said. “We were sitting together, and all of a sudden, they surrounded me and said, ‘Someday, Coach, we will be playing up here!’”

It was a lofty goal for the athletes from a school that had never won a football state championship. But the boys were adamant it would happen. Stewart explained to them a state title wouldn’t happen without things like dedication and hard work. Getting in the weight room, going out for track, improving their speed – the list of things they would need to do was long. Stewart also told them the difference between champions and those who never become champions is a very small window, but champions are willing to go the extra mile.

The sophomores said they were up for the challenge. This wasn’t the first time a state championship had been on their minds. Troy Vander Leest, an offensive guard and linebacker, was one of those sophomores. He recalled how one of their junior high coaches had planted a seed in their brains about earning a state title. 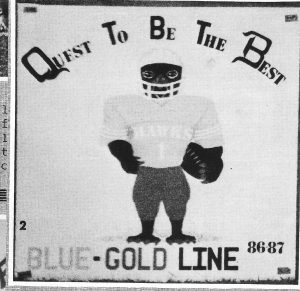 “Someone said, ‘If you guys really work hard and stick together, you guys might be able to win a state championship someday,’” Vander Leest said. “That kind of got us believing that it was possible.”

And so the quest began.

In their junior-year season, the Hawks went 9-1, missing the ultimate goal with a second-round playoff loss to Preston. But they were not deterred. In fact, it made them even hungrier for the title.

To start out the 1986 season, as usual, the Hawks had a team meeting to establish goals and pick a motto – “Quest to be the Best.” The team members said they wanted to be conference champions, go undefeated, and win the state title. They had high expectations, and so did others, according to Coach Stewart.

“We were rated No. 1 in the first preseason poll, and I felt they were great goals but could also put more pressure upon the guys to be that perfect,” he said. “So I encouraged them to establish a goal as simple as ‘Win our next game.’”

That simple goal took the pressure off the players because if they stumbled along the way, they could still focus on winning their next game.

“The pressure was off, and we set out to have some fun,” Stewart said.

The Hawks worked their way to a conference championship and had an 8-0 regular season with five shutouts. Most of the victories were blowouts, but a couple were only won by two touchdowns.

For Joel Jansen, another senior that year who played tight end and defensive end, the close regular-season game with Eddyville is the game that sticks out the most in his memory (aside from the championship game, of course). Eddyville struck first in the game.

“That was essentially the first and only time we were behind all year,” Jansen said. The cool thing, though, was how the team didn’t panic. “We didn’t let it bother us,” he said. “We just played even harder.”

L-S pulled off the tight 21-7 win and picked up a win the next week to close out the regular season.

In postseason play, the Hawks beat LDF in the first round of playoffs and were pitted against Preston in the quarterfinals for the second straight year. Vander Leest recalled the feeling of “sweet revenge” when they beat Preston 39-6.

Next was the semifinals game against Wayne of Corydon. This is the game that sticks out in Vander Leest’s memory. It was held on a Saturday afternoon so was played in the daylight. Wayne’s players brought a busload of black balloons to Sully to release beforehand. The Hawks weren’t intimi-dated and won handily, 27-0, in front of a huge crowd packed in all around the field. Vander Leest said he’d never seen so many fans there.

It was the perfect momentum builder heading into the final game of the season.

The state championship game ended up being a defensive battle with L-S edging out Britt 12-7 for the state title. The game was kind of a blur for Vander Leest. “We were glad that there were only four quarters in football because we were so shot and so tired by the end of that game that it was all we could do to hold on to win that game,” he recalled.

The “Quest to be the Best” was complete.

Coach Stewart remembered coming back to Sully after winning the title. They were greeted with a sign on top of the Sully Co-op that read “L-S Hawks #1.” The next morning, the team loaded buses to head to the Metrodome in Minneapolis to watch the Giants and Vikings play. “What a celebration it was,” Stewart said. “When I got on the bus with the parents and the team, there was a sea of ‘Des Moines Register’ [newspapers], and everyone was reliving our victory from the night before.”

When Stewart looks back at the 1986 season, he said the best memories were the relationships built and the spiritual road the team traveled. He shared one final memory from the 1986 season. Right after they had won the state title, he was surrounded by a dozen reporters. One of them asked why the Hawks were holding up two fingers while holding the trophy. Did it stand for victory? Tearing up, Stewart said, “Well, sir, you might not understand this, but to our players that means we are number two and God is number one, and there is nothing that man can put ahead of God that is more meaningful than His love for us.”

It was an awesome moment for the coach. “My heart was filled, and the state title then had true meaning,” he said. “How many young men would have done that at that moment in their lives?”

Thirty years have passed since that state championship game. The young men are grown, some with children of their own playing high school football.

Coach Stewart lived out his faith and was looked up to by Jansen and the team. He was “the greatest,” Jansen said. “Every Friday night we went to Coach’s house for pizza after the game and watched game film and reviewed stats.”

He also noted that the team had “unbelievable team unity,” thanks to their shared dream carried through from junior high all the way to their senior year.

As for Vander Leest, he has an almost daily reminder of the 1986 season due to a sign hanging in his garage that his wife bought for him at an auction a while back. It reads, “Welcome to Sully: Home of the Lynnville-Sully Hawks 1986 State Football Champions.” It’s a fun reminder of a special time in life for Vander Leest and others.

“It’s one of those highlights of my life – winning a state championship when you got the whole community behind you and everybody rooting for you. And you got your best friends, all your buddies, that you’ve been working with since seventh grade,” he said. “You come out your senior year with a state championship. You couldn’t end much sweeter than that.”

On Friday nights this fall, Vander Leest could be found at the L-S football field. His role has changed from player to fan as he follows his son Gage, who was a sophomore on the Hawk football team. The L-S boys’ exciting 2016 season definitely brought back some memories for Vander Leest. He hopes the story of the 1986 championship team encourages his son and others to not limit their dreams.

“We had 36-37 guys on our team that were just regular guys from Sully, Iowa, and we won a state championship,” he said, adding, “Just believing you can do it is one of the first steps in making it happen.”