Bertine Slegh, 91, of Prairie City, passed away Thurs-day, June 25, 2020, at her home. Private family graveside services were at Waveland Cemetery. Memorials may be directed to the Prairie City United Methodist Church or the Jasper County Salvation Army.

The daughter of George D. and Gladys M. (Cordray) Lewis, Bertine was born Dec. 30, 1928, in Colfax. She graduated from Colfax High School. On Sept. 8, 1948, she was united in marriage to Robert M. Slegh at the Lutheran Church in Newton. Bertine worked as a farm wife and at Pella Corp for 15 years, retiring in 1991. She was a member of the Prairie City United Methodist Church.

Those left to honor her memory include her son, Jerry (Nancy) Slegh; three grandchildren, Kristi (Jamie) Webb and their children, Beau, Easton, and Camden; Nicole (Major Alexander, USMC, Ret.) Pudol and their children, KyraNicole, Wilhelmina, and Alexander II; and Kelly (Nate) Mosher and their children, Jaxton, Scarlett, and Charlee. Also surviving are two sisters, Helen Holdefer and Linda Wilson, and many nieces and nephews. 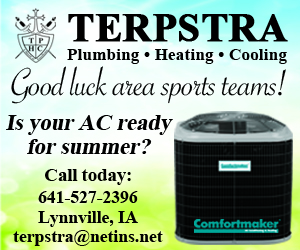