Most of the summer of 1928, her mother Alice (Baarda) Vonk sat in front of a block of ice, placed in a metal washtub with a fan blowing over it, keeping cool during her pregnancy. No air conditioning in those days, and it was a hot summer. On the very last day of 1928, Dec. 31, she gave birth to her first child, Berneda. Proud father was Case Vonk.

Berneda was the oldest of their eight children. Bea, as she preferred to be known, graduated the eighth grade, and then stayed home to help with her seven brothers and sisters. May 6, 1949, she married Robert Duane “Ozzie” Oswalt, having met at the Sully roller skating rink. They had two children, Steven and Linda.

Bea worked at the Sully Creamery with Duane for the first couple of years, but quickly became a full-time homemaker and homeworker. Every day had its own, pre-planned cleaning or homemaker project, or two. She kept a spotless -- and uncluttered -- home. That pride extended to her yard and vegetable and flower gardens. She loved pulling weeds. She was even known for pulling weeds out of various downtown sidewalks when she ran across them. She often enlisted the help of her grandchildren for yard and garden projects.

By far, the greatest love of her life was her family. If they gave out gold medals for mothering, and grandmothering, she likely would have won several. Her door was always open to her grandchildren and their friends. There was a special refrigerator downstairs just for soda pop and drinks for everyone, and it was well-stocked and opened often.

She was a great cook, although her recipes can be hard to duplicate because of her unique “dump and pour” measuring system, a “glob of butter” was a common ingredient. Meals were never complete without a “Big Glass of COLD Milk,” a lesson strongly impressed on her grandkids. A specialty was homemade pies, made with lard that she rendered herself. She passed down this skill to her daughter and granddaughters. Each year, she would take her grandchildren with her to Tama, to hand-pick strawberries and spend the day making jam with them. The jam would be frozen and enjoyed the rest of the year. Nothing tasted quite like it.

There was always time to play games at her house. Scrabble, Rack-O, and jigsaw puzzles were favorites. In her later years, she loved doing crossword puzzles and could be found sitting on the living room floor and doing them all day long. She did so many, she bought puzzle books by the case. With the loving help of her son, she was able to continue living at home until a fall three weeks ago.

Bea was a strong moral example to her entire family, she would never tell a lie, hold a grudge, or be angry with anyone.

She is survived by her son Steven of Sully, and his children Ryan and Becca Oswalt, Ryland, Lilly, and Eva of Grimes, and Ashley and Carlos Zuniga-Paxtian and their children, Clayton, Ryk, Thayer, Noelia, and another on the way, of Bondurant; daughter Linda and Barry Beyer of Sully, and their children Nick and Kate Beyer of Searsboro and Kelsey Beyer and her cats Sprite and Reggie of Tempe, AZ; her sister Jeane Montray Morris of Tulsa, OK; and her brother Ron Vonk of Ft Worth, TX.

She was preceded in death by her parents, her husband Robert Duane Oswalt, her sisters Joy Verwers, June Fife, and Elaine Doubleday, her brothers Bud Vonk and Cleo Vonk, and two great-grandchildren in infancy Oliver and Rowan Oswalt. 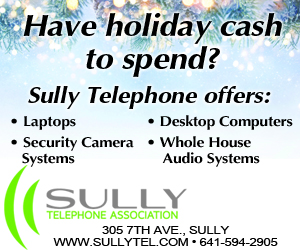