Arlene Bernice Goemaat was born on New Year's Day, Jan. 1, 1937, south of Pella. Her mother Johanna (Vander Wiel) passed away when Arlene was five years old, and her father Bastian Goemaat passed away when she was 14. She and her younger sister Shirley were raised by their aunt and uncle, Sarah and Klaus Van Buren, in Pella. Arlene graduated from Pella Christian High School in 1954, where she was involved in music and drama. She received a scholarship to attend Calvin College in Grand Rapids, MI, where she earned her teaching degree. She went on to teach third grade at Roseland Christian School in Chicago, IL, as well as at Jenison Christian School in Jenison, MI.

Arlene met Richard (Dick) Vander Laan at Calvin College. They were united in marriage on Aug. 14, 1957, at First Christian Reformed Church in Pella. Their first child, Lori Ann, was born in 1958 in Grand Rapids, MI. They moved to Pella in 1959 where Dick began teaching at Pella Christian High School. Their son, Mark Richard, was born in 1964, and in 1970, their second daughter, Lisa Joy, was born. Dick continued teaching and coaching at Pella Christian High School and in 1976 began working in human resources at Vermeer Manufacturing Company.  While the children were in school, Arlene sold Avon Products for more than 30 years. She also taught as a substitute and as a reading aide.

Already in eighth grade, Arlene began playing the organ. She played for four years at First Christian Reformed Church and 40 years at Calvary Christian Reformed Church in Pella. She was also involved in Bible study, Mission Circle, and choir. She and Dick traveled extensively on yearly family vacations in the United States while their children were still at home. After retirement, they traveled to many countries: Kenya, Zambia, Mozambique and Malawi in Africa, China, Hong Kong, Italy, Greece, Turkey, Egypt, Syria, Israel, Malta, and the European countries of The Netherlands, Austria, Germany, France, Spain, and Liechtenstein. They also traveled to islands in the Caribbean, as well as Hawaii. Besides traveling, Arlene loved to be with her children, 10 grandchildren, and 10 great-grandchildren. She especially enjoyed family gatherings and playing board games. She was a caring person and often had a “funny quip” to lighten any situation.

In 2014, Arlene suffered a stroke which required her to move to Jefferson Place in Pella. She enjoyed the people and activities there until her move to The Cottages in Pella. Arlene passed away shortly after her transfer to the Hospice of Pella Comfort House on Aug. 4, 2020, at the age of 83 years.

She is survived by her faithful husband, Dick Vander Laan, and was a loving mother to their three children and their families: Lori (Dr. Galyn) Vande Zande of Pella, Mark (Darlene) Vander Laan of Bentley, Alberta, Canada, Lisa (Mike) Van Sant of Sully; 10 grandchildren; 10 great-grandchildren; her sister, Shirley Kelderman of Knoxville; and a brother-in-law and sister-in-law, Rev. Jack and Millie Vander Laan of Port St. Lucie, FL. 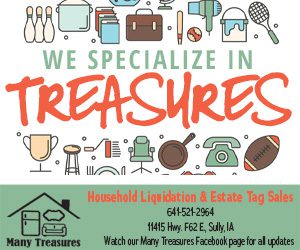