For the past 27 years, Deputy Brad Van Zante’s patrol car has sat in his yard whenever he was off duty. Now, there’s just a big open spot and a bare path where he used to park.

Van Zante retired last week after 27 years of protecting and serving the people of Jasper County and 35 total years in law enforcement.

Van Zante turned in his patrol car, uniform, and guns on Friday, Apr. 23. When midnight struck that night, his commission was officially over, and “now I’m a citizen like everyone else,” he said.

A 1982 graduate of Lynnville-Sully, Van Zante has lived in the L-S area for most of his life. His parents were LaVerne and Ruby Van Zante. (LaVerne passed away in 1976, and Ruby married Ralph J. Van Wyk in 1978, and passed away in 2020.)

Van Zante currently lives in rural Lynnville where he grew up on his family’s century farm bought by his great-grandpa in 1902. It was actually on that farm that Van Zante showed the first signs he wouldn’t be following in the footsteps of his farming family members.

“I was groomed to be a farmer like Dad, Grandpa, and Great-grandpa,” he said. “But I had no interest in farming. I could have told you that at five years old.”

Despite having plenty of tractors to play with, Van Zante always gravitated toward fire trucks and police cars.

Then, toward the end of his high school years while on a trip in the mountains, Van Zante saw a patrol car pull someone over. He remembers thinking that looked like an interesting job. 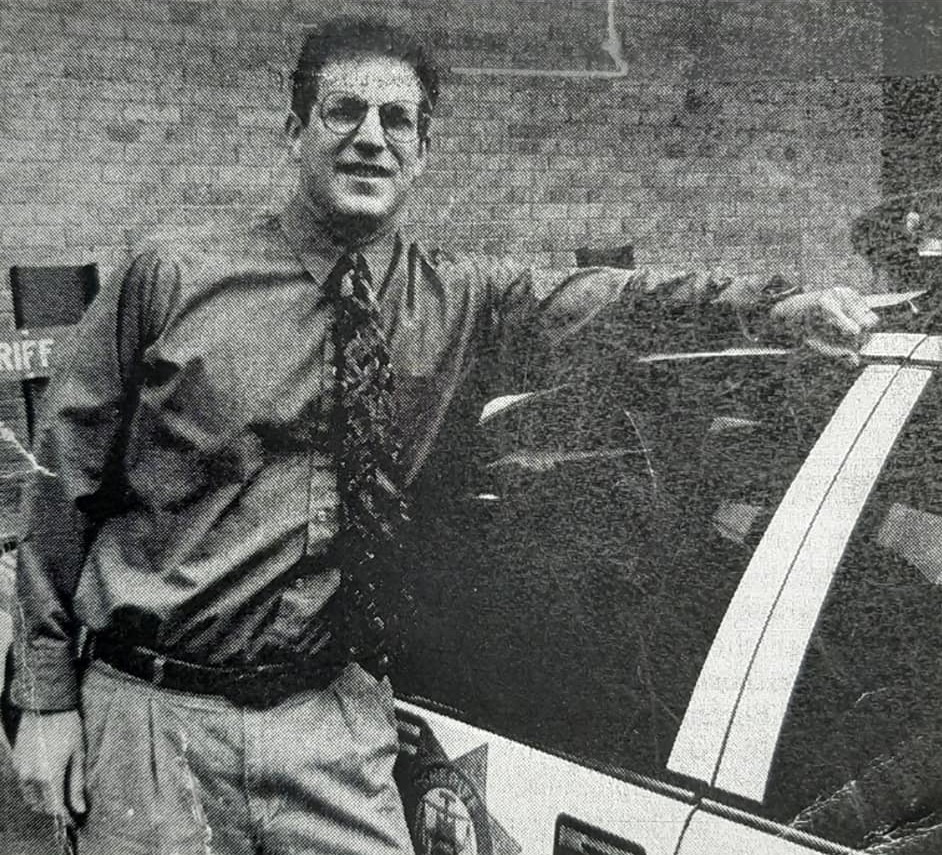 Van Zante when he arrived on the force.

After high school, Van Zante headed off to college at Northeast Missouri State University (now Truman State University) in Kirksville, MO. He had to declare a major by his sophomore year and since his college had a criminal justice program, he decided to give it a try.

“It just sounded like an interesting career, and now, 35 years later, I guess I picked the right career,” Van Zante said.

He began his career as a public servant working as a police officer in Kansas City for a couple of years and then as an officer back in Kirksville, where he finished his degree in 1988.

Van Zante moved back to the family farm in 1993 and was hired by the Jasper County Sheriff’s Office in 1994.

He spent the first 20 years of his job as a road deputy where he “enjoyed life on the road.” The last seven years, he was assigned to the Jasper County Courthouse, where he served as bailiff and did general security. “It was a pretty good fit for me to kind of finish out my career,” he said.

Van Zante also served for 10 years as a D.A.R.E. officer, giving students at Lynnville-Sully, PCM, Baxter, and Sully Christian the tools needed to say no to drugs.

He’s pleased that a handful of students he had in D.A.R.E. at Lynnville-Sully went on to work in law enforcement.

“You never know how much impact you had on their decisions,” Van Zante said, “but it’s always neat to see somebody you know you had in D.A.R.E. class become some type of law enforcement officer when they graduate.”

Through all the years, no matter what the situation, Van Zante said whenever he had contact with the public, he has always tried to “treat people right and professionally.”

The biggest change Van Zante saw in over three decades as a law enforcement officer was in the technology. When he first started at the Jasper County Sheriff’s Office, each deputy had a radio and a walkie talkie. There were two bag cell phones the officers shared, but they had to be checked out first.

“You could never get a signal. You had to get on top of a hill somewhere close to Newton. And you were only allowed so many minutes, and if you went over, you were in so much trouble,” Van Zante recalled with a chuckle.

“It’s just amazing the technology that we all have now,” he continued. Today, the officers each have computers in their cars so they can run license plates and drivers’ licenses and instant message dispatch and other deputies. They also have body cameras, car cameras, and GPS devices.

Though the technological advances have been incredible, at its core, the job and the parts that drew Van Zante to it in the first place have stayed the same.

“I always found the job interesting in that when I went on duty, you never knew what you were going to see that day,” he said. A slower day could quickly turn exciting for situations like bank robberies, high-speed chases, and accidents. Van Zante always liked the unpredictability.

On the other hand, serving as a law enforcement officer had its hard parts as well. Van Zante has been on the scene of some terrible accidents. Also, “nobody calls the police because something good happened,” he said. “That does wear on you as the years go by.” 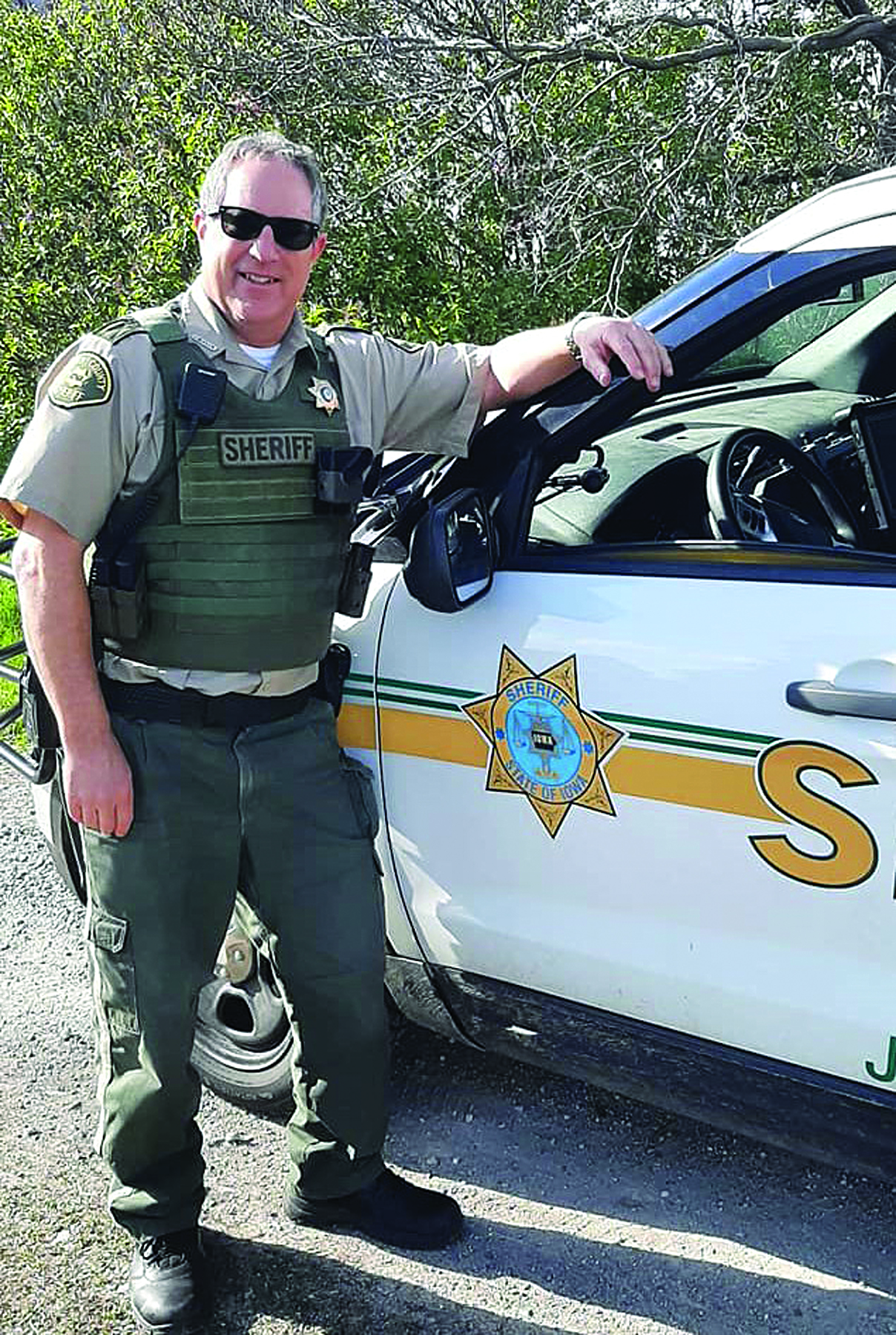 Brad Van Zantre of rural Lynnville closed the chapter on a 35-year career in law enforcement on Friday, Apr. 23. After serving the public for over three decades, Van Zante now looks forward to using his spare time to focus on hobbies such as gardening. He also hopes to make frequent trips to visit his girlfriend in Florida now that he is not working the long hours that accompany a career in law enforcement.

The job can definitely take a toll on marriages and families, too, because of the hours it requires, from working on Christmas to missing out on family activities when covering the evening shift.

Now that he has officially hung up his badge, Van Zante is looking forward to having time to do the things he put off over the years, like expanding his garden, canning, and taking better care of the farm and yard. He also has boxes and boxes of photos and other items to sort through from his mom, who passed away in October.

Van Zante has three adult sons, one of whom followed in his footsteps and is a deputy in Warren County. Van Zante also has two young grandsons and a girlfriend of 11 years, Steph, who is a college registrar in Florida. In retirement, he hopes to visit her in Florida more.

As the weeks go on, the bare spot in Van Zante’s yard where his patrol car used to sit will undoubtedly fill in. And he’ll find his schedule filling in with other things, too.

“I’ll look for a part-time job when I get bored,” Van Zante said, “but if you looked at my list, it’s going to be a long time before I’m going to be bored.”

Thank you, Deputy Van Zante, for your dedication and service to the people of Jasper County. Enjoy your retirement!