Marlo and Ruthie Jansen provide a home away from home full of fun adventures for foreign exchange students through the EF Exchange Program. Here they are seen with their foreign exchange students from the 2021-22 school year - Elin Leuthi from Switzerland, center, and Greta Wallen from Sweden, far right. The Jansens' grandsons Royce and Ryder Jansen got in on the mudding fun on this adventure, as did Hannes from the Netherlands, who is pictured in front of Marlo. Hannes stayed with the Jansens in 2017-18, and most recently returned this spring to reconnect with his Iowa family for two weeks.

The feelings associated with empty nest syndrome have never been a reality for Marlo and Ruthie Jansen of Sully. Since 2013, the couple has opened up their home and hearts and hosted foreign exchange students through the EF Exchange Program. Over the past decade, 10 foreign exchange students have called the Jansens’ acreage, which sits on the eastern outskirts of Sully, home away from home for a school year. Marlo and Ruthie not only provide shelter and the necessities, but they deeply connect with each student through an outpouring of love, guidance, and support.

Ruthie explains there are several reasons the couple has opened up their home to international students so many times over the years. First and foremost, opening up their home to teenagers from across the globe gives the Jansens the opportunity to share their family and church family. Another benefit expands the Jansens’ horizons as they too get the chance to learn their foreign exchange students’ country, customs, and culture.

The Jansen family’s first foreign exchange student, Hae, hailed from South Korea. She lived with Marlo and Ruth while the Jansens’ youngest of three children was still a high school student. In 2013, Marlo and Ruthie partnered with EF Exchange Program and welcomed Line from Denmark. 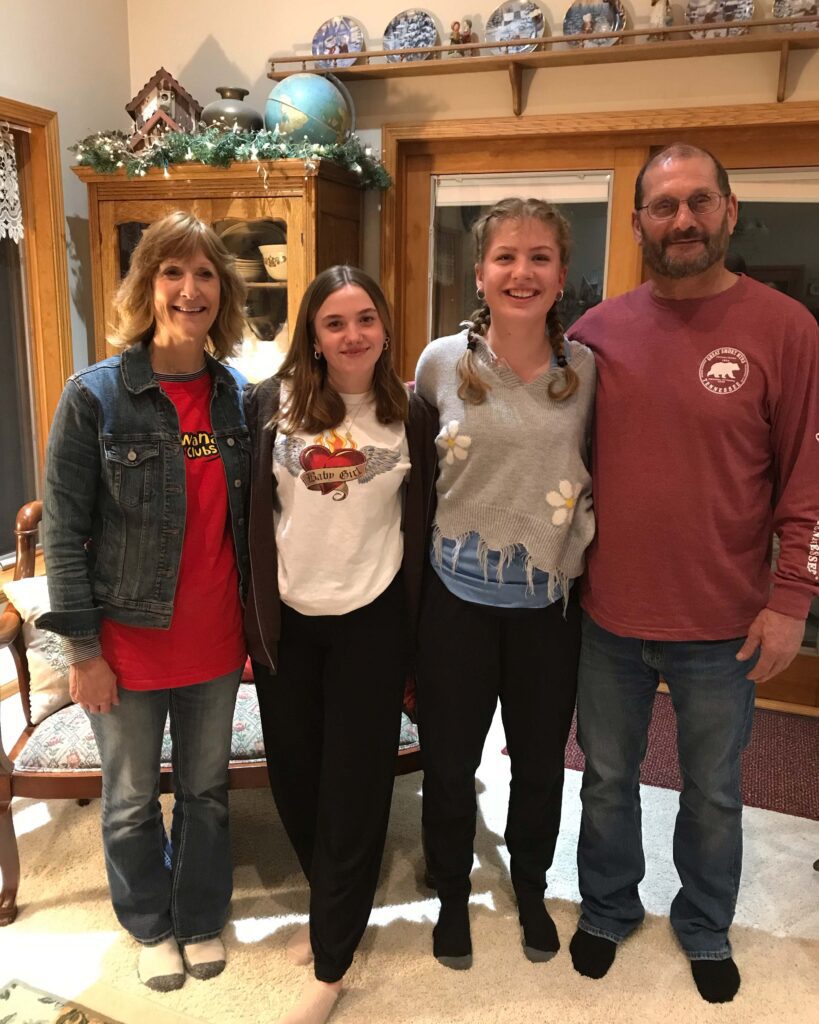 Ruthie and Marlo flank their 2021-22 foreign exchange students, Greta Wallen from Sweden and Elin Leuthi from Switzerland at Christmas.

They’ve remained associated with EF Exchange Program and have since hosted Amalie from Norway, Ida from Sweden, Nele from Germany, Hannes from the Netherlands, Berta from Spain, and Pietro from Italy. Every summer, they welcome a new foreign exchange student to Sully, the Jansens are all in in their commitment to providing a terrific school year for the newcomer. By the end of the approximate 10 months the student stays with Marlo and Ruthie, it’s not just the student who has grown and been blessed by the experience. The entire Jansen family – from Marlo and Ruthie to their 11 grandchildren – develop lasting relationships that carry on long after the last goodbye at the airport. “At our house, we do not say goodbye...it is see ya later!” said Ruthie.

“As host parents, our goal is to share our love of Iowa and the U.S. and encourage them to try activities in school that would not be a normal part of life,” explained Ruthie.

That kind of encouragement and support has served as a stepping stone for each foreign exchange student to embrace all of the opportunities that living in Iowa and being a student at Lynnville-Sully High School has to offer. The foreign exchange students staying with Marlo and Ruthie have participated in a variety of activities at Lynnville-Sully including sports, dance, speech, drama, and more. The Jansens not only encourage the involvement but always make a point of being in the stands cheering on their host children. Beyond school, the Jansens make it a priority to introduce the students to the beauty and adventures of Iowa, and they also extend their fun experiences beyond Iowa’s borders.

In mid-June, the Jansens said  their most recent “see ya laters” to foreign exchange students Greta Wallen from Sweden and Elin Luethi from Switzerland. This year marked the couple’s second double placement in their time as host parents, meaning they welcomed two foreign exchange students into their home for the same school year. Both girls arrived last summer and spent the next 10-plus months making Sully and Iowa their home away from home.

Wallen, who lives 20 minutes away from Sweden’s capital in Stockholm, said moving from a city of 80,000 people to 800 was a culture shock. “I couldn’t be anonymous anymore, which is important to Swedes, who don’t even know their neighbors. Every time I went into town,” said Wallen of her time in Sully, “I would see somebody I knew. But, I loved it. I got such a sense of community, everybody is so nice. Now when I am back in Sweden, that is the thing I miss the most – the social, nice people. Americans are truly the most social people on the planet.”

Luethi came from a small town called Lutzelfluh, so Sully’s quaint community was not a big adaptation. She, too, “loved that you knew everyone. I thought that was really lovely,” said Luethi.

Both girls recognized stark differences from their homeland upon arrival in Iowa. Before arriving in Iowa, Wallen had never seen a truck or cornfield. She found American apparel to be much more relaxed compared to Sweden, acknowledging that nobody would ever wear sweatpants to school unless it was the day after a big test. Food preferences certainly varied. Wallen put ketchup, a very common condiment in Sweden, on everything, including pasta. She was surprised to learn ketchup didn’t accompany every dish here. She said her biggest food-related culture shock occurred at Christmas when the Jansen family feasted on tacos. “Tacos. Me who takes Christmas very seriously with Christmas ham and meatballs and other Swedish things was shook to my core!” said Wallen.

Adjusting to American food was also a challenge for Luethi, who is a vegetarian. She said, “Iowa has a ton of meat!”

In addition to falling in love with the Jansen family and sense of community, Wallen and Luethi both quickly became fans of ZIP IN ice cream and even indulged in the sweet treat during Iowa snowstorms. “At the end, I didn’t even have to say my order. They warmed up the hot fudge as I entered the door.” said Wallen of the frequent customer status the duo earned at ZIP IN.

Iowa’s rolling hills, fields, and big open night sky made their mark on Wallen as she fell in love with the countryside’s simple beauty. “I love seeing the fields and hills,” said Wallen. “Iowa’s landscape is so pretty. And the stars at night – I live in too big of a city to see them. I loved just standing for awhile, looking up at the sky full of stars.”

When Wallen and Luethi packed up their bags in mid-June to head back home, they packed up so much more than their belongings and the new belongings they had acquired. The girls packed a lifetime of memories squeezed from 10-plus months of living and experiencing life with new friends and people whom they now call family. Favorite memories include the Hairball concert the girls attended with Marlo and Ruthie at the Iowa State Fair. Wallen lists car rides to Knoxville, Sam’s Club shopping adventures, and evening and lunch talks as some of the simple things she misses the most about living with the Jansens. One of the best weekends of her life, according to Wallen, took place on the “famous snowmobile trip” with the Jansens. “Writing about it doesn’t give it justice. Please ask Marlo how it was, and ask if anyone ever tipped the snowmobile.”

Luethi agrees the Wyoming snowmobiling is a top memory, as is a trip taken to the Mall of America. She will also miss L-S football games under the Friday night lights and the open mindsets of the people she encountered.

That kind of bond is something Marlo and Ruthie have developed with all of their foreign exchange students over the years. The relationships don’t end once the students board a plane for their home countries. Just this spring, the Jansens welcomed back Hannes from the Netherlands who stayed with them for the third time, this trip being a two-week stay. The Jansens have also made trips across the pond to visit the students they once hosted and gained first-hand experiences of the countries and cultures they had previously only heard about during living room conversations.

Both Wallen and Luethi’s time in the states wrapped up in New York for a workshop that included exchange students from all over the world. “Our organization told us the happiest exchange students come from the Midwest, which I 100% believe,” said Wallen. “I do not regret for a second saying yes to my placement in Iowa.”

Ruthie is just as appreciative of Wallen and Luethi as the girls are of the Jansen family. “Both girls had a wonderful year and concluded with saying goodbye to many friends with hugs and tears,” said Ruthie.

Back in their home countries, Wallen will focus on completing her senior year since the time studying in Iowa did not count towards her degree. She hopes to become a psychologist or screenwriter. Luethi plans to start training as a nurse.

Although they do not know when or from where their next foreign exchange student will come, Marlo and Ruthie will be ready to roll out the welcome mat with a warm hug, hello, and anticipation for new adventures when the time comes.