Smoke On The Water raises $25,000 for local man battling cancer

The energy was as high as the smoke billowing from pitmasters’ tents at the Seventh Annual Smoke On The Water BBQ competition and community fundraiser held Saturday, Aug. 29, at Old Settlers Park in Lynnville.

The event delivered on its slogan of “Good People, Good Food, Good Cause” once again. Although there were several changes and precautions taken this year due to COVID-19, Smoke On The Water president Jeff Arment said the 18 teams of competitors stepped up their BBQ game and the community showed their appreciation and support for this year’s beneficiary, Tom Sheets of New Sharon. A $25,000 grand total was donated to Sheets for his medical expenses.

Starting on Friday, competitors rolled into Old Settlers Park to set up camp with their secret recipes, BBQ rubs, and sauces in tow. Following a team meeting and the distribution of meat, teams went right to work trimming and injecting the meat. The bags tournament typically held on Friday night was canceled due to COVID-19, but DJ Dave Crawford kept the atmosphere lively with music throughout the evening.

On Saturday – “game day” for the competitors – teams wrapped up hours of prep, grilling, and smoking in time for the 2 p.m. competition deadline. A panel of 20 hungry judges from all across Iowa sampled each of the four categories of meat – chicken, pork ribs, pork butt, and brisket, as well as the sidewinder category, beef tongue. The public sampling started at 4 p.m., and a long line of attendees wrapped around the grounds of Old Setts. In addition to those in attendance, the team members competing served up food in to-go containers for those who chose the drive-up option, a new feature this year due to COVID-19. Arment reports that as in years past, the delicious BBQ ran out within the first hour due to overwhelming demand.

Awards were distributed outside the pavilion at 6 p.m. Smoke On The Water’s Grand Champion honors went to Prince Stoecker of Ottumwa. Locals Mark Van Wyk, Tony Van Wyk, and Cale Foster, who make up the team Fire-N-Res-Que, earned Reserve Grand Champion honors. A list of winners of the categories can be found on this page. Following the awards was the drawing of the 50/50 raffle drawing and the live auction.

“We had the largest auction we have ever had with some amazing items donated,” said Arment. Some of the items garnering high bids included a  Pella Security safe, two whole hogs, and quilts. The donated items for the auction came from residents and businesses in the local area and surrounding communities. 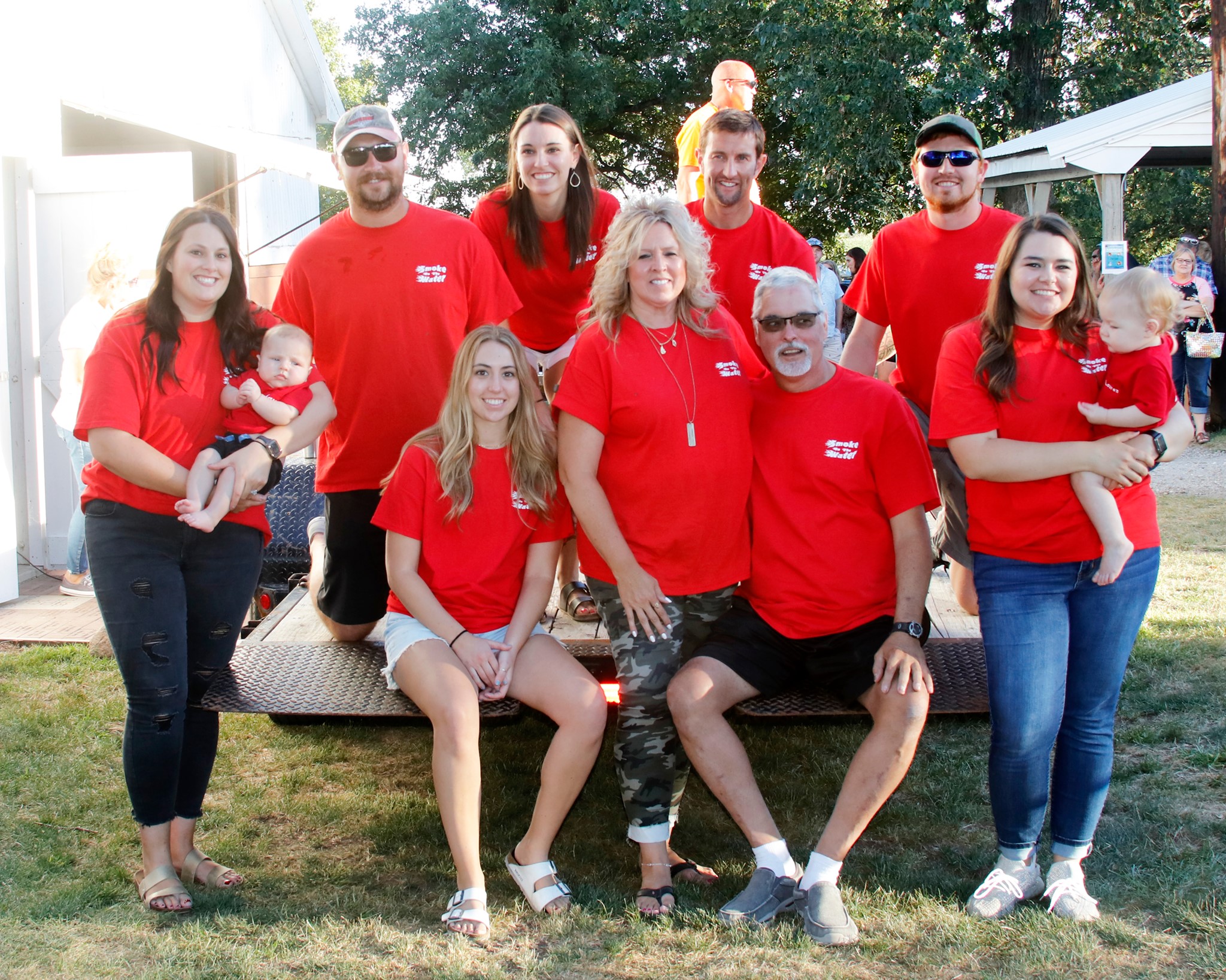 Although not all events were held this year, and a smaller crowd was in attendance due to COVID-19, the event was wildly successful and raised $25,000 for this year’s beneficiary, Sheets. Sheets, of New Sharon, was in remission after surgery and chemotherapy for stage 4 colon cancer. In November 2019, a checkup showed cancer had returned more aggressively in his liver and adrenal glands. The money raised at this year’s Smoke On The Water will help Sheets and his wife Mary Jo with medical expenses. The couple has four children and two grandchildren. Sheets currently works at Terpstra Plumbing, Heating, Cooling after retiring from a 28-year career in law enforcement. In addition to the big $10,000 check presented on Saturday, Sheets was given a final check at Monday’s post-event meeting that included all proceeds from the auction as well as the donated cash prizes from several of the winning teams.

Arment gives thanks to the many donors, volunteers, teams, and community members in attendance who made 2020’s event possible. Along with Arment and his wife Jodi, a team of board members plans the event each year. Board members are Adam Carlson, Darci Jansen, Kristy Van Wyk, Lynn Dunsbergen, Allen Newell, Jill Crawford, and Crystal Montgomery. Arment gives thanks to Amanda Van Zante who sang “The National Anthem” to kick off Saturday’s events, the Jolly Workers 4-H Club for their help with the baked goods sale, and auctioneer Rylan James who volunteered his time for the largest auction in the event’s history.

“Wow! What can we say? We had a great turnout this weekend to help out a great man Tom Sheets!” said Arment.

Plans are already underway for 2021’s Smoke On The Water, which organizers hope will feature the return of the KidsQ, sides competition, punch board, and live music – all special features of Smoke On The Water which were eliminated this year due COVID-19.