Smoke on the Water raises $18,000 for Arthur family

In a time where local and world news is overwhelmed with devastating and heartbreaking events, the news coming out of Lynnville on Aug. 28 serves as a reminder of all of the good that still exists and the generous nature of our tight-knit community.

The eighth annual Smoke on the Water event held Aug. 27-28 at Old Settlers in Lynnville was a breath of fresh air for those whose minds and hearts were heavy. For two days, 17 teams of competitors and over 450 people who love BBQ and love to support a good cause convened in Lynnville.  At the end of the event, Lynnville’s Boyd Arthur and his wife Kathy were presented a check for $18,000 to assist with Boyd’s medical bills. The event certainly lived up to its tagline of “Good People, Good Food, Good Cause.”

The teams rolled into Lynnville as early as 10 a.m. on Friday to set up camp. That evening, the meat was distributed, and competitors were challenged to put their best rubs, recipes, sauces, and methods to the test in four meat categories (chicken, pork ribs, pork butt, and brisket) as well as  the sidewinder category (lamb chops).

On Saturday, over 450 people gathered at Old Settlers to taste the award-winning BBQ, enjoy the entertainment, and support the Arthur family. Saturday’s events kicked off with the National Anthem performed by Amanda Van Zante of rural Sully. Long before Saturday’s noon kick-off, though, the 17 teams of competitors had been putting in long hours of meat prep and monitoring the progress prior to the turn-in deadline. Eighteen judges had the tough but tasty task of judging the four meat and sidewinder categories. Awards were announced at 5 p.m. followed by a live auction, presentation of the large check to the Arthur family, and evening entertainment. This year’s grand champion honors went to Smokin’ Suckers of Oskaloosa. They nearly cleaned house, getting first place in the chicken, ribs, and brisket categories, and third in the pork butt category. Last year’s overall champ, Prince Stoecker BBQ of Urbandale, was this year’s reserve grand champion. The only local team placing in the top three was Triple V in the chicken category. Triple V out of Lynnville consists of team members Dustin Van Wyk, Brady Van Maanen, and Aaron Van Wyk.  Assistance from the trio’s wives played an important role in their success.

“We had an awesome turnout for an awesome, deserving family!” said Crystal Montgomery, Smoke on the Water committee member.

Guests came hungry for delicious BBQ and left fully satisfied. In addition to the meat samples, many of the teams provided samples of side dishes. “We had plenty of food,” said Montgomery. There was also a drive-through option, which some guests took advantage of. A bluegrass band played all afternoon and was a real crowd pleaser. Later that evening, Tyler Richton of Deep River provided an amazing solo acoustic performance with his mix of old and new country music. Kenny Hartgers and other members of the Christian Motorcycle Association helped direct traffic and parking.

The real reason for the event was to help a local resident in need, and Smoke on the Water did so to the tune of $18,000. The money raised for the Arthur family came from competitors’ prize money, public sampling fees, Jolly Worker 4-H Club’s donation, auctioning off of donated items, Smoke on the Water merchandise sales, and more. 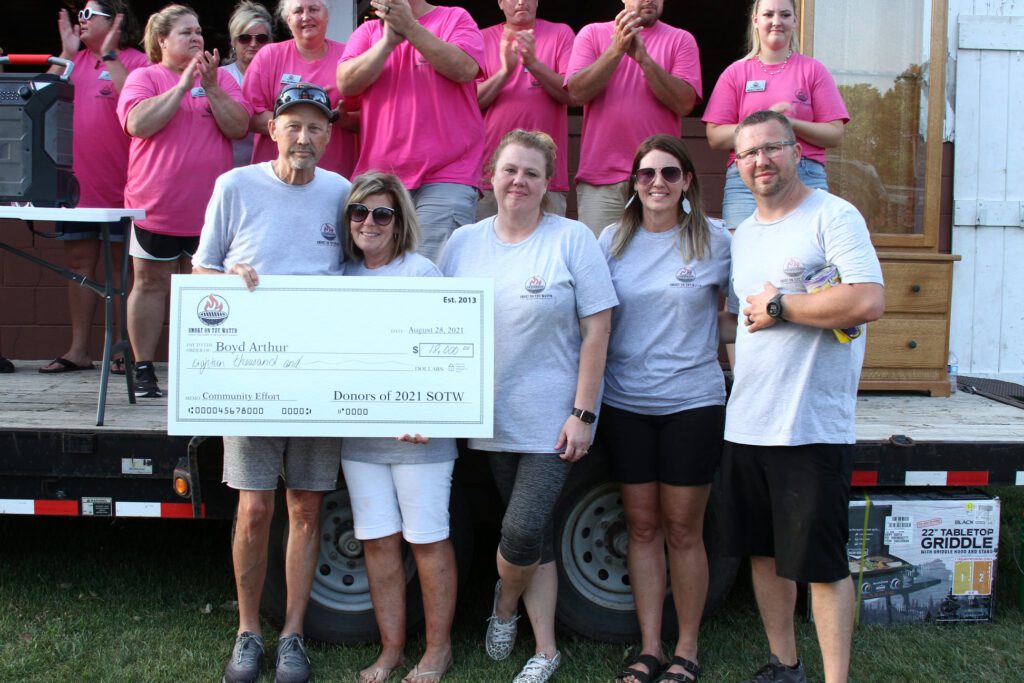 Boyd and Kathy Arthur are joined by their children, Tiffany Norman, Tasha Schnell, and Shannon Arthur for the $18,000 check presentation.

The live auction was a large contributor to the final donation tally thanks to generous people who gave items and those who bid on them, as well as the expertise of volunteer auctioneer Rylan James. A pie made by a 4-H member sold for $410. One generous bidder purchased a wooden gun case twice, donating it back two times to be auctioned over and over. On its third and final time on the auction block, the gun case sold for $400. In total, the gun case raised $1,400. Bruce and Lynn Dunsbergen won the raffle of a Green Mountain Grill. They then donated the grill to be auctioned off, which brought in over $700. A special donated item on the auction block was a picture from Doyle Harsselaar, Boyd’s brother-in-law. Tragically, Harsselaar passed away less than 24 hours before the Saturday event benefitting his brother-in-law and sister. “This is always an emotional event but with the passing of Doyle, it was even more emotional,” said Montgomery. “It was a bittersweet celebration.”

The Jolly Workers 4-H Club sold water, sno cones, and baked goods on Saturday and donated half of their proceeds to the Arthurs. The winner of the 50/50 raffle donated their winnings to the cause, as did many of the teams who won prize money for their placements in the BBQ competition.

The Arthurs were joined by their three children – Tasha Schnell, Tiffany Norman, and Shannon Arthur – for the big check presentation. Boyd addressed the crowd who showed up on his behalf and thanked them for their generous support. He reminded everyone in attendance to not take a day for granted as you never know when it could be your last. In March, Boyd underwent surgery for prostate cancer. Emergency surgery a week later discovered he had a perforated bowel. Boyd became septic and fought for his life for several weeks in the hospital, and he also spent time in a rehab center.

This year’s event pushes Smoke on the Water’s total donation to families enduring a medical hardship to nearly $110,000 in eight years. Committee members devote hours of time and effort over the entire year to plan the event, and their work does not go unnoticed. Jennifer Van Wyk, whose husband Dustin was a member the Triple V team, commented, “This committee did an awesome job! Lots of time and effort they put in to this does not go unnoticed. We had a great time being involved in this for a wonderful family!”

The Smoke on the Water committee will present the Arthur family with their official check at the Sept. 7 meeting, where they will also start preliminary planning for 2022’s event.