Serving U.S. Grant De Nooy -From Iowa to Iraq and back

A strong desire to give back was a big part of Grant De Nooy’s decision to serve his country through the military. That decision, made over nine years ago as a high school senior, is one he does not regret.

Through the Army National Guard, De Nooy has formed relationships with fellow Guard members, developed himself personally, and most recently, experienced life overseas on a deployment to Iraq.

CHOOSING THE GUARD
De Nooy, the son of Scotty and Brenda De Nooy, grew up in Sully and attended Sully Christian School through eighth grade. He went on to graduate from Pella Christian High School in 2012. But even before he donned his cap and gown, De Nooy had already made his commitment to the military, officially enlisting in the Iowa Army National Guard in January of his senior year. 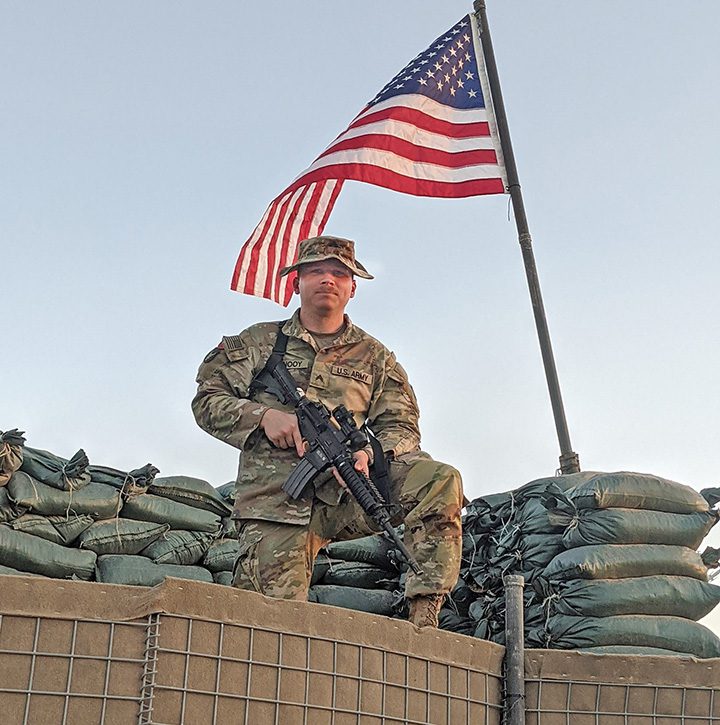 Grant De Nooy kneels under a flag he flew in Iraq on Memorial Day 2021 in memory of his grandpa, Harry Lanser, who served in the Iowa Army National Guard, retiring as a corporal.

“I was super thankful for my upbringing and great parents and great community. It felt like one solid way I could give back,” De Nooy said regarding his reasons for enlisting. He also noted having a “special admiration for service members” while growing up as well as being intrigued by the military lifestyle.

Initially, he thought about doing active-duty Marine Corps, but with some persuasion from his mom, he decided to join the Army National Guard so he could earn his college degree right away instead of waiting until after his time in the service.

TRAINING, COLLEGE, AND WORK
During his final semester of high school, De Nooy attended the Guard’s Recruit Sustainment Program, which introduced him to the fundamentals of the U.S. Army. The program was a one-weekend-a-month commitment, just like a regular National Guard schedule.

From there, he went on to Fort Sill, OK, for advanced individual training (AIT), which is essentially job training for the military. AIT lasted from October to December 2012. Completing the training gave De Nooy the title of 13D Automated Field Artillery Tactical Data Systems Analyst.

The title is a mouthful, De Nooy admitted. He explained how field artillery operates in three parts: The eyes who spot targets, the hands who fire the guns, and the brains of the artillery who calculate the shot. The latter part is what De Nooy’s training covered.

De Nooy returned home from AIT just after Christmas 2012. He wasn’t home long before he headed off to Dordt College (now Dordt University) in Sioux Center for the spring semester. For the next four years, he juggled both college and National Guard responsibilities. He continued to do his drilling in Fort Dodge as part of the 1st Battalion of the 194th Field Artillery Regiment.

In 2017, De Nooy graduated from Dordt, earning a bachelor’s degree in business administration with a marketing emphasis.

After college, De Nooy accepted a job at his current workplace, JARD, Inc., which is a trigger and firearms manufacturer in Sheldon. De Nooy is a shop foreman there and commutes to work from Orange City. 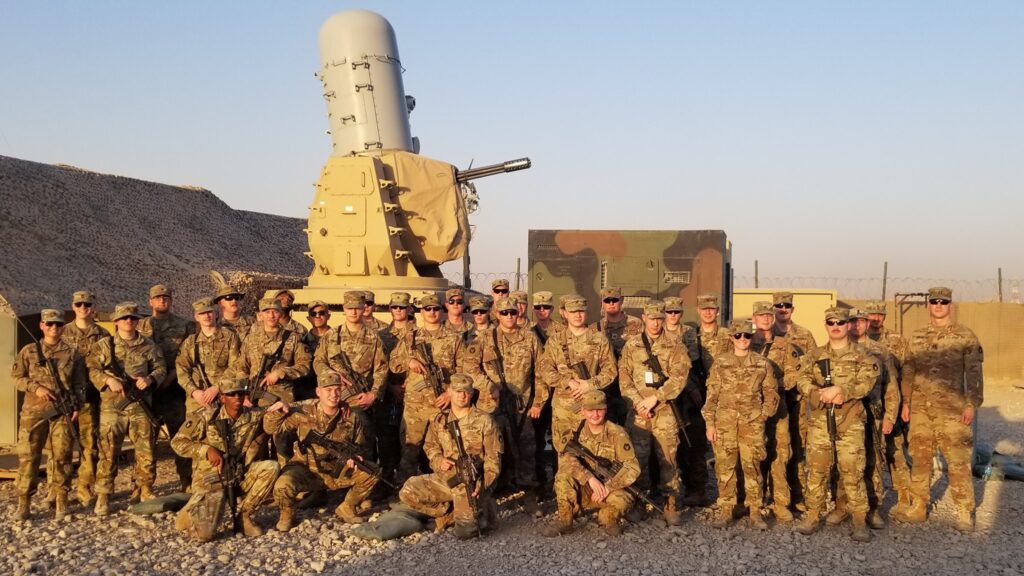 Pictured is De Nooy’s entire detachment that worked the C-RAM mission in Erbil, Iraq. They are posed in front of an LPWS (Land-based Phalanx Weapon System), the primary component of the C-RAM system. De Nooy is the third soldier from the left.

FROM IOWA TO IRAQ
In January 2020, De Nooy extended his contract with the Guard for one more year so he could be added to the deployment roster.

“I decided to get back in,” he explained, “because I had always wanted to go on a deployment just to sort of solidify my time in the service rather than it all just being training and preparation – to actually put some of what I’ve learned to good use.”
He started actively drilling again in September 2019, preparing for a deployment to Iraq from Aug. 1, 2020, through Aug. 1, 2021.

As it turns out, De Nooy didn’t use his 13D field artillery training in Iraq. Due to some short staffing, De Nooy instead learned how to operate a system called C-RAM (Counter Rocket, Artillery, and Mortar). The system shoots rounds very quickly at indirect fire, shooting it out of the sky to prevent it from landing on U.S. bases.

The first three months of deployment were spent back at Fort Sill, where De Nooy learned to operate the C-RAM weapon systems. Then, his battalion of about 300 soldiers headed overseas, where they were stationed at various locations across Iraq and parts of Afghanistan. De Nooy was part of a group of 36 soldiers deployed to Erbil Air Base in Erbil, Iraq.

Located in northern Iraq, Erbil is closer to mountains with a climate like Colorado. Erbil is in the Kurdistan Region, which includes parts of Iraq, Syria, Iran, and Turkey. The Kurds are considered a displaced people group, and overall, they are grateful for U.S. support that has helped them to gain more of a political voice. That made Erbil a much calmer area of Iraq for De Nooy and his detachment to be stationed.

Still, danger exists in that area as a sect of the terrorist organization Hezbollah seeks to push the U.S. out of Iraq. The terrorists are backed by Iran, so De Nooy said a lot of the rocket attacks received in Iraq were Iranian ordnance.

AIR ATTACKS
Though De Nooy felt “relatively safe” in Erbil, they did experience two attacks while he was deployed. The first was a rocket attack that largely missed the base. Of the 14 rockets launched, only one landed on post. Sadly, one government-contracted firefighter on base was killed.

The second attack was the first-ever, one-way drone attack launched by Hezbollah. A large explosives-laden, fixed-wing drone dove into a warehouse on base and blew up.
“It was only 300 meters from where I was laying in my bunk at the time,” De Nooy recalled. “So, it shook the whole tent and got us all up in a hurry because it (had gone) undetected. Fortunately, no one was injured.”

A typical day for De Nooy included an eight-hour shift where he monitored the airspace, watching for indirect fire and then later drones after the drone attack.

“Sort of our job description changed after that attack because that was something in military history no one had ever experienced before,” De Nooy said. 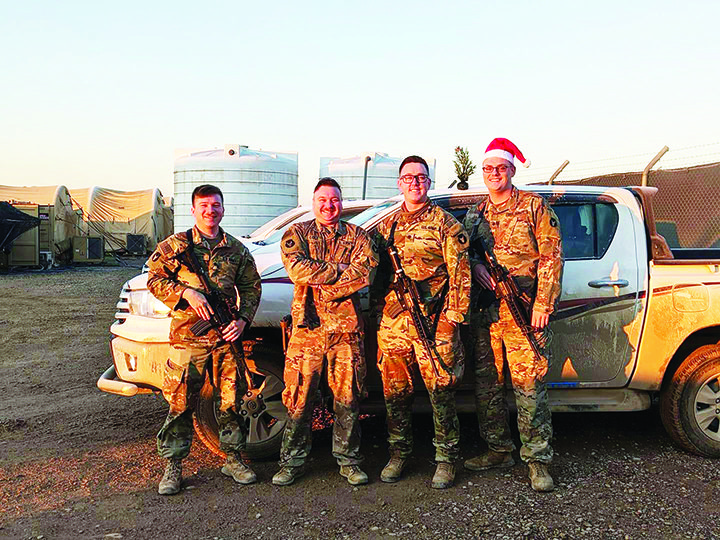 This is what Christmas Day 2020 looked like for De Nooy, who is pictured on the left with the three other men he worked with on his eight-hour shift.

Though no deployment is ever easy, De Nooy found multiple things to be grateful for while overseas. For example, modern technology made the long separation from his family a bit easier. Even out in the “middle of nowhere” in Iraq, they still had internet, so he was able to video call his family every week.

He also said his deployment was good for him as the structure of military life gave him the chance to further develop himself personally.

“Most of the changing or learning I experienced was getting back into reading, getting back on track for a regular exercise routine, as well as spending some time figuring out my direction – where I want to go and what I want to do,” he said.
Another highlight for him was receiving a promotion to sergeant while in Iraq, which transitioned him from the lower enlisted ranks to a non-commissioned officer (NCO) rank.

De Nooy returned home to U.S. soil in August, grateful to be reunited with family and friends. While in Iraq, he signed for two more years with the National Guard, pushing his contract end date to January 2023.

Due to his promotion to sergeant, De Nooy will transition from drilling in Fort Dodge to drilling at the Alpha Battery in Estherville. His first drill in Estherville will be in December.

“I’ll have a few people under me and one more person directly above me within our section of about a half dozen,” he explained. “I’ll be more in charge of checking the safety of our calculation, rather than just doing the motions of the calculation.”

FUTURE PLANS
De Nooy has a little over a year before his time with the National Guard ends. But he’s already making tentative plans for another way to serve. De Nooy hopes to do humanitarian aid work in Burma in southeast Asia through the organization Free Burma Rangers. The role of ranger would combine his faith and the skills he’s learned in the military.

De Nooy explained how Burma has been involved in the longest civil war in history. Free Burma Rangers is a unique humanitarian aid organization in that its rangers bring aid to people on the frontlines of the conflict. Many of the rangers go in armed, though their weapons are strictly for defensive purposes. The Free Burma Rangers are led by director David Eubank, an ex-special forces captain and a Christian.

“Though his organization isn’t primarily about the spreading of the gospel, he does encourage it if you’re so inclined while you serve in his organization,” De Nooy said. “That’s going to be another large component of what I’ll be doing over there.”

Time will tell how God will use De Nooy and his desire to serve in Burma. For now, he’ll continue to work, finish out his contract with the National Guard, and build up his finances to support himself in Burma.

It’s been nearly a decade since De Nooy joined the National Guard, and it’s certainly been a time of learning and growth. De Nooy noted the people he has served with have been a big part of what has made it a good experience.

“Just getting to know them and forming those relationships – that’s really integral to you enjoying your time in,” De Nooy said.

Thank you, Sergeant De Nooy, for following through on your desire to give back. We are grateful for your service! 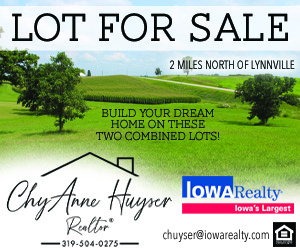