God’s goodness has carried Kelsie Van Haaften, her daughters, and extended family since the passing of their husband, father, son, and friend on Feb. 26. Barry Van Haaften courageously fought leukemia for two years before God called him home nearly two months ago. On Saturday, Apr. 10, God’s goodness continued to abundantly flow through the outpouring of support from family, friends, and acquaintances at the Van Haaften Benefit held to help cover the family in financial support.

Through a freewill donation supper, silent and live auctions, and T-shirt sales, $220,630.61 was raised for Kelsie and her three young daughters, Addison, Emmalea, and Everlea. The monetary amount from Saturday does not include the generous donations received prior to the benefit, or any support received via Venmo or donations that are still coming in. 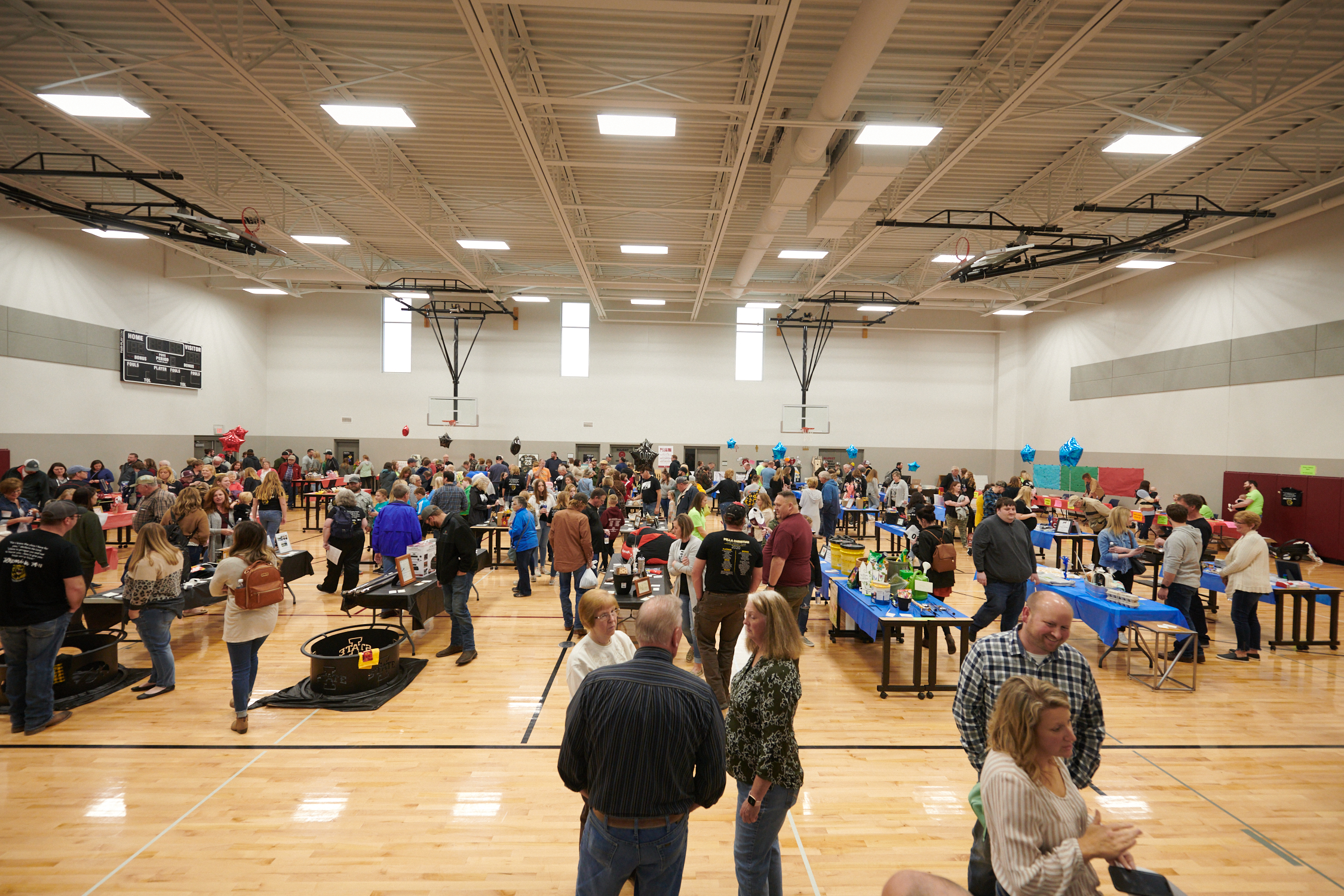 Attendees of the Van Haaften benefit peruse the makeshift asiles of donated items that were auctioned off later in the evening.

Saturday’s benefit drew over 1,000 people who wanted to cover the Van Haaften family in love, support, and prayer. The in-person event including the freewill donation supper and auctions drew a crowd of 775 people inside Pella Christian Grade School. Organizers held a drive-through supper that attracted another 350 people who couldn’t attend in person.

“Overwhelmingly blessed. The love and support I feel after Saturday evening is just incredible. I never dreamed the benefit would raise that much money, and it still really hasn’t set in yet, but what a huge relief for me as I continue to look at our future without Barry,” said Kelsie. “Barry’s #1 goal was to provide for his family, and every person who donated or attended the benefit took over that role for him, and I am so grateful for that.”

Organizers of the benefit spent countless hours figuring out all of the details, advertising for the event, and gathering donations. Between both the silent and live auctions, the benefit featured 293 valuable items. Seven firearms were on the auction list and generated the biggest response, bringing in nearly $30,000. 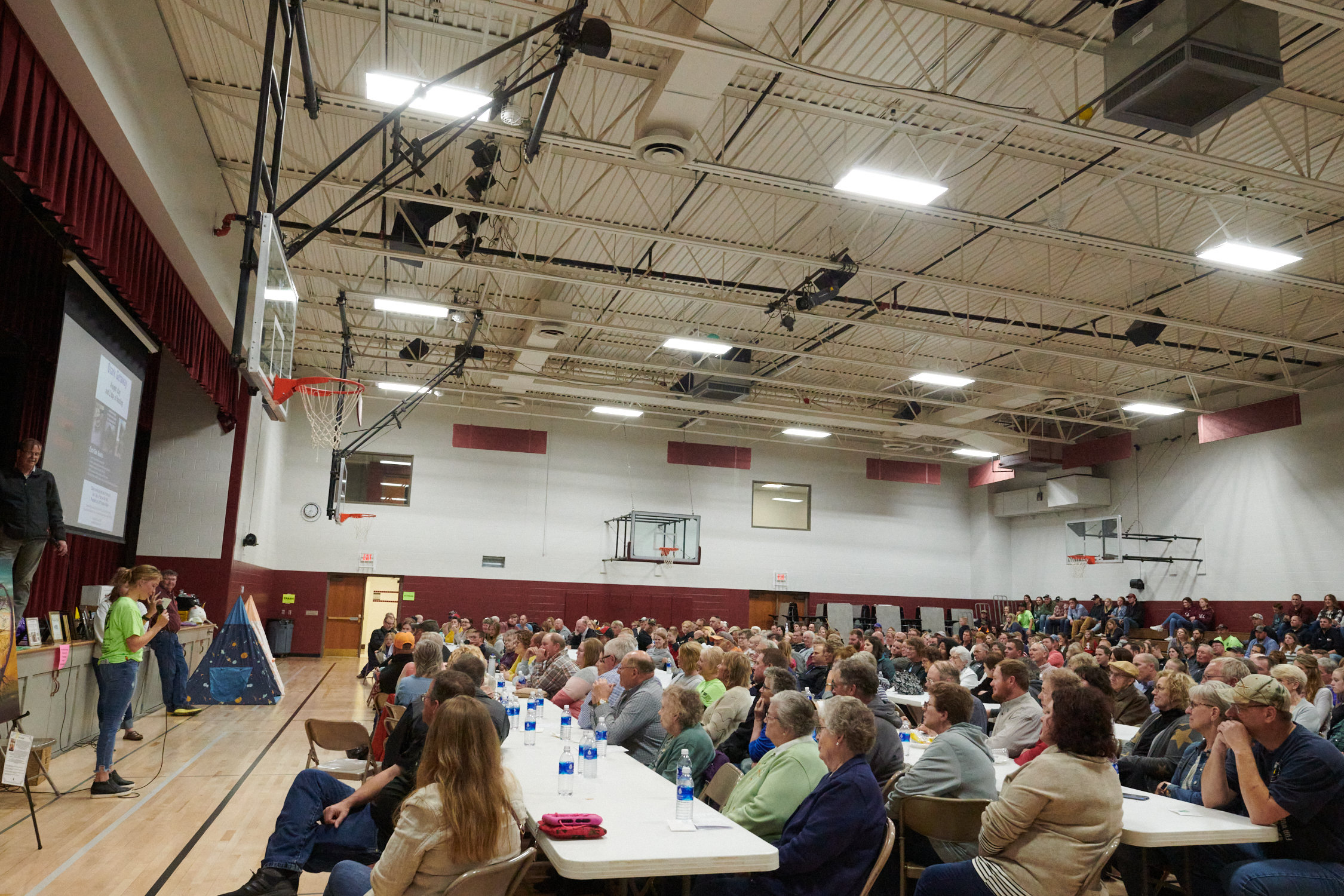 Kelsie Van Haaften addresses the large crowd of supporters who attended the Apr. 10 benefit at Pella Christian Grade School. Organizers report 775 people attended the event in person, and another 350 took advantage of the drive-through supper option. Organizers report they had the wonderful problem of running out of food at the drive-through supper location due to the overwhelming response and support.

Other high-value auction items bringing in over $3,000 each were the Bad Boy mower, tree of life painting, Wyffels Seed, custom-built farm table package, Coffee Cup Cafe coconut cream pie, upright freezer, and a heifer bottle calf. There were numerous items that exceeded the $2,000-plus bid level.

“We were just absolutely blown away,” said Jentri Van Wyngarden of the community support for the Van Haaften family. Van Wyngarden was one of several organizers who was instrumental in the benefit’s success.

For Kelsie, the sense of gratitude she has for the support she and her family have received since Barry’s diagnosis over two years ago, through his treatment and hospitalizations, and now after his passing, is overwhelming. “I’m grateful that I have an amazing support system and community that will walk alongside me as this journey continues for us for years to come,” said Kelsie. “I want to say a big thank you to the committee that worked so many hours to make this benefit possible. It ran so smoothly, this would not have happened without them.”

Prior to the benefit, there was a T-shirt fundraiser that sold over 400 shirts, raising $4,540. Many people in attendance Saturday night donned the shirts that were custom made to be a perfect reflection of Barry. The shirt design included God is good and Jeremiah 29:11, which were and continue to be sources of strength for the Van Haaften family. T-shirts may still be purchased with all proceeds going to Kelsie and her daughters. Anyone interested is encouraged to call Cayla Wichhart, another benefit organizer, at 641-780-7597 before Apr. 18. Shirts will be available for pick up on Apr. 28 with locations and times to be determined. Decals with Barry’s trademark bear design are also available for $5 each.

As Kelsie and her daughters move forward without their husband and father, they are comforted knowing they have the love, support, and prayers from the community. Kelsie’s strength comes from her Savior, and she is committed to carrying on the strong legacy Barry left and continue their family’s story of God’s faithfulness despite the storms of this earthly life.

“As I was pulling into my driveway at 11:30 Saturday evening, ‘God’s Not Done With You’ came on the radio and that just brought everything full circle for me. Barry may not be able to encourage people himself anymore, but now it’s my turn to continue the legacy he left behind, continuing to encourage people to push through the hard times because God’s not done with your story, and encouraging people to pray for the big miracle but not to lose sight of all the things that God is doing in the day to day,” said Kelsie.