Older adults experience ride of a lifetime thanks to dynamic duo, Whistle-Nut and Ole

Residents of Fair Haven East, Pella Manor, The Cottages, and Jefferson Place in Pella were treated to the visit – and for some the ride – of a lifetime on Monday, Jan.  20, when professional rodeo barrelman Jason Dent and his 2,000-pound bull Ole spent the afternoon inside their community homes.

All four locations operate under Hearthstone – A Ministry of WesleyLife. Their mission includes providing experiences for their residents, clients, and team members. On Monday, they certainly did just that when the professional rodeo barrelman and bull visited all four locations and gave over 200 residents, family members, and visitors the opportunity to meet, pet, and even take a ride on Ole. The visit from the friendly bull, who is 14 years old, gave new meaning to Hearthstone’s pet-friendly policy! 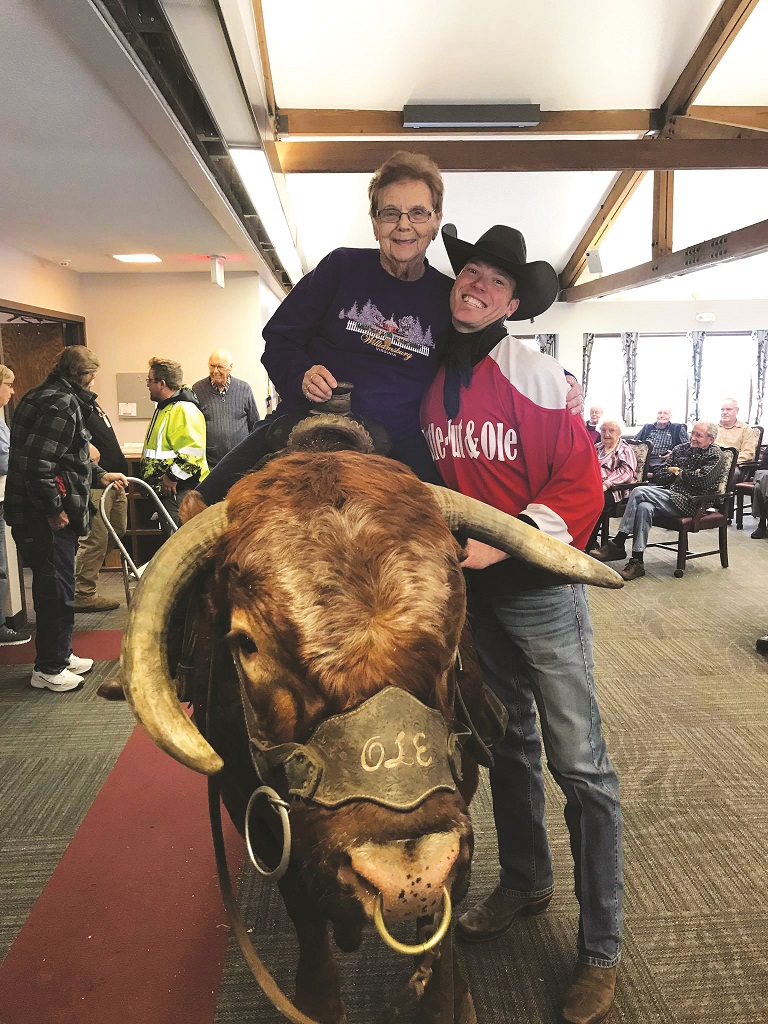 Joan Verhey, formerly of Sully, smiles atop Ole, a 2,000-pound bull who accompanies his owner Jason “Whistle-Nut” Dent on special visits across the country.

Dent and Ole’s unique and fun appearance in Pella made the national news, airing on the CBS Evening News with Norah O’Donnell on Jan. 22. Omar Villafranca, reporting for CBS, said in his segment, “It takes a special combination of courage and craziness to ride a bucking bull, and a total lack of sanity to set one loose in a senior center.”

Several Hearthstone employees with local ties were instrumental in making the visit a success. Sami De Bruin, daughter of Kevin and June Veenstra of rural Grinnell, is a lifestyle coordinator at Hearthstone who worked directly with Dent to schedule the visit after she learned about a similar visit made at a community center in Ottumwa. Natasha Nikkel of rural Sully, Hearthstone’s wellness director,   Marlene Bryan of Searsboro, an LPN/restorative nurse, as well as Steve Scull of Lynnville all helped with duties before and the day of the visit to ensure resident safety and enjoyment. Nikkel reports once the event was scheduled, the team had to gather liability forms, sign media releases for the CBS segment, and ensure a safe way for residents to get on the animal. Nikkel even got to ride Ole out of the facility, leaning to make it under doorways, as he wrapped up his appearance.

Marlene Bryan of Searsboro, RN/restorative nurse at Hearthstone, smiles as she assists a resident during her ride on Ole the bull. The fun and unique visit was made possible through a team effort of Hearthstone employees.

Dent is a native of Humeston who has a wide variety of talents and experiences to his name – professional rodeo barrelman, entertainer, comedian, stuntman, and auctioneer. He and Ole, his trained, 2,000-pound bull, delight in bringing their brand of fun to countless people. They have visited several senior centers and care facilities across Iowa and the United States where they meet residents, share adventures, and create an unforgettable experience as seniors well into their 90s saddle up on Ole for an amazing time. You may also recognize Dent from his appearance on season 19 of the CBS reality “Big Brother” series.