Todd Johnson of rural Killduff is living every hunter’s dream after shooting a brute of a 25-point buck on Sunday, Dec. 5, during Iowa’s first shotgun season.

When the deer first came within range, Johnson realized it was the “biggest deer I had ever seen on hoof, but I didn’t know exactly how big it was.” After his initial shots, the buck ran 10 yards and laid down in an area not visible from where Johnson was standing. Two members of Johnson’s hunting group were almost finished walking the piece, and they instantly saw the buck had laid down in the brush. “Once it was confirmed the buck was dead, I began to hoot and holler!” said Johnson.

Unofficially, the buck has a gross score of 236-5/8 and a net score of 228-6/8. The official score will be taken after a 60-day mandatory drying period and will be recorded by a Boone and Crockett official measurer. According to the Iowa DNR website, Johnson’s newly harvested deer is likely a record breaker amongst trophy deer officially recorded for Jasper County, where it was shot. Although the official score of Johnson’s deer won’t be known for 60 days, it’s probable that it will exceed Jasper County’s previous largest trophy deer (recorded with the Iowa DNR) which has a net score of 207-5/8 and was shot by Jack Carpenter in 2010. To find more information about trophy bucks harvested in Iowa, visit www.iowadnr.gov, scroll down the page and click on the Iowa’s Record Bucks link, then choose List of Iowa Trophy Deer. 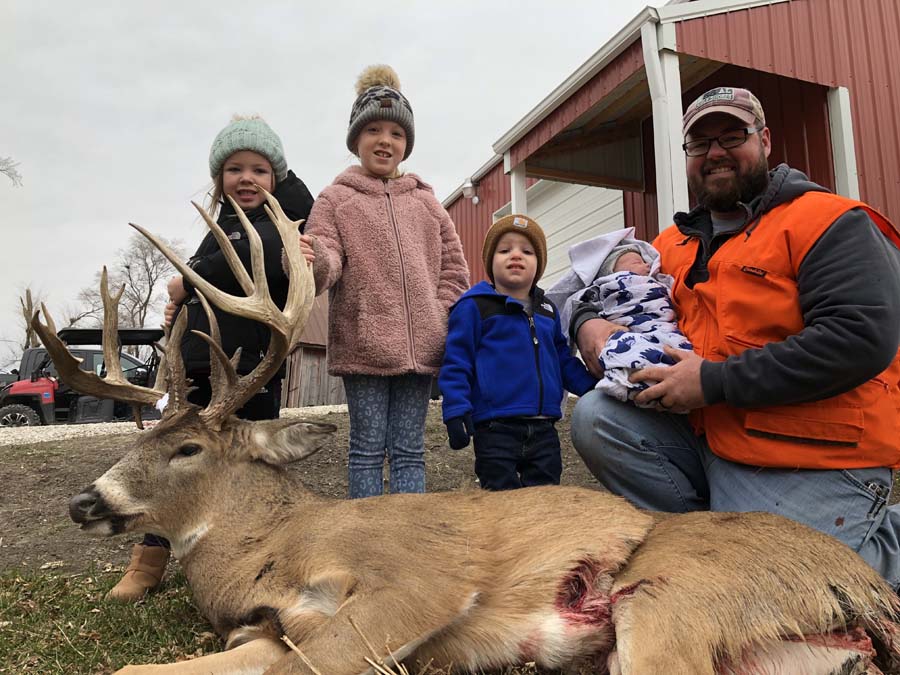 The trophy buck will eventually be decorating the walls of the Johnson family home. Johnson has enlisted the help of Scott Rolffs, owner of Rolffs Taxidermy located just outside of Lynnville, with the task of creating a shoulder mount of the deer.

“Scott is well known among hunters for his meticulous work and having the highest quality standards of his mounts,” said Johnson.

Johnson’s love of hunting started as a young boy. His first exposure to deer hunting came with his dad, Gordy Johnson, when he was able to sit in the tree stand while Gordy hunted with a bow. Johnson began bowhunting as a teenager and now only hunts during shotgun season around Jasper County. He has been hunting with the same group for 12 years, and 2021’s hunt has certainly proved to be one of the more memorable seasons.