For nearly a decade, Kevin Johnson, Lynnville-Sully Middle School Language Arts teacher, has invited ESPN’s Drew Gallagher virtually into his classroom as part of an eighth-grade unit of study on the 9/11 attacks. Gallagher is the producer of “The Man in the Red Bandana,” a 10-minute documentary for ESPN about Welles Crowther, an equities trader who became a hero when he saved the lives of dozens of people – and lost his own – in the World Trade Center’s South Tower on 9/11. Johnson shows the documentary to his eighth graders every year, and the class also virtually interviews Gallagher annually.

Twenty years after the tragic attacks, the roles were reversed. Johnson, his wife Sara, and children Madison and Noah were invited as guests of Gallagher’s for College GameDay, ESPN’s pre-game show before the Sept. 11 Iowa-Iowa State game. Johnson and his family thought they were in for a once-in-a-lifetime experience, however they had no clue what Gallagher and the crew of College GameDay had in store for them.

Johnson and his family were on the road by 5:40 a.m. to make the trip to Ames where thousands of college football fans also gathered for the top-ten match-up. Due to his inside connections with Gallagher and Lyndsey Lloyd, a producer at College GameDay, Johnson had a parking pass and was able to meet the crew prior to the show.

The Johnson family was pleased to be given front row seats in the Home Depot section of the College GameDay stands. They had no idea they would soon be in the spotlight and called out on national television.

“As the show progressed, there were some great tributes to first responders of 9-11, and they showed how people across the country were honoring those who lost their lives that day. We noticed the camera coming into our area, but I didn't think much of it. Then I heard, ‘Crowther’s story of heroism, selflessness, has been used as a curriculum by Kevin Johnson....’” said Johnson. “Next I knew, the camera was on me and my family and a giant check was being presented on behalf of the Extra Yard for Teachers and Football College Playoffs for $2,000 in gift cards.”

The extra recognition came as a surprise to Johnson, who said Lyndsey was standing behind the camera smiling as the piece aired. Gallagher had nominated Johnson to be recognized in college football’s Extra Yard for Teachers Week for his on-going dedication to bringing awareness to youth of the day that changed America. Extra Yard for Teachers Week runs Sept. 10-18 and is an eight-day celebration dedicated to honoring and recognizing great teachers by the College Football Playoff (CFP) Foundation. Extra Yard for Teachers is CFP’s primary platform designed to elevate the teaching profession by inspiring and empowering teachers. 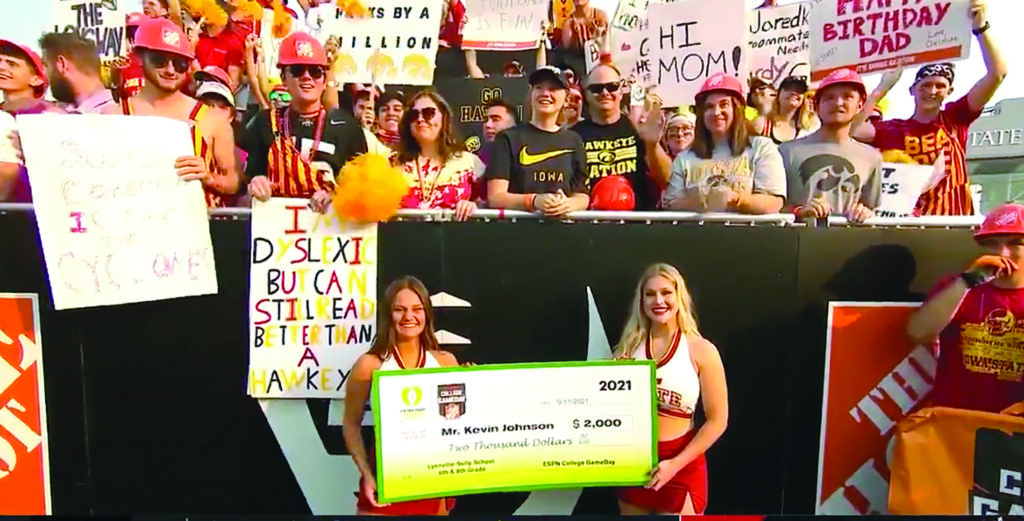 Madison, Kevin, Sara, and Noah Johnson, front row in the Hawkeye shirts, wave as Johnson is announced as the recipient of the Extra Yard for Teachers Award on ESPN’s College GameDay before the Sept. 11 game.

“It was an amazing experience for my family and I. I feel honored to be recognized. It is an honor to tell the story of Welles and others that made a difference on that day to my students with the help of all of those that have worked with me,” said Johnson.

In addition to Gallagher, who will be speaking to L-S eighth graders in October, Johnson has invited other special guests to recount their experiences of 9/11. Crowther’s mother, Alison, has been a virtual guest speaker for the class and will be speaking with
L-S eighth graders again later this month. Johnson had the opportunity to meet Jeff and Alison Crowther in person when he and Sara travelled to New York City in 2016 to receive the 9/11 Tribute Center Award. The award Johnson received five years ago in New York honors teachers who create exemplary educational projects that help students understand the impact of 9/11.

Johnson’s connections and dedication to teach his students about 9/11 has brought in other speakers, including Jean Cleere of Newton, whose husband was killed when the towers fell, as well as two New York City firefighters who have recounted their experiences and loss from that fateful day.

Johnson is currently leading his eighth graders through the 9/11 study. Look for a recap of their studies in a future issue of the Hometown Press.