Home is where the RV is: Where are they now? Featuring Michelle (Sylvester) Berns

ABOVE: Michelle and Dan Berns at the Arctic Circle in 2017.

“Where are they now?” is a Hometown Press column dedicated to catching up with people who have lived in or attended school in the Lynnville-Sully area.

“Where are they now?” is also a great question to ask regarding Lynnville-Sully alumna Michelle (Sylvester) Berns and her husband, Dan, who are full-time RV travelers.

From the shores of the Arctic Ocean in Alaska to the island city of Key West, FL, the Bernses’ travels have taken them to many of our country’s well-known as well as off-the-beaten-path destinations. And all the miles logged have come from the comfort of their own home, a 34-foot RV, with a Jeep Wrangler towed behind.

Michelle’s family, including her parents Walt and Ethel Sylvester, moved to rural Lynnville in 1976 to live on a farm that has been with the Sylvester family for over 100 years. Walt and Ethel lived at the farm until this past April.

Michelle graduated from Lynnville-Sully with the Class of 1984. After high school, she went on to the University of Iowa, where she earned her bachelor’s degree in mechanical engineering. She landed a job with Caterpillar in the Peoria, IL, area and worked there for 28 years until retiring late in 2016. For the last 12 years at Caterpillar, Michelle was an internal consultant for improving processes and implementing changes. She worked for a variety of departments and traveled to the company’s various facilities, mostly domestic, but also in Japan, China, England, Scotland, Belgium, France, Switzerland, Holland, Germany, and France.

It was at Caterpillar that Michelle met her husband, Dan Berns, a fellow mechanical engineer with the company. This summer, they will celebrate their 30th anniversary.

Dan and Michelle have one son, Alex, who followed the engineering path as well and is a computer engineer in the Twin Cities.

TAKING RV’ING TO  THE NEXT LEVEL 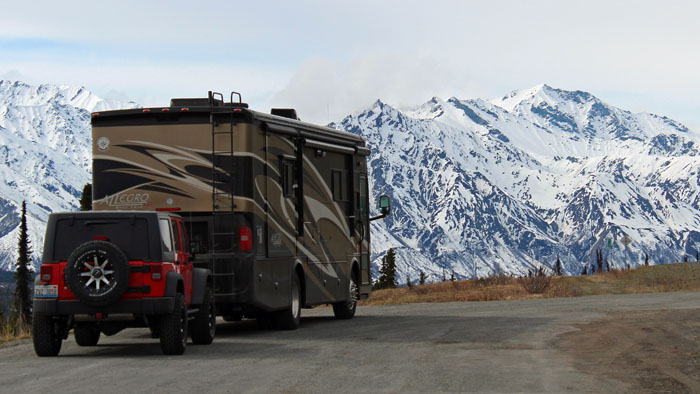 The Bernses’ coach and Jeep on the Alaska Highway.

The Bernses have enjoyed RV’ing throughout their three decades together. They started with a two-person RV and have owned quite a few coaches in the years since then.

Throughout all their working years, RV’ing was just something they did on the weekends and on vacations. But in 2017, for their first summer after retiring, the Bernses decided to spend it living out of their RV in Alaska. That’s when they questioned why they were hanging on to their house back in Peoria. Not only was it costing them money to pay somebody to take care of it, they also knew they didn’t want to stick around Peoria full-time because their son and parents weren’t in the area.

So, they sold the house and many of their possessions. Aside from some items of personal attachment kept in storage, the Bernses’ possessions all fit in their 34’ RV. They are, in Michelle’s words, “footloose and fancy free.”

When asked if she ever misses having a “stick and brick” house, Michelle replied with a laugh, “I miss my big shower and that’s about really it.”

With no home to keep up, Michelle and Dan are free to travel around the country in their RV, towing a four-wheel drive Jeep Wrangler behind them. They also have a furry companion – a 70-pound Labradoodle named Zoey – who has been with them their entire time of traveling full-time on the road.

This year, their travel plans were affected by COVID-19 as the Canada-U.S. land border is only open to people making trips for essential reasons, such as for work or school.  Instead of being in Alaska, the Bernses have been visiting their son in Minnesota. Next, they will head to the Rocky Mountains in Colorado to visit with friends and family for the duration of the summer.

“Gotta say, I had forgotten how hot and humid the Midwest can be in the summer,” Michelle said. “But we hope to go back to Alaska next summer.” 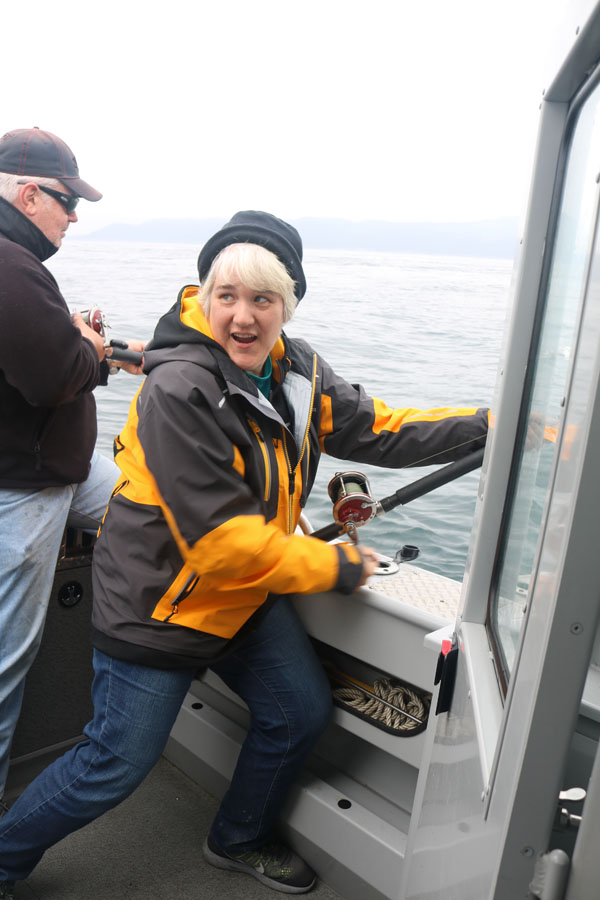 Wherever their travels take them, Michelle and Dan try to hit restaurants featured on the Food Network. They also like to try local places that aren’t quite as well-known.

“We always ask when we are in a grocery store or in a shop, so you’re a local, what’s your favorite restaurant?” Michelle said.

The type of food they eat depends on where they are in the U.S. Alaska is all about seafood and reindeer. Michelle claims the best clams and oysters are served at a little “dive” back in a boat yard in Homer, AK. The Bernses also like eating the salmon Dan catches in Alaska.

When they are in Arizona and Texas, Dan and Michelle are all about the Mexican and Tex-Mex food. Then in the Midwest, they enjoy the good beef and pork, particularly pork tenderloins, which are very hard to find outside of the Midwest.

One of Michelle’s favorite things to do is buy local seasonings, vinegars, wines, and salts. She uses them while cooking with her three-burner cooktop and tiny oven, both of which run off propane.

Throughout the course of their travels, Dan and Michelle have discovered a community of people who are full-time RV travelers like them. They sometimes cross paths and see the same people every year.

Between blogs and social media, the full-time RV’ers can keep in touch with each other. They are also a helpful resource for tips and recommendations specific to areas where they each have traveled.

Though Dan and Michelle love their current lifestyle, it’s not without a few challenges. Due to nationwide shutdowns with the rise of COVID-19, many campgrounds were closed, and full-time RV’ers had a difficult time finding places to stay. “We were lucky enough that we just drove in and stayed at my in-laws’,” Michelle said.

Another challenge is getting consistency in medical treatment for Dan and Michelle as well as vet care for their dog. They’ve also had to find emergency dental care while on the road. 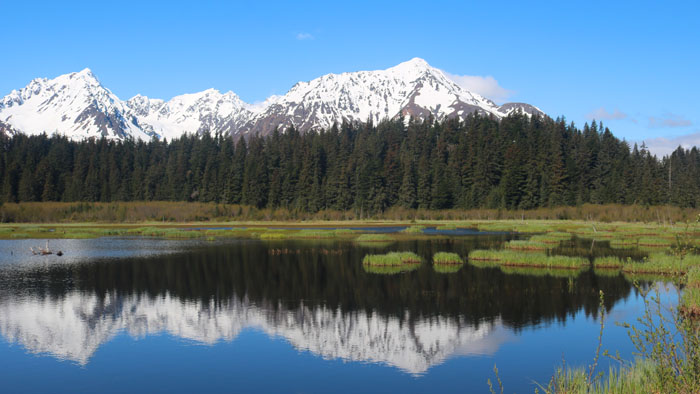 “That’s where some of our contacts in the full-time community are great,” Michelle said. Oftentimes, their RV’ing friends have recommendations of where to get quality care when those occasional health situations arise.

No doubt, one of the best parts of RV life is the scenery. Michelle said some of the best scenery they have seen is on the Alaska-Canadian (Alcan) Highway. It runs from Dawson Creek, British Columbia, to Fairbanks, AK. When they’ve taken the highway in the past, they have seen bear, moose, caribou, and mountain bison, among other wildlife. “It is some of the most awe-inspiring scenery you can imagine,” Michelle said.

See the pull-out box below for Dan and Michelle’s recommendations on places to visit.

From north to south, east to west, and everywhere in between, the Bernses are loving their easygoing lifestyle and having the ride of their life as they travel about in their RV.

“We thoroughly enjoy it, and I can’t imagine doing anything different than what we are doing right now,” Michelle said.

If any Hometown Press readers would like to keep up with the Bernses’ travels, request to join their private group called “Dan & Michelle Travels” on Facebook. 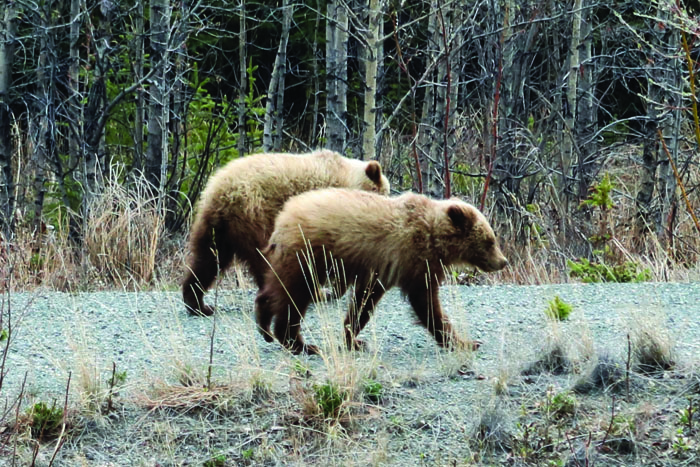 a pair of grizzly bear cubs, taken along the Alaska Highway in the Yukon Territory

Oh, the places they go:

Favorite place to visit: The Kenia Peninsula of Alaska because of its great fishing, hiking, camping, wildlife, and gorgeous views.

Favorite place to visit in the Lower 48: The shore of Lake Superior at Porcupine Mountain State Park in the Upper Peninsula of Michigan. “We visited here a lot when we were working, it was only a 10-hour drive from the Peoria area,” Michelle said. “You can camp a few yards from Superior, the views are gorgeous, but the black flies are vicious.”

Second Favorite Place in Lower 48: North Padre Island near Corpus Christie, TX. “We love the beach here!” Michelle said. She and her husband have been to NPI multiple times since retiring.

Farthest North & South: The Bernses have been as far north as Dead Horse, AK (Purdue Bay), where they waded in the Arctic Ocean. They have driven the entire length of the Trans-Alaskan pipeline from Purdue Bay to Valdez. They have been as far south (in the U.S.) as Key West, FL.

Miles logged per year: Over the last three years of full-time RV’ing, the Bernses have averaged around 25,000 miles of travel each year.

States NOT visited: The only states the Bernses have not traveled to are North Dakota and Hawaii. 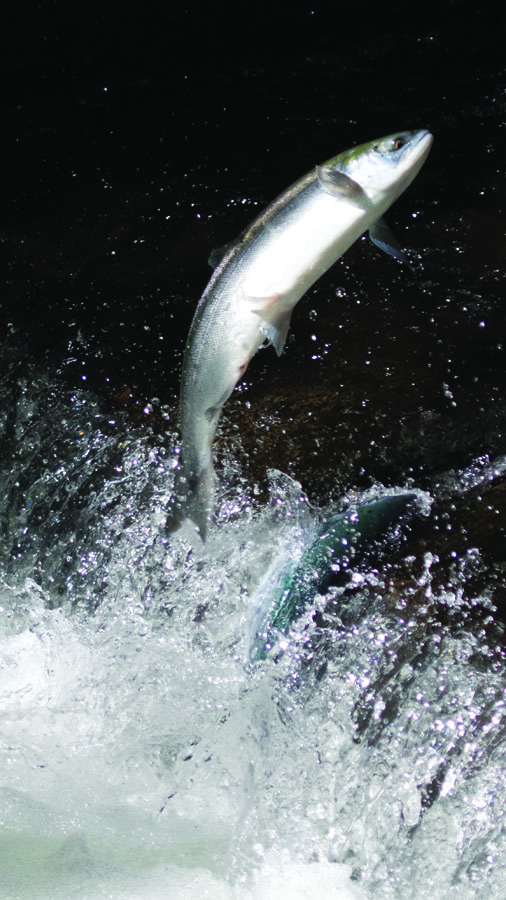 red salmon at the weir, used by the Alaska DNR to count the salmon running upstream 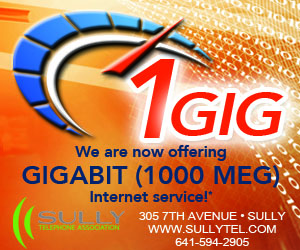