The Lynnville-Sully girls and boys track and field teams had a remarkable showing at the May 12 state-qualifying meet held at Wayne High School in Corydon. The girls team finished third overall and will compete in five events at state – Abby Squires in the discus, Greenlee Smock in the 3,000m run, and the 4x100, 4x800, and distance medley relays. The boys team won the state-qualifying meet, and they are sending six athletes along with alternates to compete in eight events at state – Ryan Annee in the long jump, Kyle Squires in the shot put, Conner Maston in the 400m dash, James Gruver in the 400m hurdles, the 4x100, 4x200, 4x400, and sprint medley relays. The Iowa High School Track and Field Championships will be held May 19-21 at Drake Stadium in Des Moines. 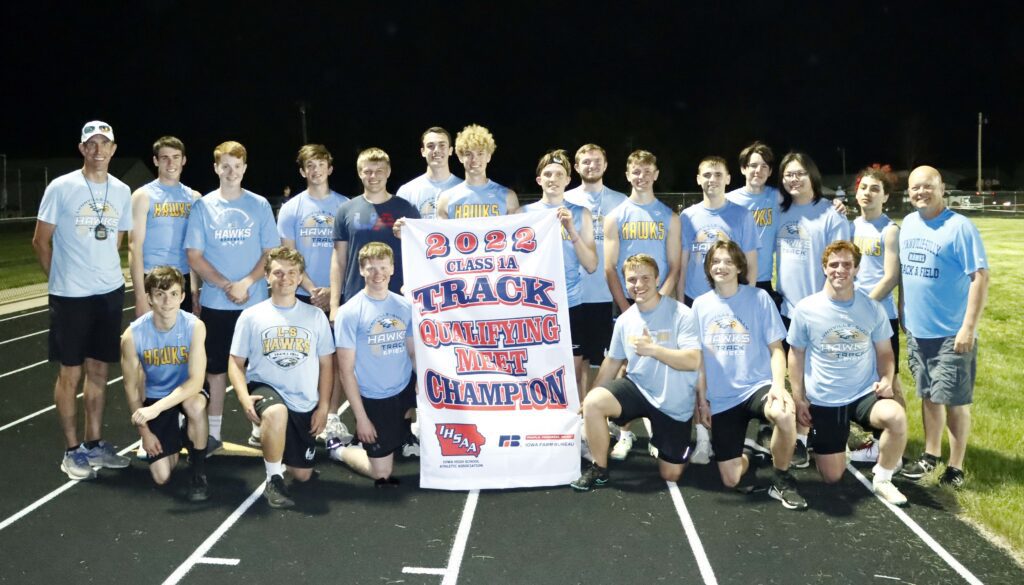 On a night when every point was crucial and a state appearance was on the line, the Lynnville-Sully Hawks left it all on the track at the state-qualifying meet on Thursday, May 12, at Wayne in Corydon. From start to finish, the Hawks competed hard. Their efforts were rewarded with a district champion-ship banner, six members qualifying for the state meet, and the chance to compete for team points May 19-21 at the state track and field meet at Drake University.

“Amazing! Absolutely amazing for this group of 19 young men to put forth the effort, focus, preparation, and determination to be able to earn the title of state- qualifying meet CHAMPIONS!” said L-S Coach Arkema. L-S won the meet with 117 team points, followed by Mount Ayr (105), Lamoni (92), and North Mahaska (90).

The Hawks’ intensity and drive matched the extreme heat that was near 100 degrees for much of the night. Junior Kyle Squires had another PR night and punched his ticket to the state track and field meet in the shot put. On his final throw, Squires went over 45 feet for the first time, good for gold and an automatic qualification for state. Sophomore Isaac Vos also had a PR showing in the shot put and earned valuable points as he placed sixth.

In the long jump, senior Ryan Annee was just edged out of gold and placed second with a leap of 20’7.25”. His leap was good for a state qualification.

Senior Gage Elscott closed out his track and field career with a seventh-place finish in the long jump. Senior Mason Rodibaugh also closed out his career with a fourth-place finish in the discus, throwing 108’5” for fourth place and crucial points for the team score. Benjamin Ochirbat, another senior, threw for the Hawks one final time in the discus, getting 10th place with a toss of 95’10”.

Despite having the highest mark among competitors in the high jump, the Hawks bypassed that event, as well as a few others the athletes have run in this season, and chose to use athletes in other running events.

The Hawks’ sprint medley team of Squires, sophomore Corder Noun Harder, senior Josh Hardenbrook, and junior Conner Maston set the tone early, just like they have all season. The finish came down to the wire and it was determined the Hawks were edged out by 1/100th of a second in a time of 1:37.93. Their time qualifies them for state, where they will go into the event with the 11th-fastest mark.

The 4x800 team of seniors Braden Alberts, Owen Norrish, freshman Hendrick Lowry, and Morningstar gutted it out in the heat and locked in fourth place with a time of 11:24.02.

After the mandatory 45-minute break, the running events continued. The Hawks’ shuttle hurdle team, which didn’t even exist at the start of the season, just missed their chance at state with a second-place finish in 1:09.80. Juniors James Gruver and Bryce Richards as well as freshman Aidan Stock and Austin Larson make up the shuttle hurdle team and all will be returning to better that time next season.

Stock was right back on the track for the next race, the 100m dash. He placed fifth in his second of three consecutive races. Senior Noah Johnson ran his last time for the Hawks in the 100m dash and finished 18th.

The distance medley team of Alberts, Stock, Richards, and Lowry were quick and held off challengers for a solid fourth-place finish in 4:07.87.

The 400m dash was loaded with competition, including the top 400m runner in Class 1A. Maston crossed the finish line in third place in a time of 52.35 seconds. His time qualifies him for state in the 400m dash where he will look to improve on his time. One race later, Maston joined his 4x200 teammates of Noun Harder, Annee, and Hardenbrook and the quad smoked the competition to win the event easily in 1:33.50, an automatic state qualifier.

Annee and Richards both ran excellent times in the 200m dash to earn valuable points for the Hawks, finishing in fifth and sixth place respectively. Next up was the 400m hurdles where Gruver kept right up with one of the top hurdlers in the state to finish second with a personal best time of 56.93 seconds. His time qualifies for state as well.

The meet championship came down to the final two relays and the Hawks rose to the challenge. The 4x100 team of Squires, Annee, Hardenbrook, and Noun Harder were quick and had clean exchanges to earn the automatic state qualification with a first-place finish in 44.70.

The 4x400 team of Hardenbrook, Noun Harder, Gruver and Maston ran neck-and-neck with a top Mount Ayr team. All four runners had excellent splits as they battled it out to finish in second place, shaving five seconds off their previous best time, in 3:29.91. They qualify for state and go into the state meet with the fifth-fastest time.

The Hawks will compete at the state track and field meet held at Drake Stadium in Des Moines May 19-21. See the graphic below for specific times for L-S athletes. Tickets must be purchased online in advance by visiting iahsaa.org/tickets/ and following the prompts. 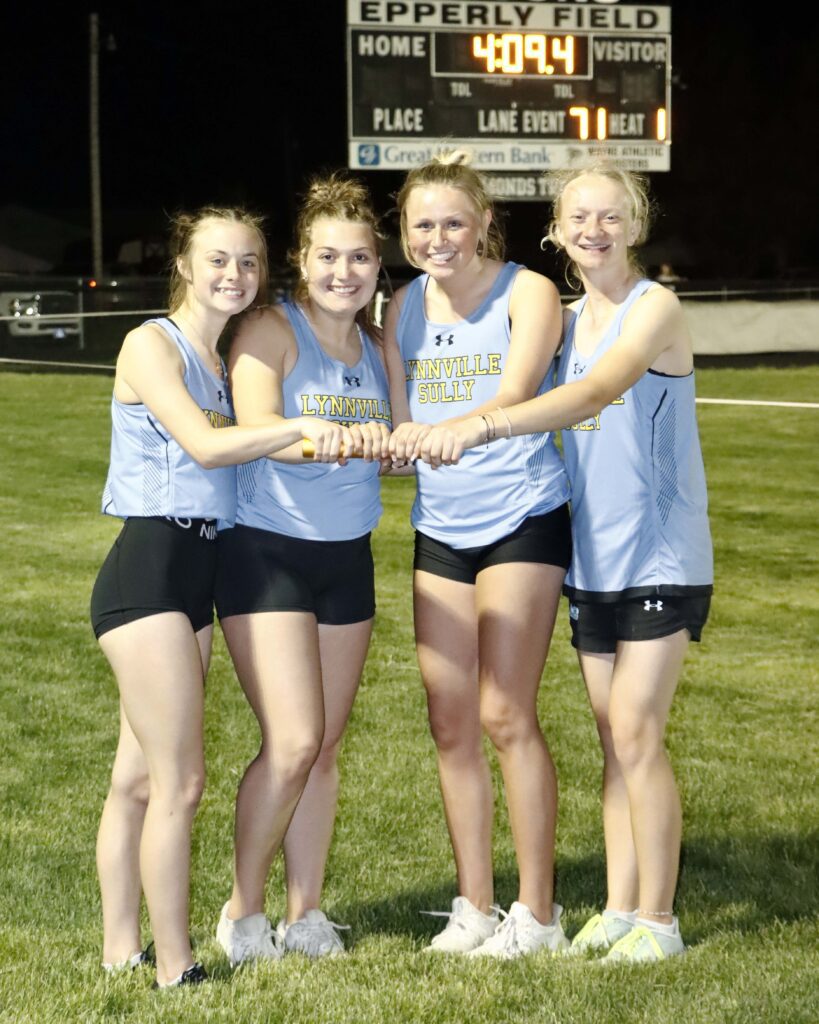 The distance medley team of Carsyn McFarland, Aliya James, Kinsley Tice, and Greenlee Smock qualified for state after finishing first at the qualifying meet held at Wayne High School on May 12.

Running at the district state- qualifying meet at Wayne of Corydon on Thursday, May 12, the Lynnville-Sully girls track and field team battled through extreme heat and tough competition for a third-place team finish. The team knew they had four automatic state after Thursday’s meet. Once the final state-qualifying meet wrapped up on Friday, the Hawks learned they would add a fifth event to their 2022 state track and field resume.

Junior Greenlee Smock won 3,000m run at the district meet in 12:56.47 to punch her ticket to state. She anchored the next race, the 4x800m relay, to a victory in 10:57.32, for another automatic state qualification for the Hawks. Other members of the 4x800 running hard in the heat were freshman Olivia Norrish, senior Callista Hackert, and junior Kinsley Tice. The distance medley relay team of sophomore Carsyn McFarland, senior Aliya James, Tice, and Smock ran a 4:46.78 for a first-place finish and a chance to run at state. 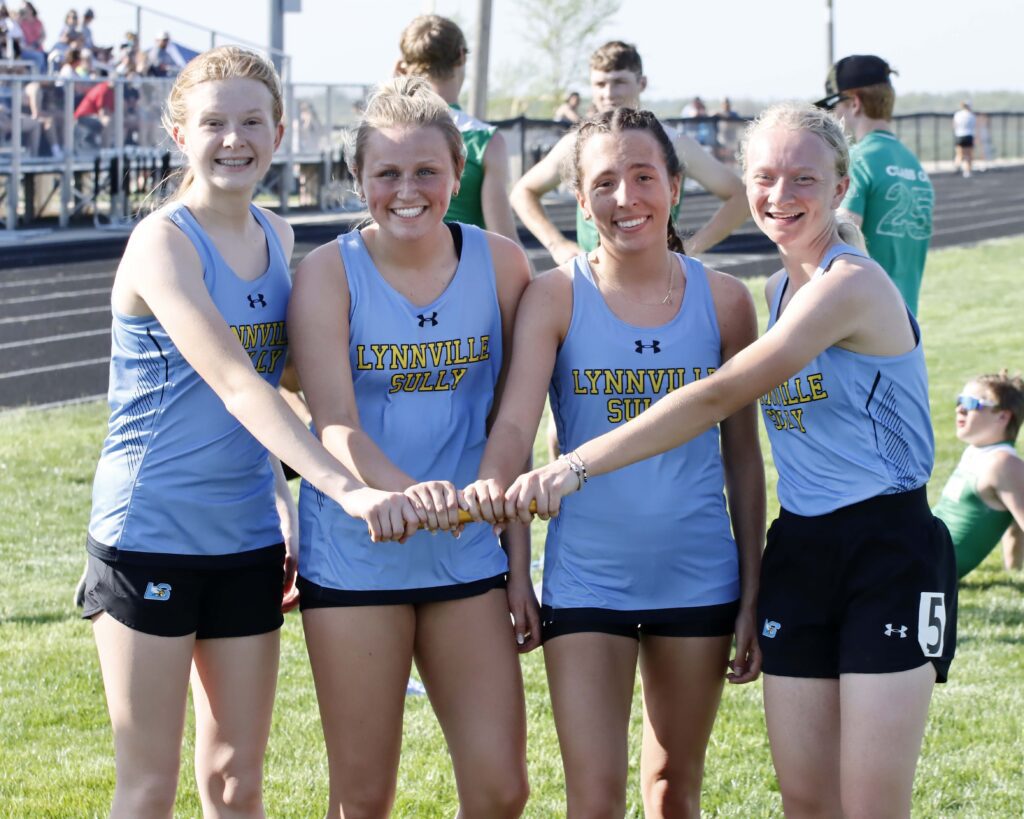 The 4x100 relay team of C. McFarland, James, and seniors Sydney Jansen and Reagan McFarland won their race for another state-qualifying event for the Hawks.

Junior Abby Squires hit a season-best mark in the discus with a throw of 107’-2” for a second place This qualified her for state, and she currently sits with the the 17th-best  throw in Class 1A.

“There were a lot of strong performances. The Hawks did a great job of battling the heat and competing all night long,” said Coach Kevin Johnson.

The Hawks will compete at the state track and field meet held at Drake Stadium in Des Moines May 19-21. See the graphic below for specific times for L-S athletes. Tickets must be purchased online in advance by visiting iahsaa.org/tickets/ and following the prompts. 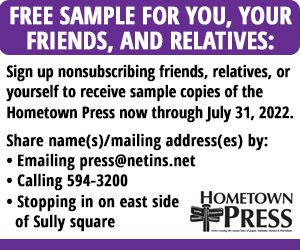