The Lynnville-Sully wrestling team experienced a successful Saturday on the mat at the North Mahaska Invitational on Jan. 5. The Hawks finished the day with five out of five wrestlers on the podium.

Senior Ty Breeden went undefeated at North Mahaska, earning first place at 138 pounds. This was the first time he won a tournament.

Breeden beat Des Moines Lincoln’s Austin Eiskant by a 15-0 technical fall to start the day. Then, he pinned Ethan See of Grinnell in 1:50 and Austin Roush of Baxter in 34 seconds. Breeden won by forfeit over North Mahaska’s Cody Scholtas and pinned Grant Borts of Baxter in 1:08 to win the championship match.

Evan Squires, another L-S senior, also went undefeated, 2-0, and reached the top of the podium at 220 pounds. Like Breeden, this was Squires’ first time winning a tournament. He pinned Baxter’s Micah Kearns in 1:06 and then Dillan Lambert of Des Moines Lincoln in 1:58. 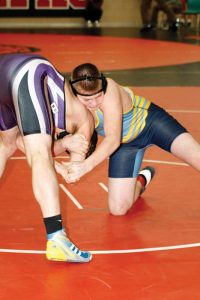 Freshman Brady Sassman brings down Ben Huff of Baxter, going on to earn the pin in 4:00 at the North Mahaska Invitational. Sassman placed third at 182 pounds.

Snethen wrestled at 132 pounds and finished with a 2-2 record. He pinned two opponents – Syed Mohammed Bilal of Cardinal Community in 1:10 and Miles Rich of Des Moines Lincoln in 2:43.

Van Wyk was in the 120-pound bracket and finished the day at 1-2. He pinned Connor Van Zee of Montezuma in 25 seconds.

“We wrestled well Saturday for our first meet after the break,” said L-S Coach Jason Walston. “There are things we need to work on, but I am very happy with the way we wrestled.”

Earlier in the week, the Hawks competed at a quadrangular meet at North Tama on Thursday, Jan. 3. It was their first event of the new year. L-S went 0-3 as a team, falling to HLV, North Tama, and Tripoli. Breeden finished the day with a 3-0 record.

In the 30-18 loss to HLV, the Hawks only won one contested match – a pin by Breeden over Marcus Kolesar in 1:42 at 138 pounds. Senior Caleb Barnett and freshman Miles Mintle each earned wins by forfeit. 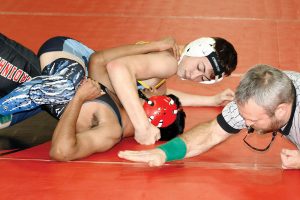 This week, the Hawks are at BGM for a triangular meet on Thursday. They were scheduled to compete in the Wayne of Corydon tournament this Saturday, but that event has been cancelled. Instead, the Hawks will wrestle in a tournament at Pleasantville.