Goodyk goes behind the lens to capture hurricane devastation

Feature photo: A southwest Louisiana homeowner stands by the flagpole he erected in front of what used to be his house while his neighbor sits on the front steps. The pile in the backyard is the shop where the homeowner worked to repair and build motorcycles for a living. His determined spirit was uplifting and encouraging. “When we drove up in a rented $80,000 BMW and $80,000 F250…this guy was offering us bottled water and food,” Monte Goodyk said. “It blew our mind.”

When Hurricane Laura slammed into the Louisiana Gulf Coast on Aug. 27, the Category 4 storm brought 150 mph winds and caused a 15-foot-high storm surge. On top of that, it dropped 10 inches of rain in some areas. The hardest-hit areas were southwestern Louisiana and southeastern Texas near the Gulf of Mexico.

The devastation — which sadly includes more than two dozen lives lost as well as an estimated $12 billion in damages — is hard to comprehend. And since the storm didn’t hit any major cities, there’s been a lack of news coverage and awareness of just how bad the situation is for tens of thousands of people.

For that reason, Sully photographer and filmmaker Monte Goodyk was asked to document areas hit hard by Laura and let the nation know that help is still very much needed in Louisiana and Texas.

As a self-employed filmmaker and photographer, Goodyk considers his forte to be documentary film-type work, and the “bread and butter” of his work — at least prior to COVID-19 — has been covering political events. He also works for Getty Images as a contributor of creative stills, creative film, and editorial film.

Goodyk’s studio is at his house in Sully, where he has the equipment and space to do everything from recording radio ads to recording bands.

A new venture of Goodyk’s is a podcast show called FatHead that he started in August with producer/writer/actor Christian Busath. It is available on YouTube and Apple Podcast. A few of the people they have interviewed on the podcast are Iowan comedian/actor Tom Arnold, 2020 Libertarian candidate Dr. Jo Jorgensen, and YouTube star Jack Vale.

Goodyk’s skills and social media following were what prompted his friend Michael Laws from Texas to ask him for help. Laws owns one of eight companies from Texas, Louisiana, and Alabama that teamed up to help with hurricane recovery efforts.

The eight companies put together a charity event for the people of Lake Charles, LA. They served over 1,000 hot meals for free and gave away thousands of dollars worth of hand sanitizer as well as chain saw oil, shovels, and other items needed to help recover.

“Part of the reason they asked me to come down was they weren’t getting any traction on the local news or national news,” Goodyk said. “Nobody was aware of the needs down there. In Lake Charles, LA, these people were already dirt poor, and then Hurricane Laura comes through and wipes them out even worse. Now most of the houses aren’t even salvageable.”

Goodyk headed south on Sept. 11 with the goal of documenting the damage done by Laura and getting it out to the media and the national news via his Getty Images account and social media following.

DRIVING INTO A  ‘WAR ZONE’ 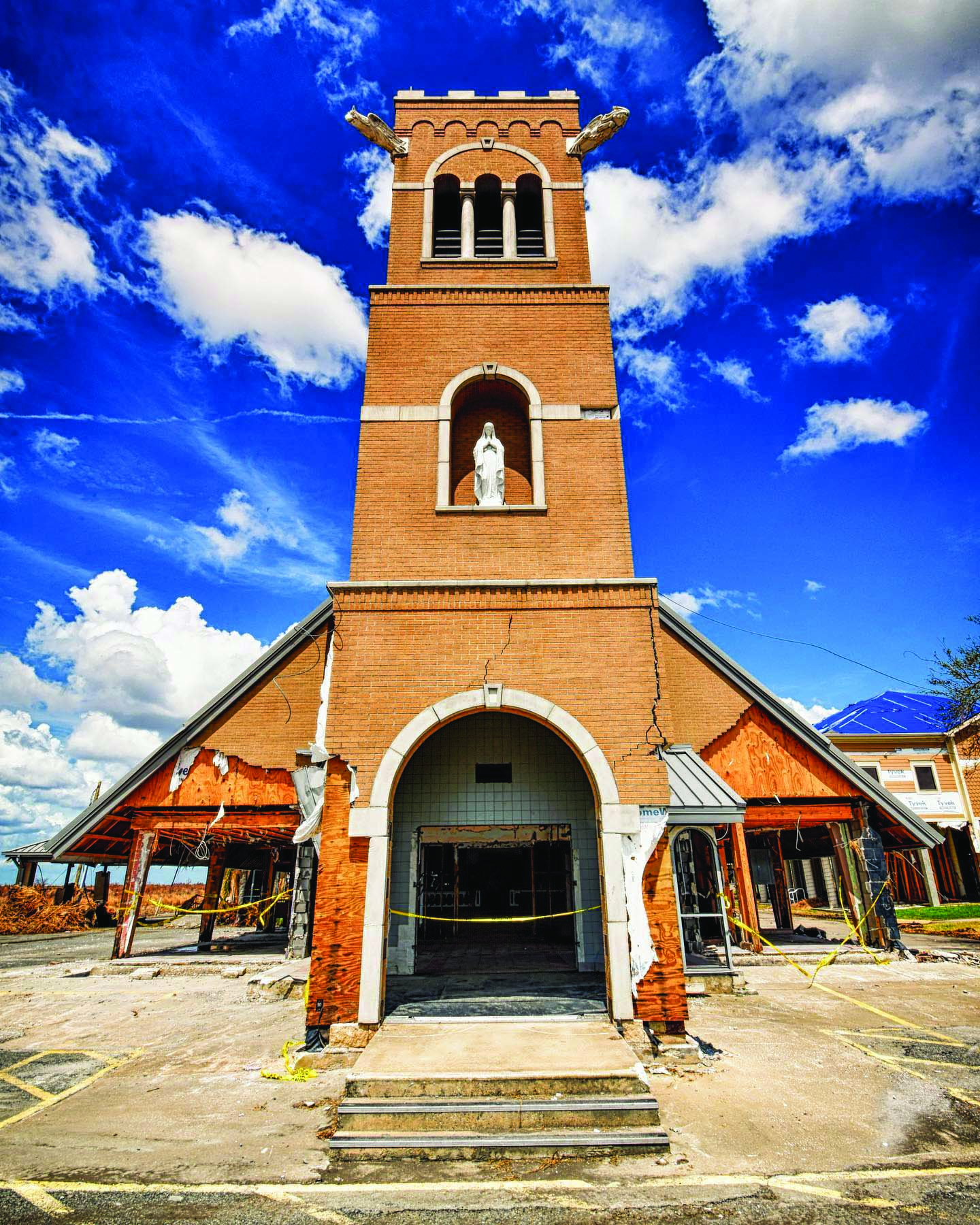 This church sustained heavy damage to its first floor due to the wind, rain, and flooding from Hurricane Laura.

Though the trip was made for professional reasons, what Goodyk saw affected him both personally and emotionally as he came across entire communities that were wiped out. Lake Charles, LA, a working-class city of roughly 78,000 people, was hit particularly hard and would be where Goodyk spent a lot of his time down south.

Driving into the worst of the damaged areas for the first time, he admits to bursting into tears. “I was literally driving into what looked like a war zone,” he said. “People were just standing in their front yards. They didn’t know what to do.”

Goodyk was part of a team of three people who worked together to document the damage done by the hurricane. Also on the team were Goodyk’s podcast partner, Christian Busath, and Penny Honodel, a producer from Alabama.

“That was really important to have somebody from the South to talk to the people for us so that they didn’t just think we were ‘Yankees’ invading,” Goodyk said, “Because that’s what they thought we were. They thought we were Yankees coming in to loot or do whatever.”

Five days were spent in the hot and humid weather capturing the worst parts of Lake Charles. When Goodyk arrived 2.5 weeks after Hurricane Laura hit, Lake Charles was still without power. At night, Goodyk and his team stayed in Port Arthur, TX, an hour away from Lake Charles, and even there, the power was not reliable. Several days, they had to leave their rental car idling during the day so they could charge the batteries for their filming equipment.

The team of three went door to door, with Honodel doing the introducing to each homeowner. Most of the residents they talked with didn’t want to be video recorded, but they still allowed the team to write down their stories and do some audio recording.

“Most of them didn’t want the attention,” Goodyk said.

He explained how many of the houses in Lake Charles were old and not in great shape even before the hurricane. They had no chance against the 120-130 mph winds and all the rain from Hurricane Laura. Some houses were ripped from their foundation and are just gone, with no sign of contents within eyesight.

Originally, Goodyk was going to spend three days documenting the damage, but that turned into a week and a half as he didn’t return to Iowa until Sept. 23. “Through the whole process, I got inspired and just wanted to not even focus on the filming and photography as I just wanted to get my hands dirty and help,” he said. “So that’s what we did.”

Footage of the hurricane damage documented by Goodyk can be viewed on his Facebook page, “Monte Goodyk Photography.”

Goodyk noted there truly was a lack of news coverage in Lake Charles, which he’d been told about before his trip south.

“In that whole week and a half, I never saw one reporter, one news truck, or any network or local cameras,” he said. “Not one single crew did I see anywhere in Lake Charles. I couldn’t believe it.”

RESILIENT PEOPLE IN NEED OF HELP

When Hurricane Laura hit, the storm tied for first with the highest wind speed measured for a hurricane to make landfall in Louisiana.

Six weeks after Laura, southern Louisiana — including Lake Charles — was hit again. Hurricane Delta made landfall on Oct. 9 with winds approaching 100 mph. It brought more flooding to already devastated neighborhoods and heavy rainfall that swamped homes, many that still had just tarps for roofs. 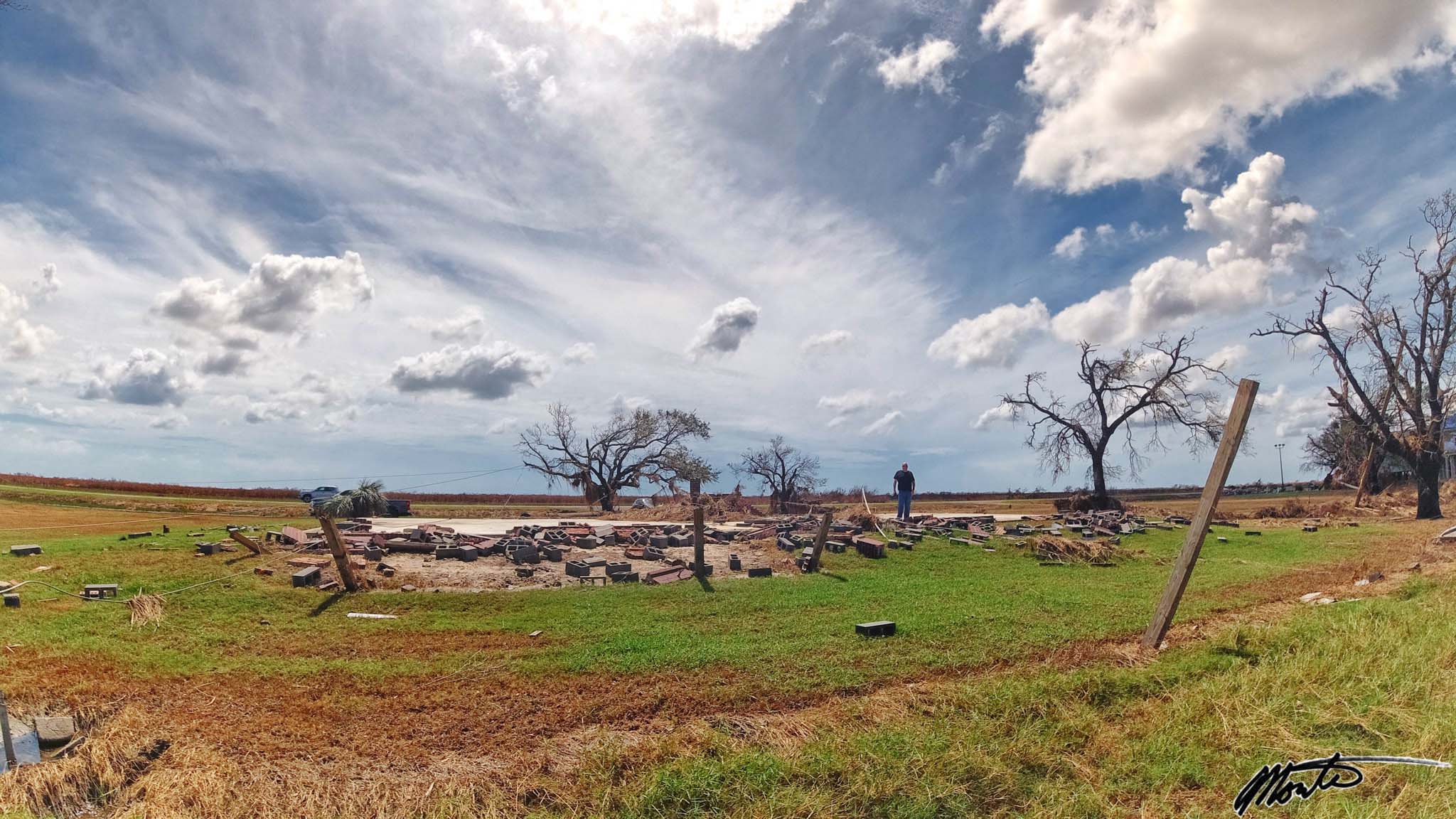 Goodyk stands on the foundation of what used to be a brick house. The house was completely destroyed by Hurricane Laura.

Even with all the devastation the people of Lake Charles have experienced, they are resilient and trying to put the pieces of their lives back together. However, the magnitude of the damage is so big, the city is going to need outside help to restore its homes and businesses. Since many of the residents aren’t willing or don’t know how or where to ask for help, others like Goodyk are asking for help for them.

Goodyk, his podcast partner, and some of the companies they worked with are hoping to create a new, self-funding non-profit YouTube Channel to benefit people in need. Once it is launched, the first goal will be to buy an entire block in Lake Charles where the homes were destroyed and can’t be rebuilt.

“We want to build new homes on that block and then give away those houses to the people who lived there before,” Goodyk said.

He also encourages people to give money via a GoFundMe account benefitting the Salvation Army, who continues to do a lot of work to help the people affected by Hurricane Laura.

To donate toward Hurricane Laura relief efforts, go to GoFundMe.com and search for “Spectrum Water Technology Hurricane Relief Fund” or go to salvationarmy.com. 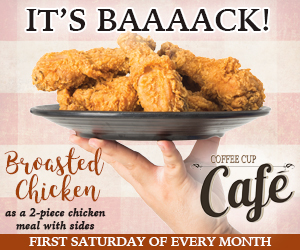