Photo: Ed Hoksbergen served in the U.S. Army from February 1954 through January 1956.

At age 20, Edward (Ed) Hoksbergen was engaged to be married and had hopes of getting started with farming on his own. However, those plans for his life got put on hold for two years as Hoksbergen instead dedicated himself to serving our country in the U.S. Army.

Hoksbergen was raised in Jasper County and graduated from Sully High School with the Class of 1952. In early 1954, with the U.S. draft going on, Hoksbergen requested an early draft into the U.S. Army so he could get in his two years of service and be discharged before March 1956 so he could start farming on his own that spring.

At the time he entered the Army, Hoksbergen was living with his parents, Nick and Jennie, and working for a neighboring farmer, Harry Springer.

Due to a faulty front rifle sight on test day, he scored very low and did not qualify for the infantry. That sent him on the route to medical training.

For six weeks, Hoks-bergen did his training as an aidman in San Antonio, TX. They practiced by going out, picking up soldiers with pretend injuries, and bringing them to the central office.

“The first week you were there, you were a victim,” Hoksbergen said. “The next week, you were the one in charge of bringing them in. That was the way you learned.” 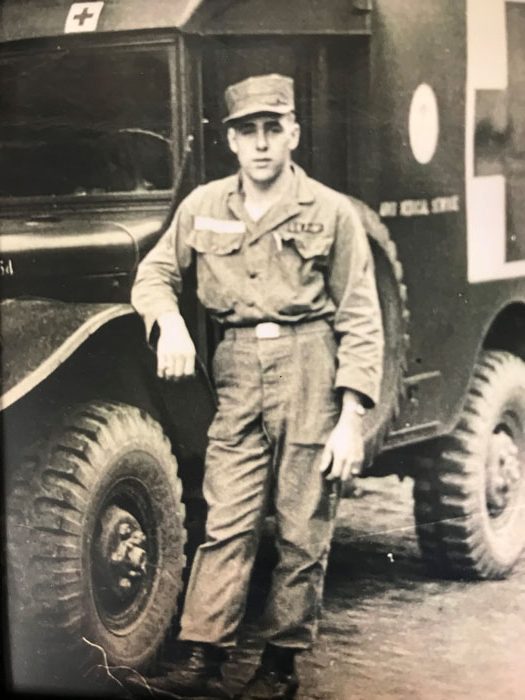 Ed Hoksbergen is pictured with the ambulance he drove while stationed in Metz, France, for 16 months.

From Texas, Hoksbergen headed to an air base in Kentucky. He and the other medics were in charge of going out on the range and bringing any airborne troopers, who got injured while landing, to the medical clinic.

The Army kept a presence in France at that time in case another war began in Germany.  Hoksbergen would end up spending 16 months in France — a time that was both “interesting and educational,” he said.

While on temporary duty in France, Hoksbergen’s responsibility was to drive an ambulance from a dispensary in Metz, where medicines and medical supplies were dispensed, to the Army’s main hospital in Verdun, about 40 miles away. The route was through the Alsace-Lorraine Mountains in an area that had been occupied by Germany and then France.

“There were little pill-boxes (concrete de-fenses/guard posts) along the road in places and underground tunnels that they used in World War I and II,” Hoksbergen said. “That was interesting driving along those.”

The people he transported in the ambulance were military members and their families. If they had a problem that couldn’t be taken care of it at the dispensary, they would be transported to the main hospital in Verdun.

Hoksbergen was one of four ambulance drivers and was on the night shift for the entirety of his time in France. One night in particular that stands out in his memory was when he drove a pregnant woman to Verdun. At the last minute, the doctor decided to ride along with the woman, which ended up being a very good thing. Partway through the drive, Hoksbergen had to stop the ambulance along the road where, while he held the mother’s hand, the baby was delivered.

“I was just glad the doctor went along,” Hoksbergen said with a laugh.

Another memorable night was making the drive through the mountains to Verdun on two-inch thick ice. The ambulance had chains on its back wheels and four-wheel drive, but it still took about two hours in the slick conditions to safely reach the main hospital.

“That was a very slow trip, and we stayed in Verdun overnight and returned to Metz the following day,” he recalled.

Even with some of those more intense drives, Hoksbergen described his job as ambulance driver as “very enjoyable” as it sure beat sitting around in the dispensary all the time.

One highlight from his time in France was being able to travel around Europe by train. He was able to visit a cousin in Mannheim, Germany, and the two traveled through Belgium and Luxembourg to go visit family in Holland. Hoksbergen also took advantage of a three-day pass to go visit Paris.

During his time in the military, Hoksbergen said his parents waited patiently for him to come home, as did his fiancée, Sylvia, who finished high school while he was gone. He kept in touch with them by mail. “With each letter that came, they knew I was fine a week ago,” he said.

Hoksbergen considers himself “very blessed” to be in the service between wars so he had no lingering effects from what he saw and lived through. “I also worked nights in France so was able to keep to myself and did not have to be a part of some things that could have tempted me,” he added.

Nearly 65 years later, Hoksbergen said, “Looking back, I can see God’s hand over me in many ways during that time.”

For example, the faulty rifle sight from his early days in the Army sent him on the medical path instead of infantry. Then later, his time as a medic assisting wounded paratroopers helped him to know he did not want to be a parachuter.

“Had I not had that fear (of being a paratrooper), I would have remained in the States my whole time of service,” Hoksbergen said. “I would have missed seeing Europe, my relatives in the Netherlands with my cousin, and experienced living abroad.”

Of his two years in the Army, Hoksbergen said, “It was a good learning experience. I learned to obey without questioning, to care for myself, and to respect others’ rights and beliefs even when they were different from me.”

Just two weeks after returning home from France, Hoksbergen married his wife, Sylvia, on Feb. 9 and began farming that spring. They raised four children — Mike, Darlys, Judith, and Sherryl — while living on the farm.

After farming for 24 years, they moved to Sully and lived there from 1980-1999. Hoksbergen was a custodian/maintenance man in the school system for 16 years. Upon retirement, he and Sylvia volunteered their services in various mission stations for 8-12 weeks during the fall and winter for 17 years. They are now retired again, living in the Pella Manor in Pella. They have 10 grandchildren and a growing number of great-grandchildren.

Thank you, Ed, for your service!