Taylor takes on climb of a lifetime

Over the past year, Randy Taylor of Galesburg has been experiencing one of the toughest, yet most rewarding climbs of his 69-year-old life. Since Mar. 13, 2019, he’s faced several “mountains,” been defeated, strengthened, and motivated by the rocky climb, and sat victorious at the peak of the mountain in more ways than one.

Locals know Taylor as the man with the camera strapped around his neck. For many years, he has captured memories behind the lens as he’s supported local students from the sidelines with his presence and camera at nearly every academic, athletic, and community event. 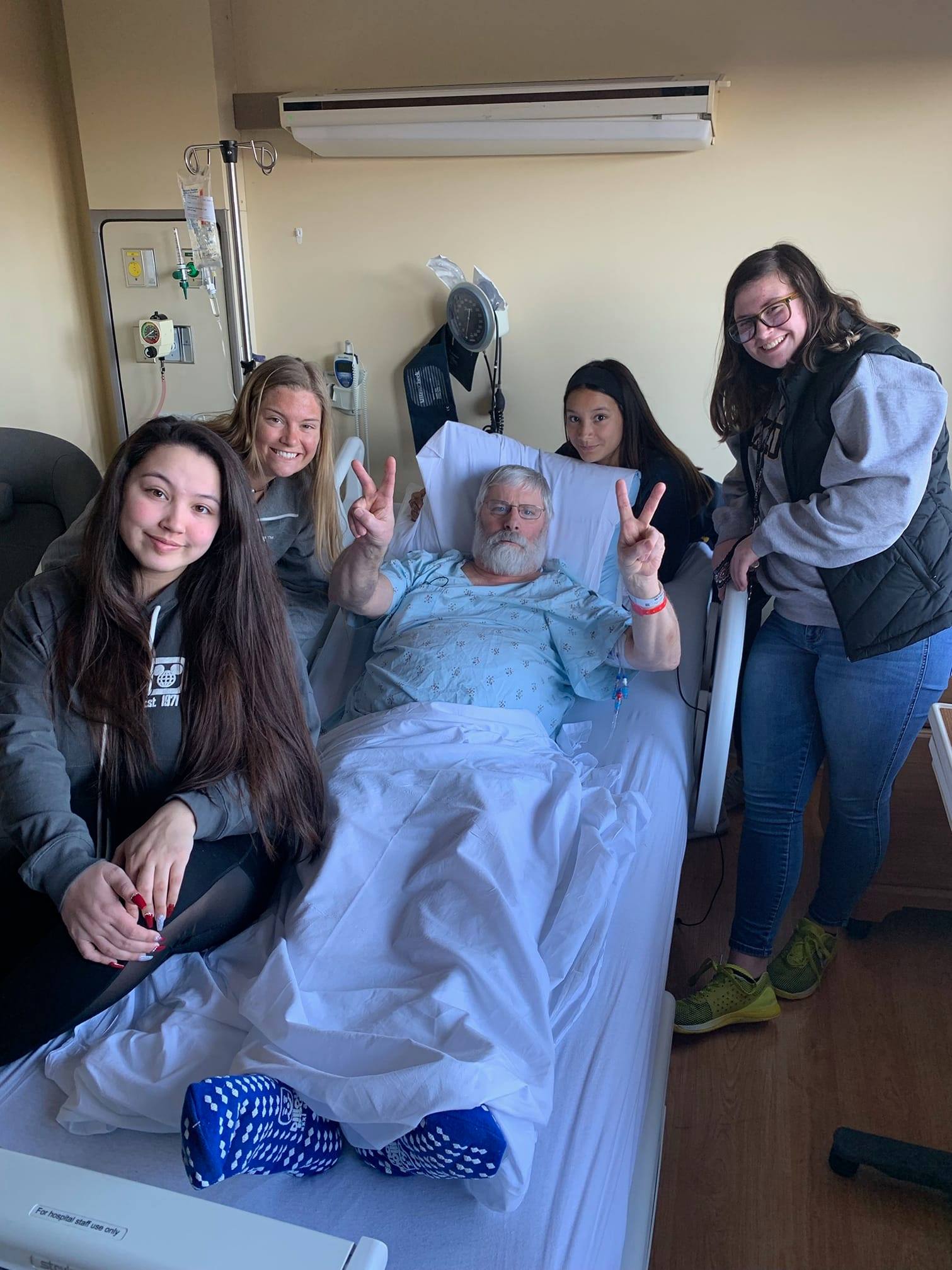 Taylor is surrounded by four of his grandchildren during recovery at the hospital. He credits his family with being a source of strength through the recovery process.

Last March, Taylor was like most Iowans, yearning for spring. Winter had stretched on long enough, and he was experiencing what he thought were the effects of being cooped up indoors. “I wasn’t feeling great but was blaming it on cabin fever and lack of doing much of anything,” said Taylor.

Mar. 13, 2019, dawned like any other day, and Taylor went about his daily routine. But that Wednesday morning soon turned into what he describes as “one of his two biggest red letter dates.” Taylor had noticed a sore left shoulder earlier in the day but brushed it off. It was when he was sitting at his desk located in the studio neighboring his home that the day went south, quickly. Taylor lost some function of his left hand while responding to emails. The symptoms got stronger, and he was overcome with dizziness after attempting to stand. He knew he had to get to the house where he told his wife, Pat, to call the doctor. Taylor recalls telling the nurse he needed to make an appointment but the nurse in no uncertain terms told him to get an ambulance instead.

That late winter day in 2019 proved to be what Taylor now calls one of the most significant dates in his life. Not only did that 911 call lead him to skilled EMTs, doctors, nurses, and surgeons who literally saved his life, but it paved the way for another call to his heavenly Father that saved his soul.

After calling for an ambulance, Taylor, now feeling extremely hot, sat on the porch steps to get some fresh air and wait for his ride. His memory from that point on is rather vague – he remembers being in an ambulance, given a nitroglycerin pill, and one of the EMTs saying, “I need the paddles.” That is the last memory Taylor can recall before being awaken by someone slapping his hand in Iowa Methodist’s cath lab in Des Moines. 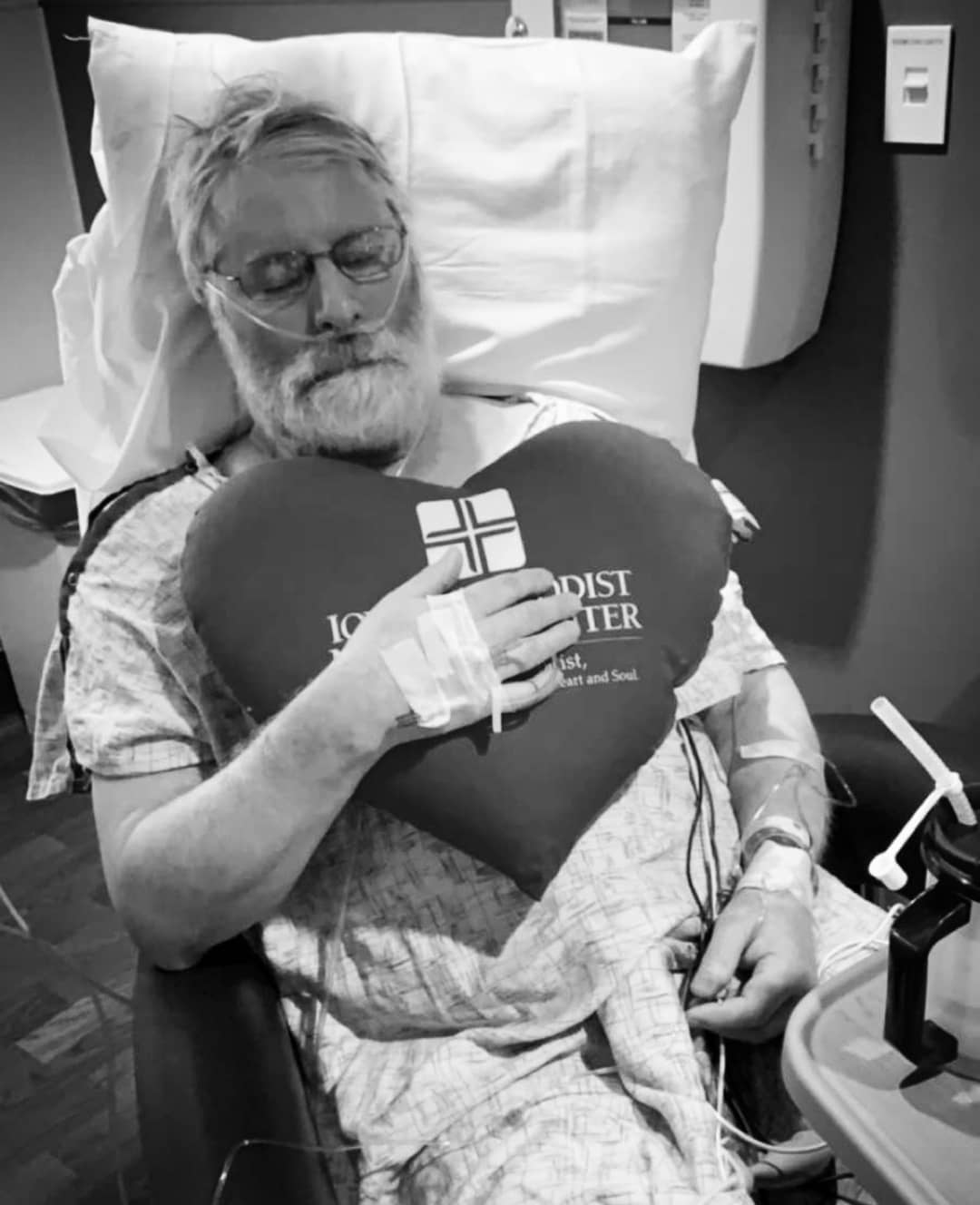 Taylor was transported directly to Iowa Methodist where the first procedure to place an intra-aortic balloon pump (IABP) was done to keep the blood supply to the heart at adequate levels. Taylor spent the next three days in the intensive care unit recovering from the first procedure. In his mind, he thought everything was going well but he was quickly grounded by the nurse. Rather than waiting to be released from the hospital, Taylor was remaining hospitalized to gain strength for the next mountain to climb, quadruple bypass surgery.

Waiting, with stable vitals in the hospital for the critical surgery, provided a lot of down time. While lying in a hospital bed on Sunday, Mar. 17, a time of reflection, regret, remorse, and ultimately rebirth marked another red-letter date for Taylor. That night, after remembering the first time he accepted Jesus as his Savior as a 10-year-old at church camp, and regretting the rebellious teenage years he spent as a “preacher’s kid” and the 50-plus years he spent rebuking God, Taylor poured out his heart in a “talk with God.” When everyone else had gone home for the night, that empty hospital room was where Taylor was overcome with emotion and asked God for forgiveness of sins and to “heal my hard, frozen heart.”

The next morning, Taylor woke up with a sense of peace and calmness he had never experienced before. He was about to undergo a risky and complicated surgery to mend his broken heart, but deep down, Taylor already knew his heart was as full and healthy as it had ever been. 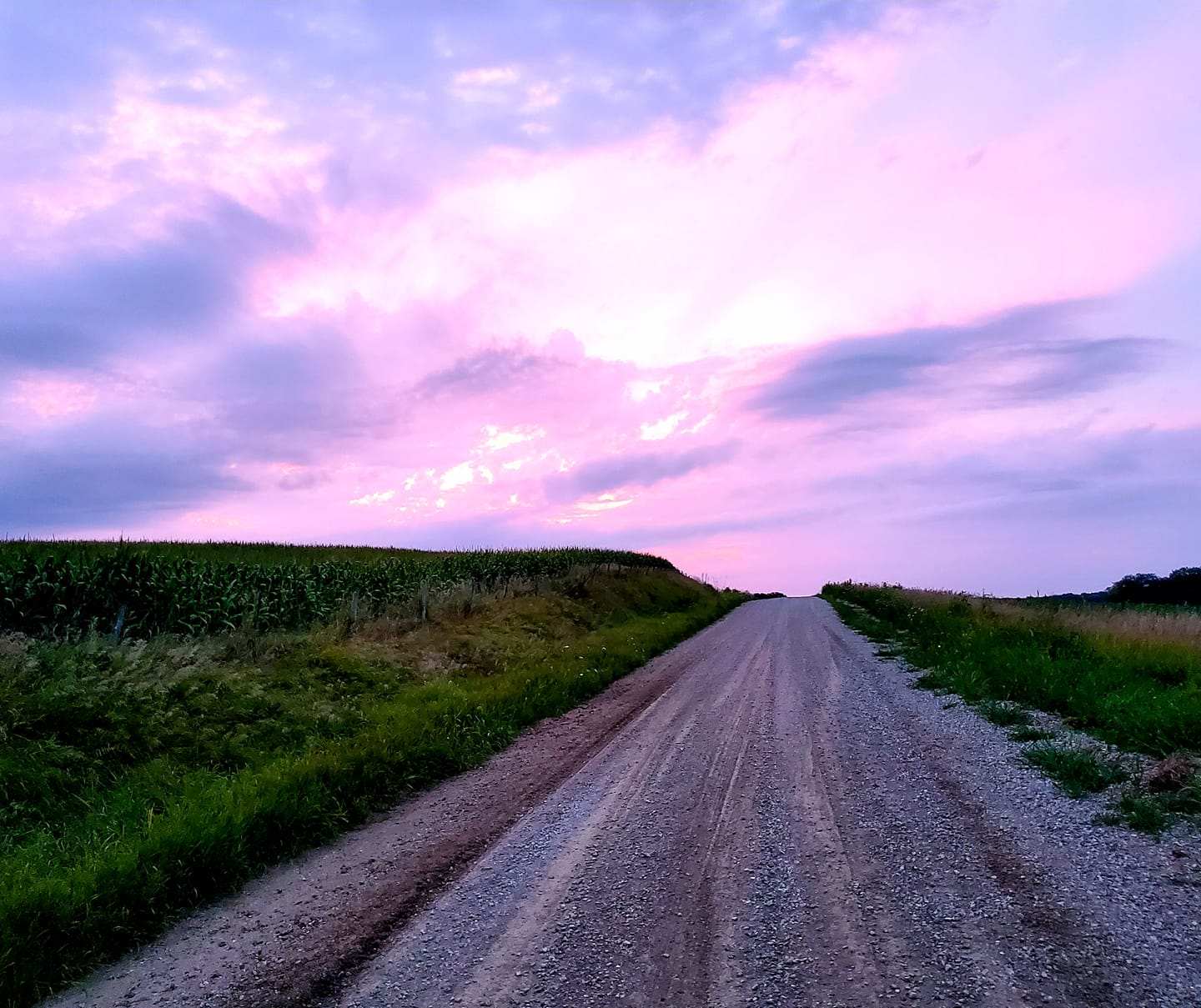 Randy took this picture on one of his morning walks during rehab. The hill in front of him resembled a mountain at times, physically and metaphorically, as his heart attack and subsequent rehab journey included highs and lows that tested him physically, mentally, emotionally, and spiritually.

“I put my life in His hands,” said Taylor. “I told myself that if after surgery I woke up talking to my dad in heaven or with my family on earth, I was ready to accept whatever The Lord had in mind for me.”

Taylor did indeed wake up in the recovery room after skilled surgeons rerouted and improved the blood flow that fed his heart. In Taylor’s case, one artery was 100% blocked, two were 85% blocked, and the fourth wasn’t even checked. Doctors just assumed it too had significant blockage and needed repair. “When I actually woke up, I could see my wife looking down at me. I just remember the tears and thanking God that He saw fit for a little more time on earth. There is no doubt in my mind the doctor and staff at Iowa Methodist Hospital were guided by God’s hands,” said Taylor.

With the surgery behind him and riding a spiritual high, Taylor spent more time in the ICU before graduating to a general room and eventually, getting released from the hospital. Despite his new lease on life, the climb ahead was steep. The initial stage of rehab was made tougher due to gout. “My right knee and ankle were swollen up twice the size. They wanted me to walk but I couldn’t walk ... not because of my heart but because of the 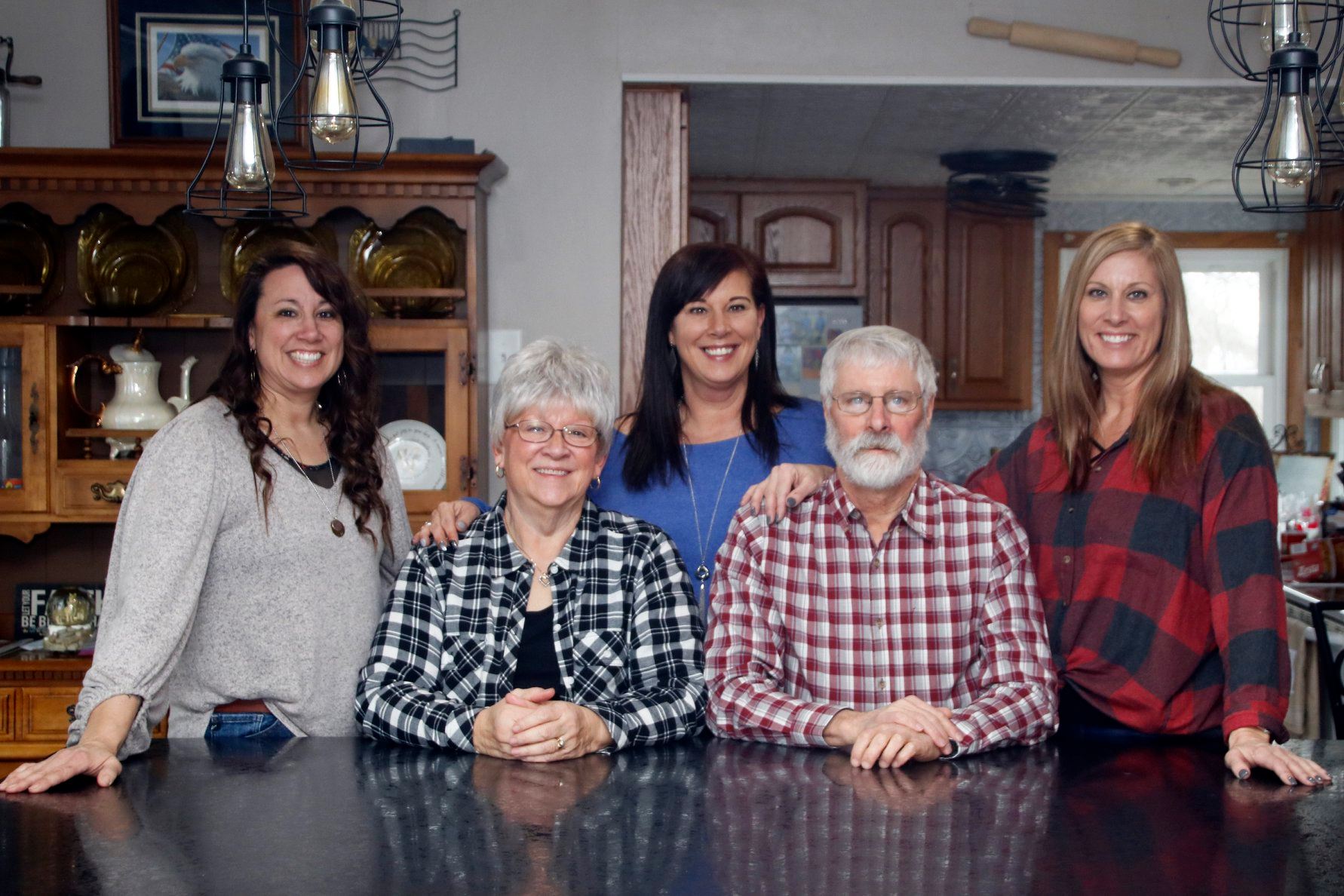 Taylor and his wife Pat, seated next to him, live in Galesburg. The duo felt the love of their family and community following Taylor’s heart attack last spring. Here they are surrounded by their daughters, from left, Samantha Collins, Melissa Truong, and Aimee Pleima.

gout,” said Taylor. Treating the gout with medication proved to be tricky since the normal prescription of steroids interfered with the new heart medication. “It was one thing after another,” said Taylor. “They couldn’t treat my gout because of my heart. I couldn’t work on strengthening my heart because of the gout.”

The gout eventually was resolved and allowed Taylor to focus solely on healing. Two days after he returned home, he, with a walker in tow, hit the streets of Galesburg with Pat. For the next five weeks, he walked with Pat and family members a few blocks at a time. He soon lost his walker, regained strength, and graduated to longer walks before being approved for cardio rehab.

Part two of this story will appear in the Mar. 19 Hometown Press.