Prime Country BBQ and Catering founders Mark and Vicky Huizer, on the left, have been mentoring new owners Paula and Terry Nikkel, also owners of Coffee Cup Cafe, the past few months in preparation for the business sale and transfer.

After eight years of serving local communities and faithful patrons mouth-watering BBQ and sides,  Mark and Vicky Huizer, owners of Prime Country BBQ and Catering, have decided to hang up their aprons. Fortunately for fans of the delicious BBQ fare, Terry and Paula Nikkel – owners of the famous Coffee Cup Café in Sully – have purchased Prime Country and will add another facet to their restaurant.

“We really had no idea this spring when we started year eight that this would be our last year, but we both felt in June that we really were ready to be finished,” said Vicky of the Prime Country sale.

Prime Country evolved from Mark’s hobby of smoking meat. Since turning that hobby into a career, the past eight years have been full of tremendous growth for Mark and Vicky. They, along with family members and a devoted staff of employees, move at a near non-stop pace making and serving meals for private and corporate events, small town festivals, and nearly everything in between during the busy catering season.

Over the years, Prime Country has become a favored caterer for weddings and other private celebrations, corporate events, Pella in the Park, Knoxville Nationals, and more. “Our business from day one just exploded for us. We were so blessed with the whole community embracing our new venture,” said Vicky. Some of Prime Country’s highlights over the years include serving faithful customers at Tulip Time and Pella in the Park, race fans at Eddyville Raceway Park and Knoxville Nationals, and connecting with many customers acquired through corporate events. “Our biggest day was serving 4,000 people in one evening,” said Vicky of a catering event for Vermeer Mfg. in Pella. Prime Country’s reach has also expanded into the homes of faithful customers who have taken advantage of the Huizers’ holiday meal prep. For the last several years, the Huizers have made Thanksgiving easy by providing hot and ready-to-serve meals on Thanksgiving. In 2020, the Huizers hit their maximum limit of 700 meals on Thanksgiving Day. “It’s been a whirlwind for eight years for sure,” said Vicky.

While Prime Country BBQ’s brisket and pulled pork have always been crowd favorites, their sides including mac n’ cheese, cheesy potatoes, peach and triple berry cobbler, and lemonade shakeups have also gained in popularity. Faithful customers of Prime Country BBQ and Catering will be happy to know the new owners, Terry and Paula, have been working alongside the Huizers the past several months and will be using the same tried-and-true recipes when they take over the business officially on Oct. 15.

The decision for Terry and Paula to purchase Prime Country, in addition to running the Coffee Cup Cafe, was an easy one considering their goals and the staff they already employ. In September of 2020, the Nikkels started Coffee Cup Cafe’s kitchen expansion after purchasing the building that once housed Van Der Zyl and 1st State Insurance the month prior. They were initially contacted by the Huizers about the purchase of commercial kitchen equipment. Both business owners discussed details and soon realized the Nikkels were ready and willing to take over the entire operation – both the commercial kitchen equipment as well as the Prime Country BBQ catering trailer. The purchase of the kitchen equipment gave new life to the Coffee Cup expansion and those plans started moving forward again this past July.

“While we were talking about the equipment, they mentioned the business might be a good fit for our family,” said Paula. Given family entrepreneurship runs deep for the Nikkels, they decided to take the leap and purchase the entire Prime Country BBQ and Catering operation. The Nikkels’ daughter, Christine, and her husband Brady  Van Wyk were already great help with the cafe, and they were fully on board with the expansion. Brady will work full-time at Prime Country BBQ and Catering, as will Terry, who previously worked alongside Paula at the cafe while running his own construction business. The transfer of businesses and work responsibilities is truly a family affair – the Nikkels’ nephew, Nathan Nikkel and his wife Tasha, are continuing on with Nikkel Construction while Terry and Paula now focus their full-time efforts in the food industry.

Since agreeing to the business purchase in June, the Nikkels have been working alongside Mark and Vicky to learn the concessions side of business and familiarize themselves with Mark’s methods of smoking meat.

“We will continue to run Prime Country the way Mark and Vicky have. They are amazing at what they do! Every event is entered into with as much perfection as possible,” said Paula. “We are truly thankful for the time we've had with Mark and Vicky as teachers, encouragers, and friends.”

Paula said they will operate the Coffee Cup Cafe and Prime Country side by side and already have several weddings, graduation parties, and corporate events booked for 2022. The Prime Country BBQ and Catering trailer will continue to open up its serving windows at Tulip Time, Pella in the Park, Knoxville Nationals, and Eddyville Raceway Park. “A lot of prayer has been done from every party during this process. We all have customers that are close to us, and we treasure deeply,” said Paula of the decision to take on another venture. In addition to the tried-and-true Prime Country items on the menu, Paula said they may add a few Coffee Cup Cafe specialities to the catering trailer.

For the Huizers, life after Prime Country will involve a lot more family time. The same family and friends that worked alongside them are the ones who will now fill up their evenings and weekends in a more relaxing manner. “One of the biggest reasons we decided to move on to another venture was our kids, grandkids, and friends. We just decided we want to have our nights and weekends again,” said Vicky. “We absolutely could not have had the successful journey that we had if we wouldn’t have had so much support.” In this new season of their lives, Mark plans to do some truck driving, and Vicky is keeping her options open. “We are not ruling anything out for the future. We will just see where we are led and watch for opportunities,” said Vicky.

Opportunity for the Nikkel family involves meeting new friends and customers as they expand in the food and hospitality industry. They will continually strive to bring great food and friendly service to the faithful clientele of both businesses. 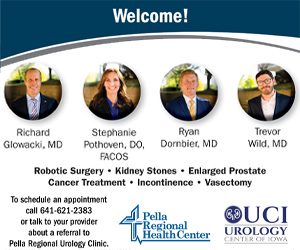