Volunteer fire departments from Sully, Lynnville, and Kellogg were called to Sully Community Locker after a passerby saw a fire at 8:25 a.m. on Sunday, Oct. 16. The business opened in Sully 70 years ago this month.

Current owners Jared and Stacey Nikkel of rural Sully, who bought the business in 2012, were vacationing in Minnesota when they received word of the fire at their business at 407 7th Avenue in Sully. The fire is of undetermined origin, according to insurance adjusters.

Jared said all business records are intact; however, the building received extensive fire, smoke, and water damage. The Nikkels met with insurance adjusters on Monday. Lost were 10 head of hanging beef and six head of hanging hogs, as well as locker equipment and the contents of the 16’ x 32’ walk-in freezer locker area at the business because of water damage. People’s meat, etc. in rented lockers had to be disposed of. 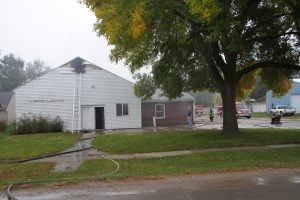 Warren Terpstra, a former owner of Sully Community Locker, surveys the damage to the front of the 70-year-old business.

The Nikkels will be in contact with the over 200 customers who had meat in locker storage. The owners appreciate everyone’s patience during this time. Customers with questions should call the locker at 594-4240 and leave a voicemail, which will be replied to soon.

“We’re going to rebuild and get going again as soon as we can,” Jared said. “It’s kind of up in the air as to how long that will be.”

“Thank you to everyone for the prayers and well wishes today,” Jared said on social media Sunday. “The support of family, friends, and community has been wonderful and makes us very grateful. We don't know what the future holds, but we know the One in control and are sure of His goodness and faithfulness. We have more questions than answers right now and will begin the work of figuring it tomorrow. We do hope to rebuild, but regardless, we know this is the start of something new and good - whatever that may be. Thanks to everyone again.”

Streets surrounding the locker were closed off by emergency vehicles to keep the area clear and community members safe.

No injuries were reported.

Due to the fire requiring a large amount of city water used to fight it, a few residents experienced isolated incidents of rusty water Sunday.

The fire was the second fire in less than 10 hours local firefighters responded to. Volunteers on local emergency response teams pulled long hours over the Oct. 14 weekend. Shortly before midnight on Saturday, Oct. 15, the Sully Fire Department responded to the Dakota Access Pipeline equipment fire near Reasnor. The crew spent several hours fighting the blaze and many didn’t return to their homes until 4 a.m. After only a few short hours of rest, the pagers of volunteer firefighters went off again at approximately 8:25 a.m. on Sunday, Oct. 16. Many of the same volunteers rushed back to the fire station to fight the fire that caused extensive damage to the Sully Community Locker. Sully Fire Department Chief Mike Vander Molen said volunteers with the Sully Fire and Ambulance Department were called to the scene of an emergency 12 times in 14 days.