Woodworking for a mission

Vernon Hartgers, 79, of Sully is a self-taught woodworker who has recently found a mission-minded application for his talent of over 30 years.

This past winter, Vernon and his wife Marge needed major surgeries, which greatly affected their abilities to take care of day-to-day tasks while they both were recuperating. Their church family members from the Heart of Worship of Lynnville stepped in and helped with many of these tasks for Vernon and Marge, especially meal preparation, and for this, the two of them were extremely grateful.

Both of Vernon’s hands were operated on, which could have had a large impact on his future as a woodworker. But, his operation was a great success, and Marge was very happy with her surgery results as well. 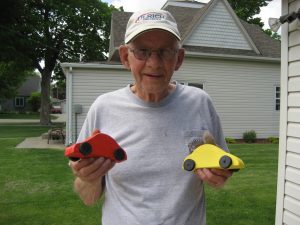 Vernon Hartgers is on a mission to make and distribute 2,000 handmade toy cars to children around the world.

Because of how he had seen his church community take action in his and Marge’s lives when they needed it most, and how he felt “the Lord was with us” throughout the entire healing process, the woodworker began to research how he could use his skills to “try to pay the Lord back.” Hartgers saw an article on the internet that piqued his interest about an 82-year-old man who had been creating little toy cars and giving them away—something Hartgers decided he wanted to do, too. The man in the internet story claimed that if he were to live another year, he’d have a million cars to his credit. After learning that the 82-year-old had seven other people working with him, Hartgers decided to set a smaller goal for himself, as he wanted to do his mission work by himself in his garage. 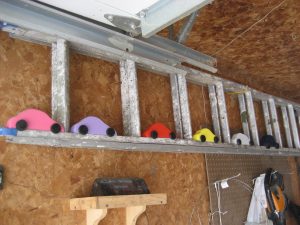 Several cars are on display on Vernon Hartgers' garage wall.

“My goal is to make 2,000 of these before I die,” Hartgers said with a smile. As of mid-May, he had already made 462 wooden toy cars, having started his project back in March.

With the help of the people of the Heart of Worship church, a home for these cars was found in the church’s mission work, where they will be sent to places such as Kentucky and even overseas to Africa.

Hartgers saws the shape of each car’s body from a two-by-four piece of lumber and also creates wheels for the cars from 3/8-inch plywood. The axles for the wheels are made from 1/4-inch dowel pins, and the bodies of the cars are painted in a variety of bright colors. He buys most of the raw materials himself, but occasionally someone who knows of his project will donate lumber to him.

Homes for most of the cars will be found through the church’s mission work, but Vernon and Marge always have a few toy cars with them when they go out for a drive. He estimates they’ve given away more than 30 cars on various excursions. 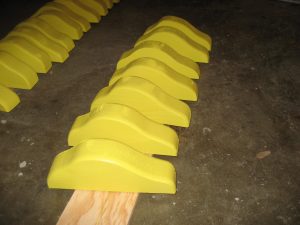 A multitude of cars drying after a fresh coat of bright yellow paint in Vernon’s garage.

One day outside of Jaarsma’s in Pella, Hartgers gave a car to each of two little boys, and “their mother was as happy as a lark.” On another occasion, Hartgers was visiting with the dad of a little boy sitting in his car seat, and he wanted to give a car to the youngster. The dad rolled down his car window so the little boy could speak to Hartgers and, clutching his new toy, grinned and said, “Tank Yew! Tank Yew!”

Hartgers has made a variety of pieces of wooden structures over the years, including dressers, dining room tables, doll furniture, and even a rabbit hutch. But, he now devotes almost all of his talents toward the little wooden cars, with an occasional special project thrown in for good measure. He gets a unique pleasure out of giving these cars to kids.

“If anybody wants some cars, get ahold of me,” Hartgers insisted. He, of course, still has plans to give away 2,000 cars. This labor of love allows Hartgers to “try to pay the Lord back” for the blessings he has received.