Historical railroad continues to chug through small town of Searsboro

Most towns like Searsboro with populations under 200 do not have lighted railroad crossings complete with warning gate arms. As of last fall, warning lights and gates are operational twice a day at the railroad crossing at the south entrance to town. The railroad placed the warning lights, and the City of Searsboro had no part in the placement except they had to trim trees and paint railroad crossing signs on the street. Searsboro is the only area town that still has a railroad through it, traveling from Marshalltown to Eddyville and back each day. At one time, area towns of Killduff, Lynnville, Sully, and Taintor all had a railroad or a railroad spur.

Searsboro Mayor Kim Shutts points out that the railroad actually is one of the reasons Searsboro became an incorporated town on Aug. 20, 1876. According to the Searsboro centennial book, the railroad was in the area before the town existed. Later, the railroad became a major employer in Searsboro as two section crews worked out of the town for a number of years. These crews numbered to 25 men or more during some seasons of the year. 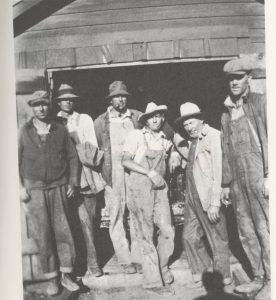 Responsibilities for these crews included inspection of the tracks, repairing bridges, replacing ties and damaged rails, cutting weeds, and removing snow. As things became more mechanized, the size of the crews decreased, but section crews continued to work out of Searsboro until the mid-1950s.

Shutts also said, “Reading through the centennial book, people were really happy for the railroad. Not only did it help the economy of Searsboro, it also was the only way some people had for getting to and from Grinnell and other area towns. On a personal note, I do remember my grandmother talk about how she and her kids and sister would take the train to St. Louis to visit her family. This had to have been in the mid-1940s to ’50s.”

Some history of the railroad in Searsboro reprinted from the Searsboro centennial book includes:

“In 1858, a charter was issued for the construction of a railroad from Albia on the south to Mitchell, near the Minnesota border. This 200-mile section of rail line was to be built by the Iowa Central Railroad Company and was to become part of the line from St. Louis to St. Paul.

“By the time of the Civil War, the grade was completed, but the war delayed funds for the completion of the line. Through pressure exerted by J.P. Grinnell and others, the necessary funds were made available so the track could be laid. One construction crew worked from the north end of the line and another 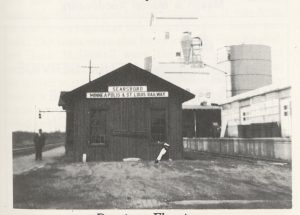 Early photo of the elevator and depot in Searsboro for the Minneapolis and St. Louis Railway, scanned from the Searsboro centennial book.

worked from the south end. They met at the Poweshiek-Mahaska County Line, and the last spike was driven in February 1871. The day the line was completed, trains began to run on the line. The Minneapolis and St. Louis line and the Iowa Central Railroad Company were separate lines but operated as one system until 1912 when they merged….

The first major train derailment at Searsboro occurred Monday, Jan. 31, 1944, when a south-bound double-header freight train crashed into the rear of another freighter that was stopped north of the Searsboro Station. George Robinson, the engineer of the double-header freight train, was killed outright in the 16-car derailment. The driver of the first engine was Louie Eker. He was taken to Mahaska hospital in Oskaloosa where the middle finger of his left hand had to be amputated. Several other trainmen were treated for minor injuries.

Approximately three weeks later, there was another derailment that occurred about a half mile north of the previous one. It was a similar accident where the first train had trouble and had to stop just past a curve. The second train came around the bend and rammed into the back of the stopped train. Remarkably, no one was injured in the 39-car pile-up. Upon investigation, it was discovered two of the derailed box cars contained 500-pound military bombs. A crew was called in from Omaha to deactivate the bombs.

The last train wreck occurred on a Sunday morning, Nov. 22, 1964. The 29-car pile-up was caused by shifting bridge timbers that slid over and caught a switch stand.